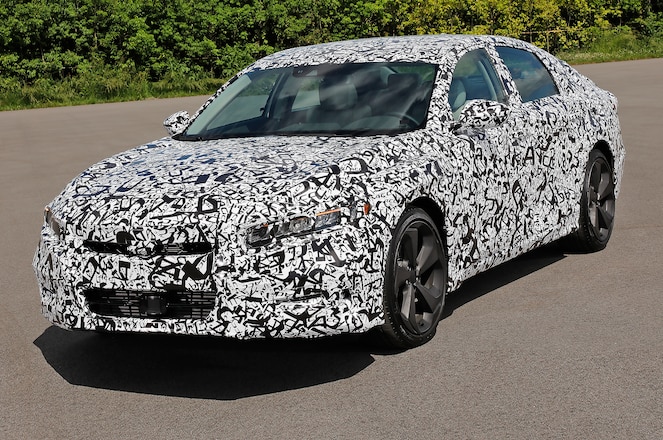 Honda announced that it will replace the V-6 at the top of the 2018 Accord's lineup with a 2.0-liter direct-injection turbo-four tuned to deliver torque at very low RPMs. It will be paired with either a manual or a new 10-speed automatic.

That means the new, 10th-generation Accord will have three available engines. Joining the 2.0T, which is a differently tuned version of the engine from the Civic Type R, will be the 1.5-liter turbo-four at the bottom of the range paired with a CVT or a six-speed manual. A hybrid Accord will have a 2.0-liter naturally aspirated engine.

The news was announced at a gathering of automotive media at Honda's R&D center in Tochigi Prefecture, Japan.

Honda has generally always gone its own way with transmissions, shunning planetary gears. The 10-speed automatic breaks with this tradition and contains four planetary gear sets. This will mark the first time a 10-speed transmission has been used in a front-drive passenger car, Honda said in a release. 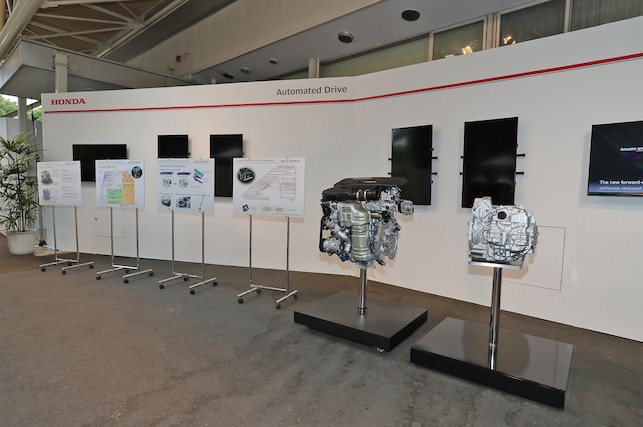 A handful of automotive journalists were invited to Honda's R&D facility in Utsunomiya, Japan, to briefly drive the new powertrain—inside a camouflaged 2018 Honda Accord prototype. It was far too short a drive to determine much, but not much seems to be lost versus the outgoing V-6 engine. And the transmission is an improvement.

Significant torque could be felt well below 2,000 RPM, and the 10-speed transmission, with its wider range, helped the Accord get off to quite a quick start. How quick, Honda wouldn't say yet, but Jungi Yamano, Honda's chief engineer on the project, said the new powertrain wouldn't disappoint and would best the V-6 in performance and economy.

"We are confident of that," he said.

Back on Honda's proving ground oval, we made a couple not-scientifically tested acceleration runs from 0-60 and some typical passing sprints. The transmission was extraordinarily smooth—no bumps or hesitations—going through the gears during acceleration. It didn't spend any time hunting for gears and was quick to kick down and skip gears while executing the kind of acceleration that comes with highway speed. And changing our own gears via the paddle shifters was similarly responsive, even on a string of downshifts as if prepping for a curve. That was in sport mode.

We've already seen this engine, which is in the new 2017 Civic Type R. The block and most of the parts carry over to the Accord installation, but output has been dialed back, largely for optimum efficiency.

Also keeping things efficient is improved exhaust-gas recirculation, and a two-piece water jacket rests above and below the exhaust port to allow heat transfer from a larger surface area.

A good portion of the new low-end torque is credited to a low-inertia turbocharger that doesn't take much time to build boost.

Working to reduce NVH is a semi counter-forged crankshaft and a secondary balancer.

Honda would not detail performance specifications and said mileage has yet to be certified. It did confirm the new 2.0 turbo would not require premium fuel. An engineer said the whole package is lighter, even with the extra speeds of the new transmission.

Honda folks normally bristle ifasked questions about which cars from other manufacturers were benchmarked, or used as reference points, when designing the 2018 Accord. Honda believes it can make for satisfied customers without copying others. But when pressed, they admit they set a high bar for this Accord: They wanted it to feel like a Lexus ES, or a C-Class or even E-Class Mercedes.

Not much else could be determined about the next-gen Accord. The interior was heavily padded and cladded and the exterior was draped in camo.

We've seen some spy shots of camouflaged Accords recently, but Honda was tight-lipped about anything but the powertrain, except for Jeff Conrad, senior vice president and general manager of American Honda Motor Co., who said: "Just as the new Honda Civic injected new energy into the compact car segment, we expect this all-new 2018 Accord will make people rethink the midsize sedan."

The 1.5-liter turbo and 2.0-liter turbo engines will be produced at Honda's Anna, Ohio, plant. The new 10-speed automatic transmission will be built at the company's plant in Tallapoosa, Ga. regardless of where the Accord is built.

We'll get a full glimpse of the 2018 Honda Accord in the fall.