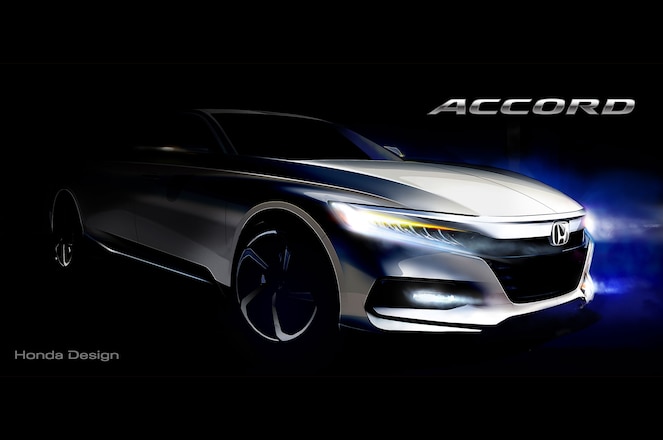 Honda dropped a ton of info on the next-gen Accord earlier this month, and now it's giving us our first glimpse of the midsizer's front end with a new teaser sketch. In addition, the automaker announced that the 2018 Honda Accord will debut on July 14 in Detroit.

In the sketch, the Accord wears Acura-like headlights with LED projectors and vertical lighting elements that resemble the Honda luxury division's "Jewel Eye" lamps. The grille features a horizontal chrome bar similar to the Civic's, and the lower valance has a reverse-trapezoidal shape. The entire front fascia appears to be lower, giving the car a sleek, sporty look. 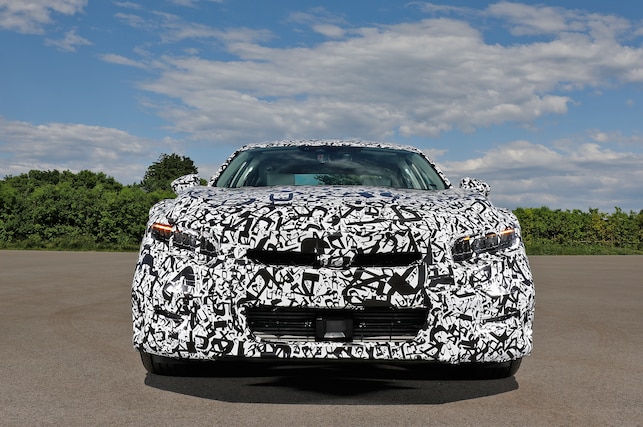 The rest of the car is obscured by shadow, but we know from camouflaged prototypes that the 10th-gen Accord will get a more raked roofline. Honda revealed the next Accord's powertrain lineup in early June, confirming that the V-6 engine option will be dropped in favor of a turbocharged 2.0-liter I-4 derived from the unit found in the new Civic Type R. The range-topping engine will be tuned for low-end torque and won't require premium fuel. The Accord will also receive the 1.5-liter turbo-four as a base engine, and the Accord Hybrid will use a naturally aspirated 2.0-liter I-4. The engines will come mated to either Honda's new 10-speed automatic transmission, a six-speed manual, or a CVT.

Honda will broadcast the 2018 Honda Accord's unveiling live on YouTube at 11:00 a.m. EST on July 14. Stay tuned for more details on the next-gen Accord.

Honda Tuning
The Coolest Soundbar in the Universe Crafted From A Porsche 911 GT3
The best soundbar of 2020 isn't from Sonos, Yamaha or even Sennheiser—it's this wickedly cool, special edition home speaker from Porsche Design.
Sam Du – Sep 30, 2020