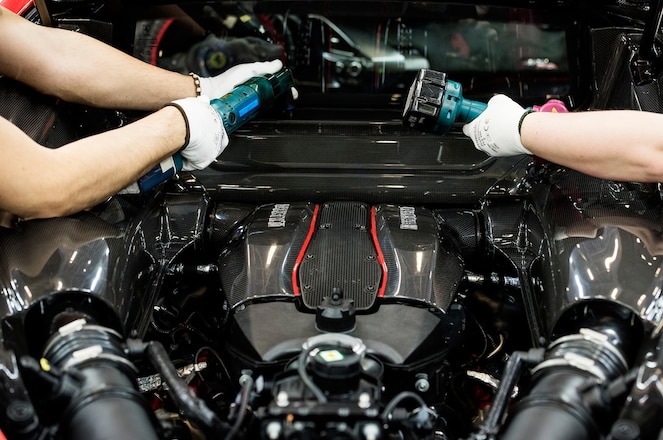 Ferrari is rightfully proud of its rich history of designing and building high-performance engines, winning races with them, and winning international awards for them. These include 21 different class awards in the Britain-based International Engine of the Year Awards (founded in 1999), including overall Engine of the Year honors for the 488 GTB's current 3.9-liter twin-turbo V-8 (code-named F154 CB) in 2016 and '17. The company is gunning for a threepeat by substantially redesigning and upgrading that engine for duty in its new 488 Pista. 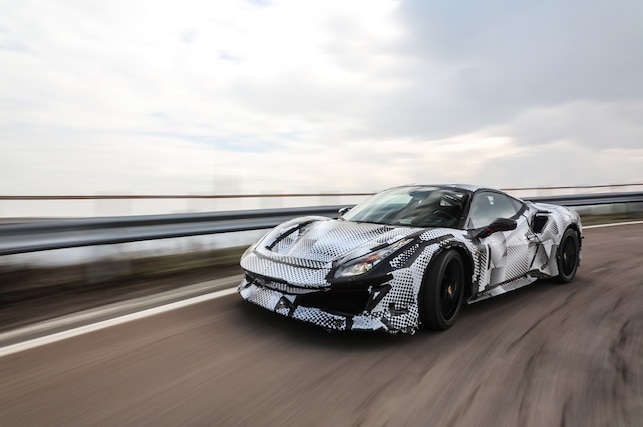 We shared what we learned about the Ferrari 488 Pista in the weeks leading up to its Geneva show debut in March, and then a week later the company invited IEOTY judges to Maranello for a deep dive into the engine tech and an opportunity to flog this road-legal track star on the famed Fiorano circuit and in the hills above the Scuderia's hometown. It was indeed a very good time to be an engine nerd, and after you read my nerdy learnings about this new F154 CD engine below, click by fellow IEOTY judge Angus MacKenzie's account of how the 488 Pista drives.

As recent race-ready street-legal Ferrari specials go, this one enjoys the biggest bump in output, gaining 49 hp and 6 lb-ft for an impressive total of 710 horses and 567 lb-ft. That tops prior V-8 special edition improvements like the 458 Speciale's gain of 35/0, the F430 Scuderia's 20/0, and the 360 Challenge Stradale's 25/0. It even tops the V-12-powered F12tdf's 38 horses and 11 lb-ft. How'd they do it? The nerdy way: by sweating small details that improve engine breathing, as well as reducing rotational inertia, friction, and turbo lag.

On the breathing front, nearly everything involved with inhaling and exhaling is new. To begin with, the engine-air intake moves from just ahead of the rear wheels to a high-pressure, cooler-air region near the rear spoiler. Air molecules are quickly filtered and sucked into the turbos (more about that in a moment) before passing through new 7 percent larger intercoolers that use all the cooling air entering those openings ahead of the rear tires. That means the charge-air delivered is a crucial 11 degrees cooler. Next the air flows into one of two carbon-fiber intake plenums, each of which is 41 percent smaller, before whooshing down one of four intake runners that are 60 percent shorter. The smaller intake tract is quicker to pressurize, but the main objective was altering the resonance supercharging effect. 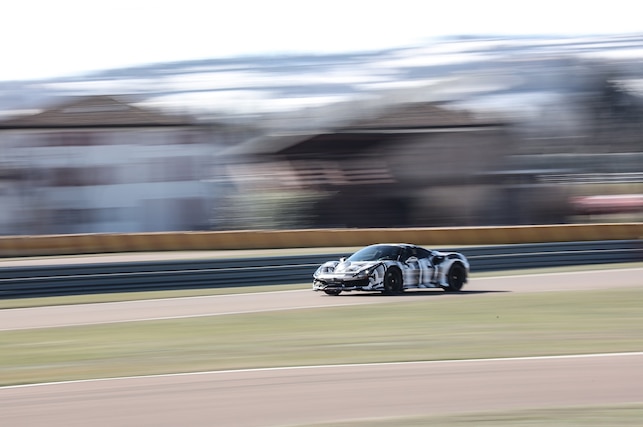 Here's how that works: When an intake valve slams shut, it sends a shockwave back up the runner that reflects off the open plenum and bounces back toward the valves. Instead of sizing the runners so that the returning shockwave helps cram a bit more air into the cylinder just before the valve closes again, these shorter runners produce a slight negative pressure just before the valve closes at high engine speeds. This, along with the better intercooling, actually helps reduce in-cylinder peak temperatures by about 12 degrees. A cooler cylinder reduces knock sensitivity, so the spark can be advanced to produce about 10 extra horses. Oh, and all valves open 1mm wider than in the base engine.

Exhalation starts out in a robotically welded Inconel exhaust manifold with 10 percent larger-diameter pipes that are also 30 percent longer for more optimal flow than in the stock engine's cast manifolds. Together, they also weigh 21 pounds less. From there, it's a whoosh through the turbos, the catalysts, the muffler, and out the back of the car. This thin-wall (1mm) exhaust plumbing yields an engine note that's 5-8 decibels louder inside. The frequencies are also said to be higher and better in quality, but no turbo Ferrari's baritone note will ever be mistaken for a naturally aspirated one's soprano wail.

On the rotational inertia front, the counterweights on the flat-plane crankshaft's middle throws are trimmed for a 2.6-pound weight savings, and the flywheel is lightened by a further 3.3 pounds. F1-style titanium connecting rods save a total of 3.7 pounds and stand up better to the 10 percent greater structural loads generated by the higher (1,740-psi) peak cylinder pressures. Toward that end, the pistons also get thicker crowns and wrist pins with a new diamondlike carbon coating material for reduced friction. Compression increases from 9.4:1 to 9.6:1. New hollow intake valve stems save almost a half ounce each, which is meaningful at the speeds they're bouncing up and down. Total rotational inertia is down by 17 percent, so the engine's eagerness to rev improves by that amount. A lightened A/C compressor, thinner cylinder liners, and assorted other weight trimmings add up to an engine that's 40 pounds lighter. 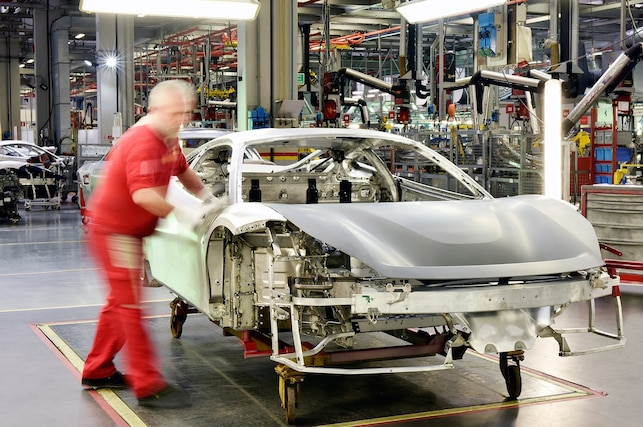 On the turbo-lag-reduction front, the IHI/Honeywell turbos already use ultra-light titanium aluminide turbine wheels, which Ferrari machines along with the seal plates behind them. Those seal plates use "abradable seals" that minimize the compressor-seal gaps to improve efficiency by 2 percent. New ball bearings reduce friction in these turbos by 30 percent, and peak boost rises from the standard 488's 20 psi to 22 psi. Another big turbo upgrade is the addition of Hall-effect speed sensors that count the turbine blades as they pass to more precisely determine each turbo's exact speed. Every turbo has a maximum permissible speed, and engines that compute turbo speed from other engine parameters can't push the turbos right to their limits as this one can.

Ferrari really wanted this turbo engine to feel like a naturally aspirated one, and that mission appears to have been accomplished. Their metric for this: time to 90 percent power when matting the accelerator from a 2,000-rpm cruising speed in third gear. The 458 Italia took 0.6 second, the 488 Pista needs 0.8. Another measure: time to peak intake plenum pressure when transitioning from 40 to 100 percent throttle opening, which is 0.3 second quicker now. Another measure: The official Fiorano lap time drops from 1:23.0 to 1:21.5.

Some of the above parts are borrowed directly or adapted slightly from the racing versions of the F154 engine that go in the 488 GTE and Challenge cars: the turbos, crankshaft, exhaust manifolds, and cylinder liners. Brand-new for this engine are the titanium con-rods, intake plenums, intake valves, pistons, pins, and camshafts. In all, 50 percent of the F154 CD parts differ from those of the base 488's CB engine. Oh, and one final bit of cake icing: The Pista's Euro-spec CO2 emissions drop from 0.39 to 0.37 grams/kilometer. #PistaSavesThePlanet! 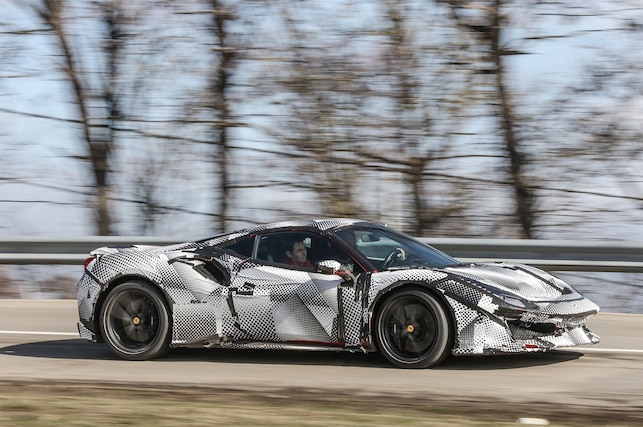