A look at how far the compact sedan has come

The 2019 Volkswagen Jetta may be the largest, most advanced Jetta yet, but 38 years ago things were much simpler. The first Jetta arrived in the U.S. in 1980, joining a VW lineup that included the Dasher, Rabbit, Scirocco, Vanagon, and Pickup. The Jetta was closely related to the Mark 1 Golf, or Rabbit in the U.S. Six generations later, the Jetta continues to rely heavily on the Golf for its mechanicals, but a lot of other things have changed, as these photos show.

Since that very first model went on sale, VW has sold more than 3.2 million Jettas. The sedan's name means "jet stream" in German, and it was marketed as a Rabbit with a trunkâbecause that's exactly what it was. Cover the trunk with your hand and you can easily see the iconic lines Giorgetto Giugiaro penned for the first-gen Golf. Speaking of the trunk, the 1980 and 2019 models' 14.1 cubic feet of trunk space is the only common measurement between the two.

VW recently acquired and restored a 1982 Jetta and showed it off at this year's Chicago auto show, where the 2019 model made its debut. When you compare it with the 2019 model, you can really see how far it has come in nearly four decades. The family resemblance is still there, but the cars themselves are worlds apart. 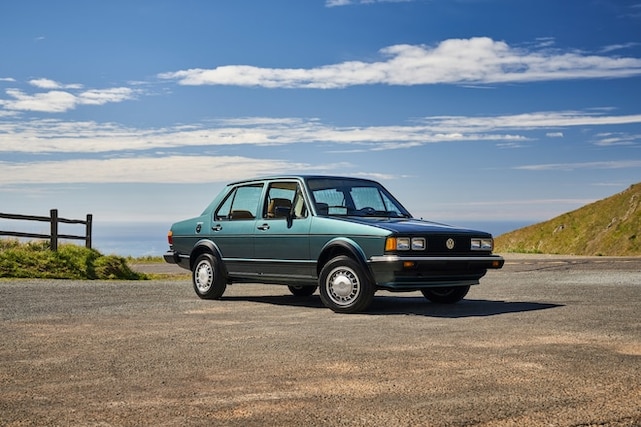 Today's Jetta is packed full of driver-assistance gizmos including a blind spot warning system, digital cockpit, rearview camera, and one or two USB ports depending on trim.

The 1980s model didn't have anything like that, but we can still appreciate it for its bargain basement charms and price tag to match—the original base price for a 1980 Jetta was $7,650. A 2019 Volkswagen Jetta starts at $19,395 and will arrive at dealers just in time for summer.