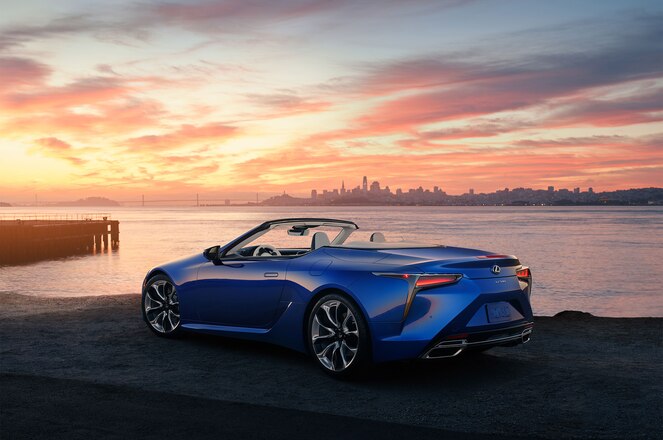 In an automotive world that includes far too few convertibles, Lexus is reentering the segment by slicing the top off its long-hood, short-deck, big-engine LC 500 coupe. We're happy to report the top-ectomy surgery was a success—at least from an aesthetic standpoint—and a read of the post-op report of what was done to account for the structural loss of the top makes us optimistic the drive of the 2021 Lexus LC 500 convertible will match its looks.

The structural compensation begins with the addition and relocation of various structural braces, as expected. In the rear there's a new die-cast aluminum suspension brace, and a reshaping and relocating of the upper suspension-tower brace. In front, the un-sprung weight has been trimmed, which helps improve ride quality and to offset some of the weight added for structure. Despite these weight-saving measures, Lexus specs indicate the LC 500 convertible gains about 217 pounds over the coupe for 4,500 pounds total. 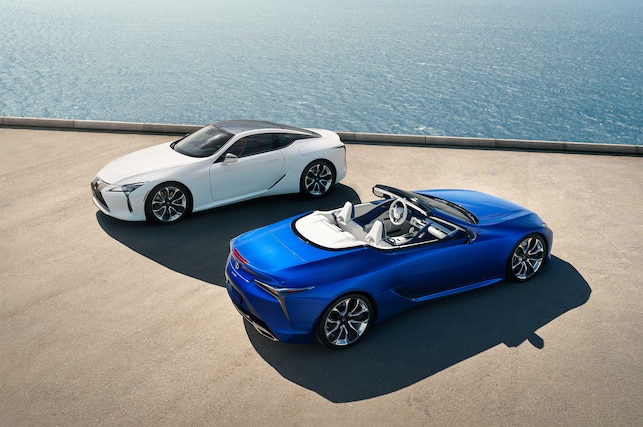 By specifying a soft top instead of a folding hard top this time out, Lexus greatly simplified the task of making its new LC 500 look beautiful, and completely sidestepped the junk-in-the-trunk booty of its SC 430 predecessor. The top features four layers, and it lowers and raises in 15 or 16 seconds (respectively) at speeds of up to 31 mph. As is expected nowadays, it stows beneath a rigid folding tonneau cover.

The top is available in black or beige to coordinate with nine exterior colors (Ultra White, Smoky Granite, Liquid Platinum, Atomic Silver, Obsidian, Caviar, Infrared, Cadmium Orange, Flare Yellow, and Nightfall Mica) and three interior colors (black, Circuit Red, or Toasted Caramel). Or you could pony up for one of 100 special Inspiration Series cars, which will get a blue top, Structural Blue paint, and a white semi-aniline leather interior with 21-inch Chrome/black wheels. (Lexus will announce more details later, but the paint, leather and wheels would likely add $5,535 to a 2019 coupe.)

The rear of the car is subtly restyled to better match the lines of the folding soft top. Whereas the coupe's roof-rails/floating C-pillars point inward at the edges of the hard arc that defines the rear spoiler, without those visual cues in the LC convertible, a wider spoiler arcs from edge to edge of the trunk lid. It also kicks up a bit higher and incorporates the center stop lamp. Pop-up roll-over protection bars remain out of sight until needed, to preserve the sleek looks.

Keeping things cozy inside the open cockpit are aerodynamic touches that include a polycarbonate wind-blocker in back and a belt-line and rear compartment moldings designed to exclude wind. There's also an auxiliary wind-blocker that covers the rear seat area. Should cool temperatures threaten to chill occupants, the Lexus Climate Concierge combats them with an open-air mode that increases seat heater strength and airflow between the vent and floor registers and the neck heaters, taking care to warm the driver's hands on the steering wheel. 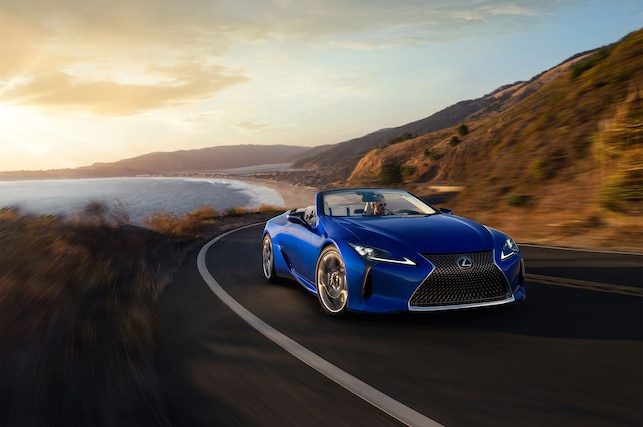 Sound-wise, that luscious V-8 engine note gets organically—not electronically—enhanced by a sound pipe that connects the cabin to the intake manifold, bisected by a flexible diaphragm that transmits the sound without the actual air (the V-10-powered LFA used a similar setup). There's also an active exhaust valve to manage back-pressure and exhaust rumble to optimal levels. Other active noise cancelation efforts plus sound insulation and absorbing techniques aim to limit the cabin din to just enough of the all right noises. The LC 500h hybrid isn't offered in convertible form, and indeed the LC 500's naturally aspirated V-8 sound track is now a unique selling proposition for the Lexus, in a field of Mercedes-Benz SL, BMW 8 Series, and Jaguar F-Type convertibles all featuring turbos.

Look for the 2021 Lexus LC 500 convertible to hit dealers in summer of 2020, but if you simply can't wait that long, you can always register for the Barrett-Jackson auctions, where Lexus will auction off a special early Inspiration Series car on January 17. 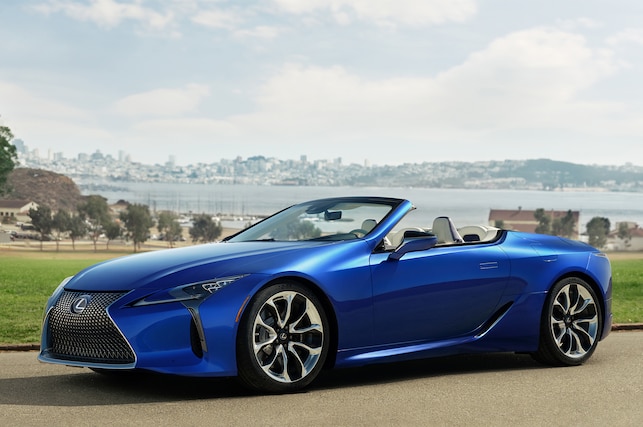