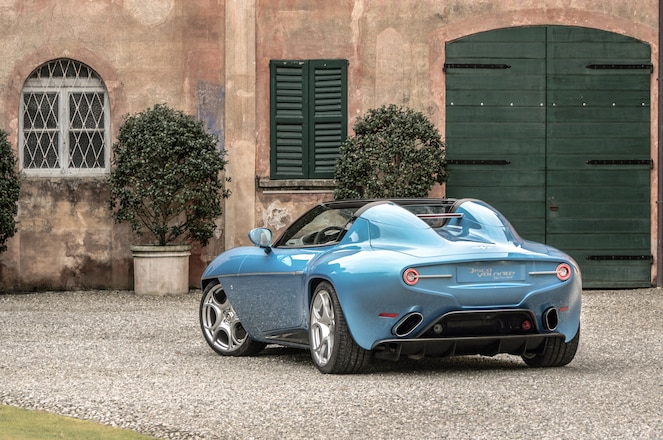 Built by hand, the Alfa Romeo Disco Volante Spyder features design cues from the Disco Volante coupe that debuted in 2012, including covered front wheel wells that are said to give a sense of speed and uncovered rear wheels that convey a sense of power. Most of the body work for the Disco Volante Spyder will be made of hand-beaten aluminum combined with carbon fiber to keep the car's weight low. Carbon fiber parts include the front bumper and grille, the hood, side skirts, the trunk lid, the windshield frame, the rear cross member, and the removable roof. Nomex filler is used in the hood and trunk lid for better stiffness and to reduce noise and vibration. 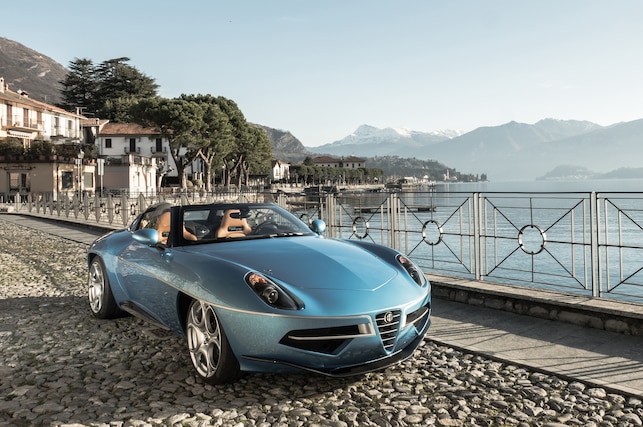 When it comes to mechanical bits, the donor car's steel space frame and structural elements are retained to guarantee torsional stiffness, high performance, and quality standards. Components such as the carbon fiber cell, the engine bay, and firewall remain untouched. The donor car's dashboard, instruments, pedals, and steering wheel also remain while door frames and the C-pillar are modified to match the rest of the car's shape.

Touring Superleggera retains the Alfa Romeo 8C Spider's engine, a 4.7-liter V-8 rated at 444 hp and 350 lb-ft of torque, for use in the Disco Volante Spyder. The rear-mounted six-speed sequential gearbox with paddle shifters also remains and keeps the car's weight distribution at 49/51 between the front and rear axles. Suspension components gain forged aluminum hub carriers while the limited-slip differential and carbon ceramic brakes are retained to ensure the car handles well. Touring Superleggera says that the Alfa Romeo Disco Volante Spyder can do the 0-62 mph sprint in 4.5 seconds and has a top speed of 181 mph.

The Alfa Romeo Disco Volante Spyder can be personally commissioned by a prospective buyer and customized based on his/her tastes. Touring Superleggera has also partnered with the leather company Connolly Bros. for the interior upholstery of the car, which includes a wide range of natural beige and black tones.