With another record shattered, Bugatti shows why it might be the ultimate hypercar marque 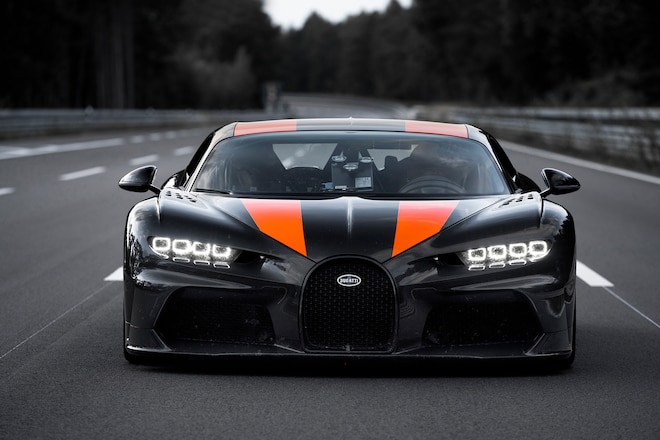 It's done it again: Bugatti has set a new milestone in hypercar performance and secured another world record. The brand established itself on superlatives, whether acceleration, power, or price. This time top speed was the target, and—it has accomplished its goal of sending a Chiron above 300 mph.

Specifically, it achieved 304.773 mph, on Volkswagen's Ehra-Lessien test track, where Bugatti previously took the Veyron Super Sport to 268 mph. Test driver Andy Wallace (no stranger to speed records himself) piloted the modified Chiron down the track's 5.4-mile straightaway toward uncharted limits of velocity.

The record-setting vehicle was no ordinary Chiron. Bugatti analyzed every element to allow it to surpass the already stupendous 261-mph top speed. Reducing aerodynamic drag was key to the accomplishment, and to that extent numerous changes were made to the body, including a widened horseshoe grille, flanked by more aggressive air intakes at each side. Ventilation was added above and behind the front wheels, and there appear to be different side sills. Critically, the body was lengthened nearly 10 inches by a cowling that wraps around the rear fascia, at the bottom of which a bespoke diffuser is mounted. The airbrake wing was removed to further reduce drag. 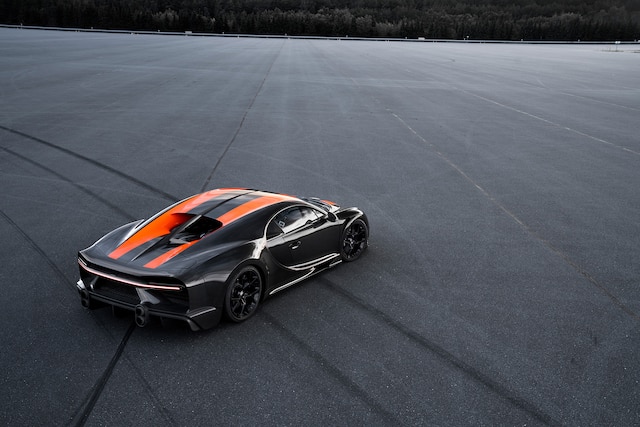 Also at the rear is a new exhaust setup visually similar the Centodieci shown recently at Pebble Beach, a possible sign of that car's more powerful quad-turbo 8.0-liter W-16 engine.

Power and aerodynamics mean nothing when a car's rolling stock won't suffice. To that extent, Bugatti worked with longtime partner Michelin to develop special tires that can handle speeds beyond 300 mph. Each tire was X-rayed prior to installation to ensure construction was absolutely perfect and would not oscillate or vibrate as speed increased; the tires are subjected to 5,300 g at the car's top speed.

The car is decked in raw carbon fiber and orange, the signature combination applied to Bugatti's record-attempt vehicles. Inside, the passenger seat was removed and a safety cage was installed. It's possible the changes seen here will make their way to a commemorative special edition Chiron soon.

Performance manufacturers have long set their sights on 300 mph, and Koenigsegg previously came the closest with a 277.9-mph top speed. By being the first to cross the barrier, Bugatti shows once again why it might be the ultimate hypercar marque. 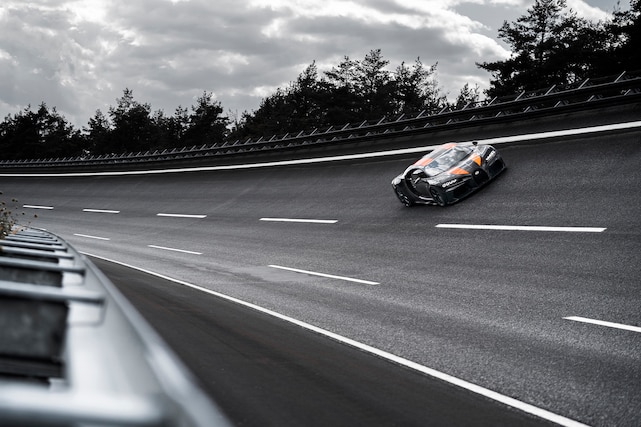