The shop that built time attack contenders and Ken Block's first "Gymkhana" WRX STIs takes the small crossover SUV to the next level. 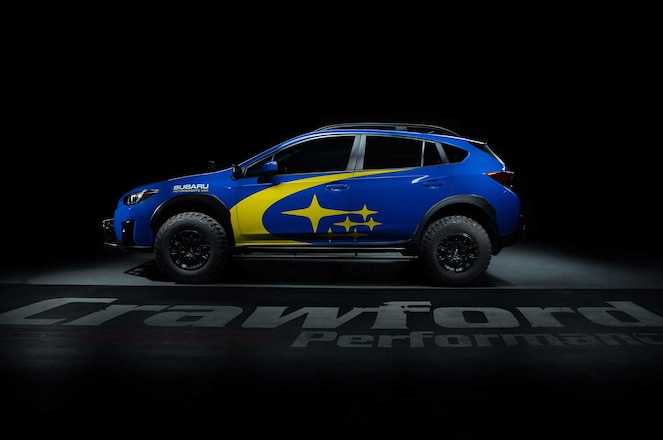 The Subaru Crosstrek is already more off-road capable than you'd expect—certainly more so than your typical small, car-based crossover. But say you want more; Crawford Performance has you covered, with an overly rugged-looking, seemingly overlanding-ready Crosstrek with huge wheels, gnarly tires, a suspension lift, and more. It also gets a Subaru WRX-style World Rally Championship blue-over-yellow livery.

Based off the 2019 Subaru Crosstrek Limited, the model was designed to bridge the gap between a fully built race car and a production Crosstrek. Clearly, this is one badass off-roader. The suspension lift adds two inches of clearance to the front and 1.5 inches to the rear—on top of the Subie's already substantial 8.7 inches of ground clearance from the factory. The custom Crosstrek also features a new front bumper, rear bumper, skid plate, rock sliders, transmission plate, and differential plate. Bulky lights on the front bumper, hood, and near the mirrors help you navigate when it's dark outside.

The model uses the same transmission and driveline as the regular Crosstrek. But the 2.0-liter boxer engine pumps out 167 hp, up from 152 hp on the standard vehicle. With all the aftermarket parts installed, the overlanding Crosstrek weighs 3,375 pounds. Crawford Performance is offering BFGoodrich mud terrain tires and a wheel package in development. Currently, the model sits on 15-inch Method Rally Series Series MR502 VT-Spec 2 Black Rims.

Together, the upgrades lend the already tough-looking Crosstrek a burly, end-of-days rally car vibe. And while the new parts aren't hugely expensive on their own, they add up to around $4,000, depending on the lights you choose. Along with the $550 suspension lift kit, you'll pay $300 for a special exhaust. Intake manifold spacers add the extra power, for a price of $270. The air oil separator costs $200, and the special rear bumper is another $550. All in all, the crossover rings in at $31,275.

The parts take inspiration from the Crosstrek Desert Racer that led Grabowski Brothers Racing to victory at the 2019 Baja 500. Unlike this more streetable Crosstrek, that desert-racing buggy boasts a turbocharged 2.5-liter Subaru engine pumping out 300 horsepower. While a substantial injection of power might be just what this Crosstrek needs, keep in mind Subaru might be taking care of that in the near future; also, this Crawford Performance creation would be just as amenable as an overlanding camper—just throw a pop-up tent on the roof and hit the trails to your favorite overlook. 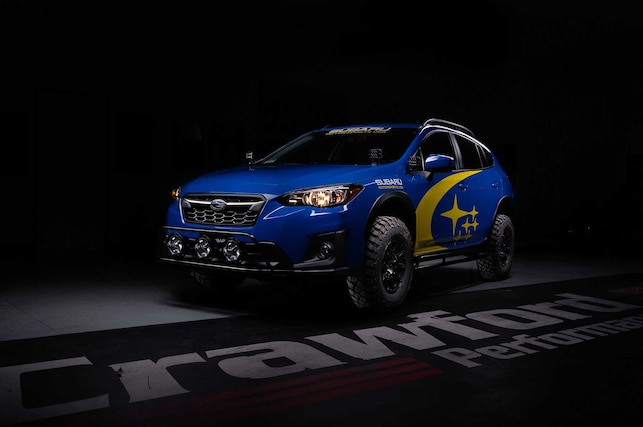 From the Editors of Super Street: It has been some time since we've heard of anything coming out of the Crawford Performance corner of the world. More than a decade ago, you may have been familiar with their time attack WRX STI (one was even driven by J driver Tarzan Yamada in a few US events), and even more of you probably saw Crawford built the STI used in Ken Block's first two wildly popular "Gymkhana" videos. Overlanding is really hot right now so we're not at all surprised to see the Subaru boxer shop moving into that emerging marketplace, plus this thing just looks bonkers cool.