A classic package full of tech, luxury, and style Reimagining vintage cars is all the rage these days. Artisans like Singer and Icon have made a name for themselves redesigning and overhauling classic cars and trucks into their own image, retaining the original soul of the car while adding in a healthy dose of their own aesthetic. Now, it looks like David Brown Automotive is tossing its hat in the ring with a new reimagined Mini Cooper.

It's called the Mini Remastered, and it's a pint-sized follow-up to David Brown's enigmatic Speedback GT. The build begins by taking a used Mini down to the bare sheetmetal, where the shell is de-seamed and smoothed out for a pure, sleek appearance. Despite the size, David Brown says the little coupe is chock-full of all manner of sound deadening to keep things calm on the inside.

The interior is a blend of modern retro-chic, outfitted with a bowlful of brushed and milled aluminum components and special handmade touches. It's high-tech as well, featuring a full infotainment suite with Apple CarPlay and Android Auto, push-button start, and remote locking. 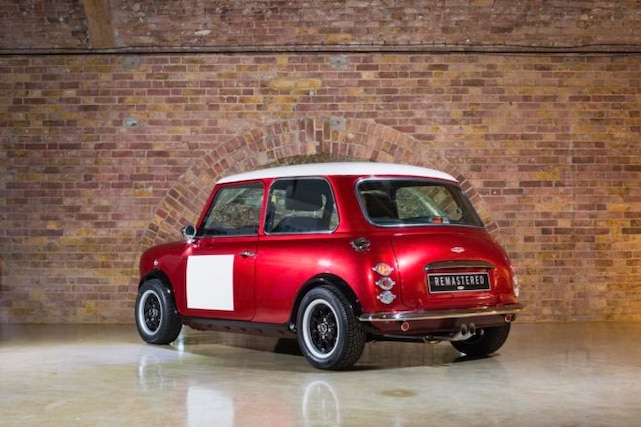 Despite all the extra niceties, the Mini Remastered should be a blast to drive. The original 1,275cc four-cylinder is redone inside and out, now producing 78 hp, sent to the front wheels through a sharp four-speed manual transmission.

Seeing as this is a hand-built car with a claimed 1,000 hours invested to each build, David Brown offers a huge range of customization for all tastes. There is a wide selection of wheels, leather, and fancifully named paint colors, including A Whiter Shade of Pale (off-white), Bad Moon Rising (light gray), and Starman (metallic blue).

Considering the hours invested and bespoke options, the Mini Remastered will set buyers back upwards of $90,000, and will be produced in very limited numbers.