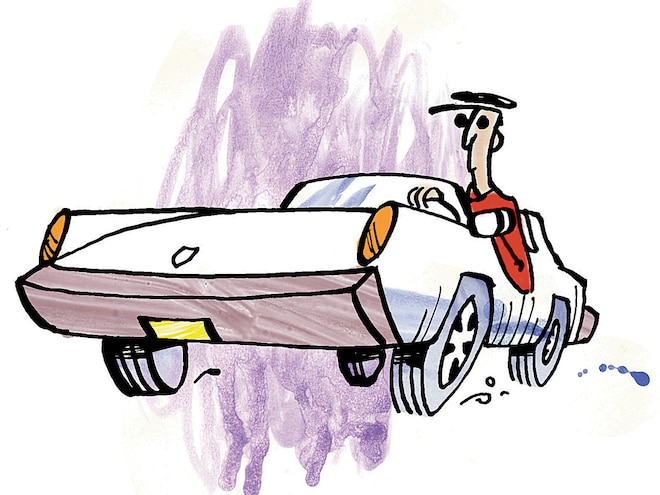 Mein Hanzy:
Yanking several hundred pounds from an already-lightweight 944 yields a car nearly perfect for mountain work, especially pointing downhill. The lack of soundproofing under the thin carpeting manages to transmit a cacophony of mechanical Mozart in spite of the fact that there's only two and a half skimpy liters of displacement to fill the choir. As I downshifted into a scenic overlook my eyes instantly locked onto the form of an early '70s 914, all 1.7 liters of it, so I twisted my steering wheel and came to a sliding halt beside this icon of the Very First Energy Crisis. 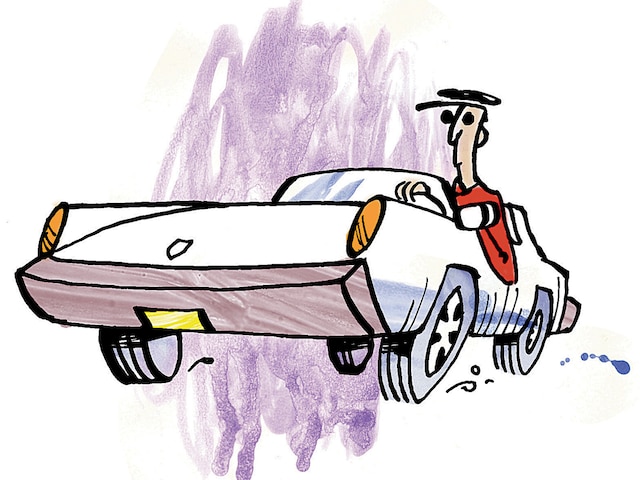 I threw open my door and rushed to the car. Its pearl white paint was flawless, perfect, looking as it had leaving the showroom more than 30 years ago, having never aged a day in the interim, and having never accumulated a single stone chip or even a bug from what I could see. I began to wonder exactly who would own such a car.

I was startled to see it was a tall man. "Yes, it is a lovely day," he said as he brushed past me and climbed into the 914, turning the key with a single and deliberate motion. The teeny-weeny pistons began their distinctive air-cooled bleating, and I could hear the whirring and spinning of various shafts and timing chains, as well as the frenetic tapping of Hershey Kiss-sized valves opening and closing as the diminutive four-cylinder engine finally found its idle and settled down to the business at hand.

I am quite sure that my awe was apparent when I asked, "Which way ya going?" The only response I received was a nod indicating downhill... my anemic little 944's only predatory hunting grounds.

"Maybe I'll follow you," I said as I quickly I turned to my car. "I was heading in that direction anyway," I slyly added while squeezing into my race seat and fumbling with the belts.

The tall man looked at me in a way I don't think I've ever been looked at before, and seemed to look right through me-or perhaps beyond me-and in a solicitous manner that was at once both paternalistic and vaguely pitying said curiously, "It's been known to happen."

I fired my mighty 2.5 liters of entry-level Porsche. If this were a Mustang or even a Vette I wouldn't have shown the least concern, yet the pristine 914 and its enigmatic pilot had both rattled and thrilled me. Nonetheless, I found first gear and blew out of that overlook like curry through a timid caucasian.

The 914 was cutting some very clean lines. She was slicing into the turns and picking off apexes with precision, turn after turn. I pushed the 944 to the limit, tires howling in protest and the rear end getting spooky, and I found myself lamenting the sticky race tires back in my garage. I was braking heavy and late, steaming into the turns with increasing abandon, and the brake pedal was getting mushy as it plunged closer to the floor on each successive application. Yet the 914 pulled steadily, inexorably, away from me. And as I pulled through my favorite sweeper at a public speed beyond all hope of absolution, I watched the 914 disappear and I knew that I would never catch it in a millennium of millenniums.

I pulled into the next overlook and shut down my car. We usually stand here and smugly watch a humbled five-liter drive by, thumping its way into Dino-Land while the clock ticks time during the Third (perhaps next-to-final) Energy Crisis. We usually stand here proud and contented, arms folded in an exaggerated stance of patience, waiting for our victim who eventually slinks by bearing the Big-Displacement, Big-Weight rumble of a soon-to-be-gone era, as destined for the tar pits as any design which has run its course, soon to be as extinct as the dodo and justly and rightly so.

From my vantage point I could see the 914 baking a corner way beyond where I stood, and I imagined that I heard it's tiny 1.7 liters of madness wailing from here, the tiny motor belting out a prescient tune 30 years before it could be heard with any clarity or necessity. Yet still I wonder: Who would drive such a car?