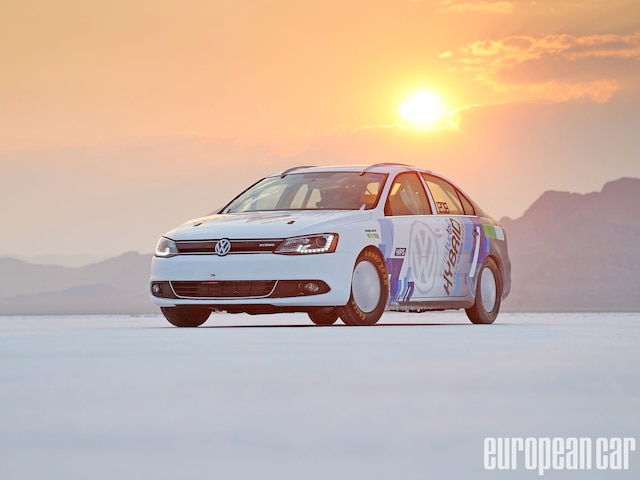 Most of us might loathe self-righteous Prius owners, yet secretly wish we could do more for the environment and reduce our gas bills. Well, VW has given us all a good reason to look at its forthcoming 2013 Jetta Turbo Hybrid model.

Powered by a 150hp 1.4L four-cylinder TSI turbo gasoline engine with seven-speed DSG transmission plus a 27hp electric motor, it promises to be a good drive and very economical, achieving a claimed 45mpg.

But just in case that wasn’t enough to inspire you to visit a dealership, VW also decided to take the Jetta Hybrid to the Bonneville Salt Flats.

With the powertrain modified by Volkswagen R&D in Germany, and SCTA regulations met by A-Salt Racing and Advanced Product Engineering, the car was driven by Motor Trend magazine writer Carlos Lago.

After a light lunch, the VW Jetta Hybrid set a Hybrid Speed Record at Bonneville by reaching 185.394mph, set during the Southern California Timing Association’s (SCTA) annual Speed Week. This represents the fastest speed ever achieved by a production hybrid at Bonneville.

“Achieving this speed at Bonneville shows the 2013 Jetta Hybrid is a distinctly different offering in the compact hybrid class,” said Jonathan Browning from VW Group of America. “As well as being expected to achieve combined fuel economy of 45mpg, the Jetta Turbo Hybrid also retains the fun-to-drive nature you expect from a Volkswagen in a segment dominated by less exciting vehicles.”