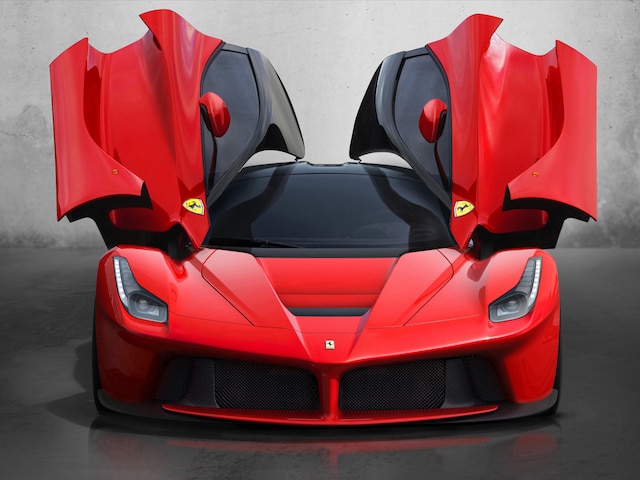 "We chose to call it LaFerrari," declared President, Luca di Montezemolo, "because it is the maximum expression of what defines our company in terms of technological innovation, performance, visionary styling and the sheer thrill of driving."

He went on to admit that the car is aimed at collectors and represents the future of the brand thanks to its advanced engineering and innovations, much of which was acquired in F1.

This is particularly apparent in the KERS-style hybrid system, which will be known as HY-KERS. While offering electric assistance, it won't allow the vehicle to drive in zero emissions electric mode because that "would not fit the mission of this model," according to the statement.

HY-KERS works in conjunction with active aerodynamics, allowing it to achieve absolute levels of performance, aerodynamic efficiency and handling without compromise.

The LaFerrari architectures 41/59% weight distribution front/rear in a compact wheelbase despite the addition of the hybrid system. The mass is situated between the two axles and low to reduce its center of gravity to guarantee dynamic handling and compact dimensions.

The layout of the cabin gives a driving position similar to a single-seater and was designed after consultation with Scuderia Ferrari drivers, Fernando Alonso and Felipe Massa.

The chassis uses four different types of carbon-fiber, all hand-laminated and autoclaved in the racing department using the same design and production methods as the Formula 1 car. This optimized the chassis to improve torsional rigidity and beam stiffness while cutting weight.

LaFerrari is the first Ferrari to be powered by a HY-KERS system. Yet it uses a 6262cc V12 that produces 789hp with 9250rpm maximum revs, which is a record for an engine of this size. It uses a high 13.5:1 compression ratio, helping to produce its high specific output of 126hp per liter.

The engine is mated to a 161hp electric motor, giving it a combined power output of 950hp.

The hybrid system employs two electric motors developed in collaboration with Magneti Marelli. One drives the wheels while the second runs the ancillary equipment. There's also a battery bolted to the floor that weighs 132 lb and was assembled in the Scuderia Ferrari KERS department.

The batteries are charged under braking and whenever the V12 produces more torque than is required, such as when cornering. Rather than the being sent to the wheels, the excess torque is converted to energy and stored in the batteries.

The electric motor is coupled with the F1 dual-clutch transmission to benefit weight distribution and increase efficiency since torque is instantly available to the wheels.

It uses active aerodynamic devices at the front (diffusers and guide vane on the underbody) and rear (diffusers and rear spoiler) to generate downforce when needed without compromising the overall drag coefficient.

The Brembo braking system is integrated into the hybrid system, with new lightweight calipers ensuring the correct cooling and a new formula for the carbon-ceramic (CCM) rotors. 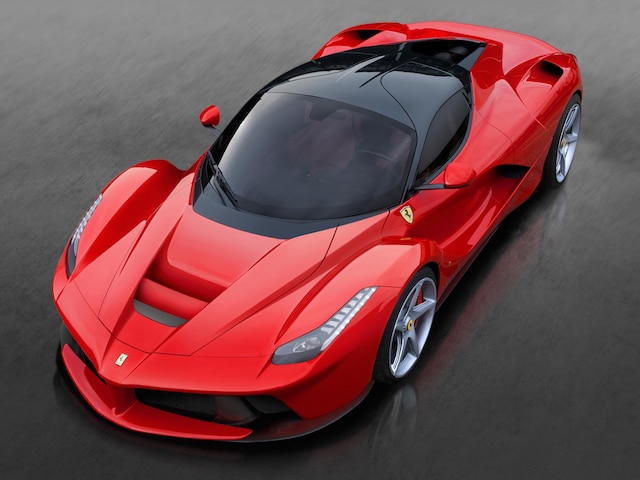 The Ferrari design team was led by Flavio Manzoni working with the engineers to emphasize the link between form and function. The result is an, innovative design, which is most evident in its profile where the car has a sharp, downward-sloping nose and a low hood which emphasizes its fenders.

The body was given a sculptural treatment influenced by its F1-inspired aerodynamics. 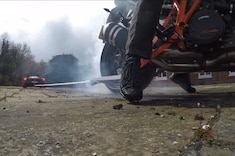 A new video has surfaced showing a tug-of-war between a Ferrari LaFerrari hybrid hypercar and a KTM 1290 Super Duke R sport bike. 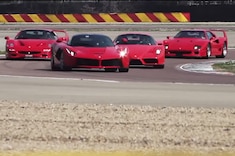 Check out Ferrari test driver, Dario Benuzzi take on the Fiorano circuit in a Ferrari F40, F50, Enzo, and a LaFerrari 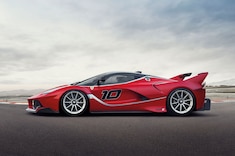