During its press conference today at the 2008 North American International Auto Show in Detroit, BMW announced the pricing for the highly anticipated 2008 M3 Coupe and M3 Sedan. When the vehicles go on sale in March, the Coupe will be priced at $57,275 and the Sedan at $54,575. Sharing the high-revving 414hp V8 and balanced chassis designed to be "faster than its engine," this March, BMW M GmbH will offer the most powerful, best performing series production M3s to the North American market. 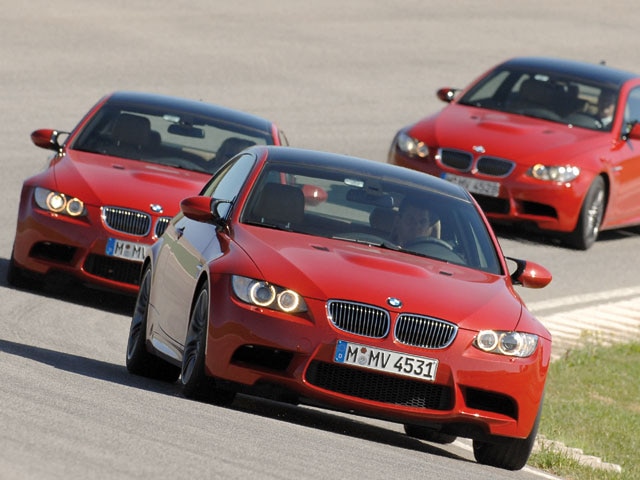 The all-new 2008 M3 Coupe and M3 Sedan-the fourth generation of compact sport vehicles which set the standard in minimizing any compromises between race-inspired performance and luxury and convenience-feature the first V8 in a series-production BMW M3. They also feature driver-adjustable settings for crucial dynamic controls encompassing engine response, steering, damping and stability (with an available steering-wheel-mounted "MDrive" button to store the preferences) and a sumptuous interior which can be optimized to the driver's desires including the comprehensive entertainment/navigation system operated through BMW's latest iDrive controller.

Additionally, the 2008 M3 Coupe is the first production vehicle in its segment with a carbon fiber reinforced roof. The material shares the same safety properties as steel, but is four times lighter. Weighing around 11 lb less than a standard steel roof and approximately 44 lbs. less than a steel roof incorporating a moonroof, the carbon fiber reinforced roof provides significant weight saving at the highest point of the car-lowering the car's center of gravity-to increase agility and responsiveness while limiting dive and roll in turns.

Racing provided the reason for the original M3's 1986 creation as the company had to produce road-going homologation versions of its 3 Series Coupe to enter the motorsports version in the German Touring Car Championship. The original M3's popularity provided the impetus to continue developing the M3, making it both a better performer and more inviting road car. The M3 has continued to evolve along with the underlying 3 Series, the company's most popular, upon which it is based.