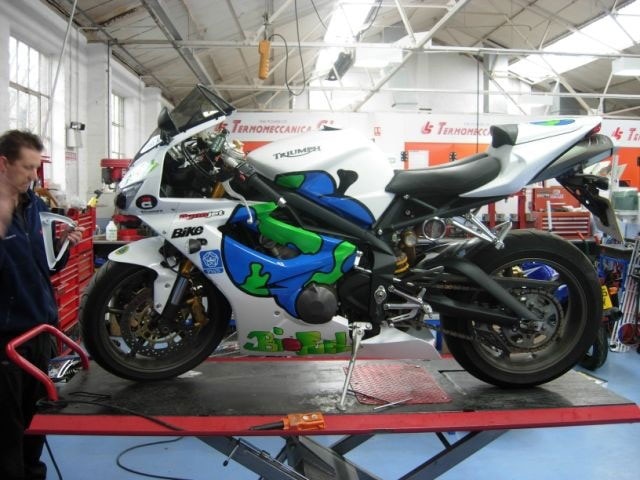 A Triumph Daytona 675 powered by apples reached an astonishing track speed of 158.7mph at Bruntingthorpe Proving Ground in Leicstershire, England! Students from a local high school produced the bio-ethanol fuel used for this groundbreaking initiative from apples.

Devised by Rupert Paul, from Bike magazine, "Project Fast Fruit" aimed to convert and run a high performance vehicle on biofuel using only basic equipment. As such, the fuel was produced in a Chemistry Lab as part of a school project by students from the Prince William School in Oundle, Northamptonshire.

Triumph Motorcycles initially entered the scheme four months ago by providing its world-leading Daytona 675 model as the test bike. Today's successful final run was the result of four months of hard work - the school fermented and distilled around 6000 crushed apples, while Bike magazine modified the Daytona's engine to run on bio-ethanol.

Surprisingly little modification was required - just a remap of the fuel injection system. The engine was then tested using commercially available E85 (85% ethanol) with encouraging results. The project then moved to the next phase, with testing and optimization of the engine using the fuel produced by the students before undertaking today's run at Bruntingthorpe.

Rupert Paul of Bike magazine commented, "We believe that achieving 158.7mph sets a record for a production bike on home-brewed fuel. Biofuel is a buzzword at the moment, with the UK Government setting a target for all gasoline and diesel to contain a minimum 5% biofuel by 2010. Although they are still questionable from an environmental point of view, biofuels are here to stay, and this experiment was about exploring how much power we could extract from them - as well as having some fun."

Andrea Friggi from Triumph Motorcycles commented, "At the moment, all Triumph motorcycles are designed for optimum performance with non-ethanol fuel but are compatible with E10 (10% ethanol). We're currently investigating making all models compatible with E25 fuel, so while this was a fun experiment it does have a serious side and we're looking forward to reviewing the results."