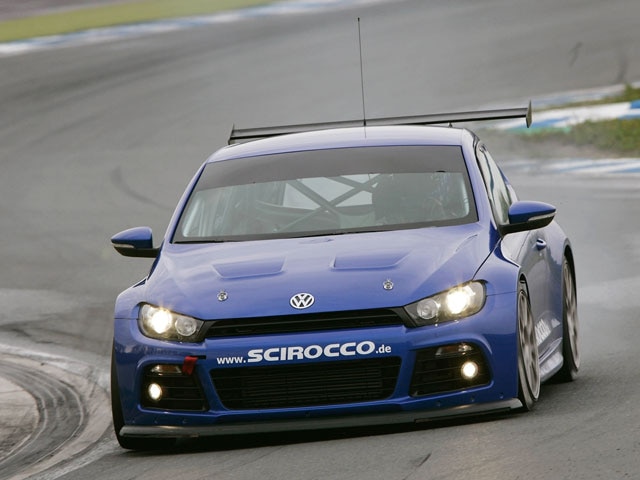 The new Volkswagen Scirocco will face the toughest track test in the world, even before it has gone on sale in Europe - an assault on the legendary Nurburgring 24 Hours. Three factory developed racing versions of the new coupe, each powered by a 2.0T engine developing 296hp, will be in action on Germany's daunting 15.5 miles `Nordschleife' in the May 24-25 event.

The Scirocco won't be making its way into the States and doesn't even go into production for Europe until this autumn, but it already has passed its first endurance test, at the Oschersleben motorsport arena. Among the car's many features is a direct-shift transmission system utilizing Volkswagen's DSG technology.

Double Le Mans winner Hans Stuck was at the wheel and is relishing his chance to race the Scirocco. "I felt immediately comfortable in the car," he said. "The Scirocco is one of the most uncomplicated racing cars I have ever driven. It's really fun, and I am looking forward to the 24 Hours on the Nordschleife with even greater anticipation."Other legends on the Scirocco team include double World Rally Champion Carlos Sainz and teammates Giniel de Villiers and Dieter Depping. The Volkswagen board member for technical development, Dr Ulrich Hackenberg, will drive also.

The Scirocco has a tough act to follow. Last year VW's GTI won its class and finished eighth overall at the Nurburgring.

"The racing version of the Scirocco was developed and prepared by our technical staff in record time," said Volkswagen Motorsport Director Kris Nissen, "and we are well on schedule now that we have successfully completed this first endurance test. The Nurburgring 24 Hours is the ideal platform to showcase the performance capabilities of this exciting coupe."

The Nurburgring 24 Hours has established itself as the world's toughest car race since its launch in 1970. A grid of 220 cars is allowed to take the start, with more than 700 drivers scheduled to compete in front of 200,000 spectators.