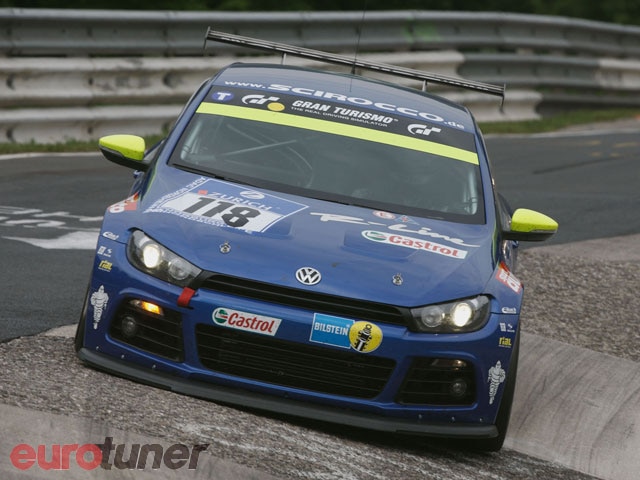 The Scirocco of Austrian track legend Hans-Joachim Stuck and his co-drivers Jimmy Johansson, Florian Gruber and Thomas Mutsch led the way on the daunting 25 km (15.5 mi)`Nordschleife' to claim top honors in its class. It finished 11th overall, four places ahead of the sister Scirocco piloted by double World Rally Champion Carlos Sainz and his Volkswagen rally team-mates Giniel de Villiers and Dieter Depping; Stuck also took his turn at the wheel of this car to achieve a unique feat in finishing in first and second place in class.

The track version of the Scirocco, which is not due to start its production life until the autumn, is powered by a 2.0 liter TFSI engine developing 320hp and features a direct-shift transmission system utilising Volkswagen's DSG technology.

A field of 219 cars took the start of the Nrburgring 24 Hours and more than 200,000 spectators watched the event trackside.

Also check out this German-produced commercial for the Scirocco GT24 on youtube.com showing the car's production and test runs - http://www.youtube.com/watch?v=COGD9iFPmpA