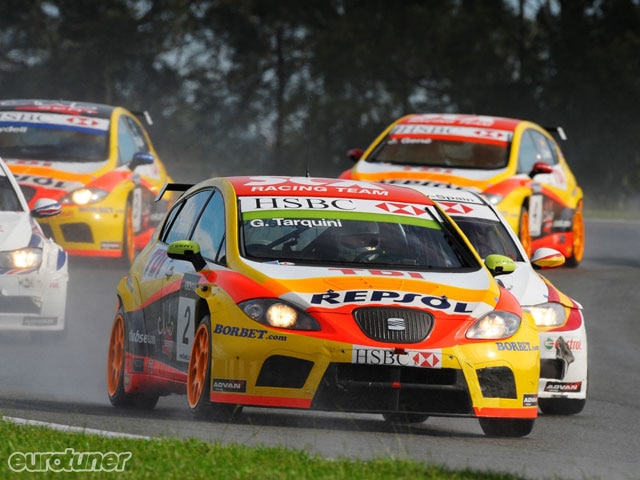 Spanish-based Seat Sport yesterday achieved an extraordinary result in both opening races of the 2009 World Touring Car Championship, with four Leon TDI racecars claiming the top four positions in Rounds One and Two of the WTCC, held in Brazil.

The result is a clear signal from the current FIA WTCC title-holder that it is prepared for the fight this year. Seat is the reigning WTCC champion, with two FIA World Touring Car Championship titles to its credit in 2008 - Seat Sport driver Yvan Muller clinched his first world title at the wheel of a Leon TDI WTCC, while Seat Sport also took the manufacturer title last season, recording 12 victories and 19 podium finishes in the process.

At the Curitiba circuit in Brazil, the Seat Sport team convincingly beat all its rivals both on a dry and wet track. This spectacular result, one of the best ever achieved by any make in the history of the WTCC, places Seat and its race-winning drivers Yvan Muller and Gabriele Tarquini at the top of the overall standings. Just one point behind are team mates Jordi Gen and Rickard Rydell, who also stepped up on the podium.

From the start of the first race, the four Seat Leon TDIs of Yvan Muller, Jordi Gen, Rickard Rydell and Gabriele Tarquini took the top four positions, with Tiago Monteiro in sixth, fighting with BMW and Chevrolet. An accident halfway through the race led to the deployment of the Safety Car but even this proved no hindrance to the four Leons, which maintained their dominance at the restart right through to the checkered flag.

With heavy rain flooding the track, the second race had to start behind the Safety Car but, once it cleared, Gabriele Tarquini and Rickard Rydell moved up quickly. A few laps later they were in the leading two positions. Some distance behind, team-mates Jordi Gen and Yvan Muller were also working their way through the pack, arriving just behind the leaders halfway through the race. The top four positions were maintained by Seat to the end of the race. 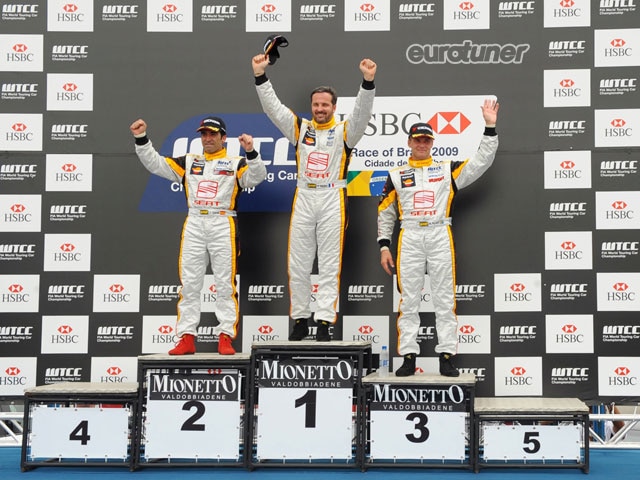 Tom Coronel finished a respectable eighth, scoring one point at the wheel of his Sunred Team Seat Leon WTCC, while Tiago Monteiro managed to move up to 12th after starting from the back due to a first-race penalty for overtaking before the restart.

Current FIA WTCC World Champion driver Yvan Muller was understandably pleased with Seat Sport's explosive start to the season: `It's been a very positive weekend, especially because we were much faster than expected. There are four Seat drivers leading the overall standings and that's good, but it's a long season.'

Team-mate Gabriele Tarquini was amazed by the result: `What happened is fantastic since placing four cars in the top positions of both races was inconceivable. It's an exceptional result. The rain possibly helped us in the second race, but our performance today has been very good'.

Jordi Gen spoke of the result's effect on team spirit: `I came to Brazil hoping to score six points and I'm leaving with 14 This is a superb result and both podiums mean I leave Curitiba in high spirits. I hope that the next races, such as Mexico where I won last year, will be favorable.'

The next WTCC race weekend is March 21/22 in Puebla (Mexico).