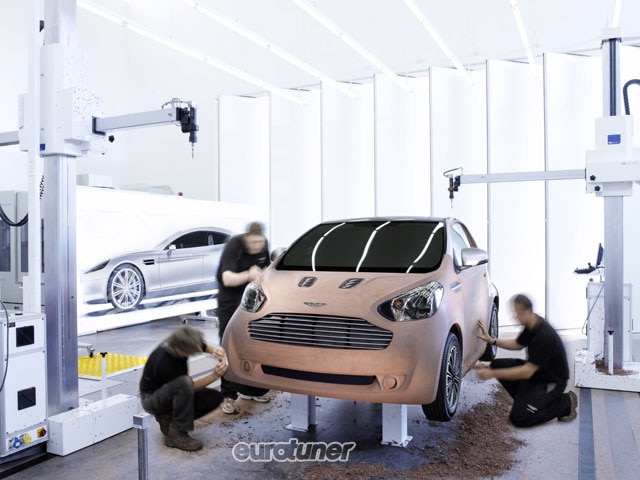 Aston Martin has developed a luxury commuter concept called the `Cygnet', which will offer customers a distinctive and exclusive solution for urban travel.

The concept will offer Aston Martin's trademark design in a commuter car package based on the critically acclaimed Toyota iQ, which has a Euro NCAP 5-star safety rating.

Aston Martin Chief Executive, Dr Ulrich Bez said: Now is the right time for Aston Martin to take this first bold step to embark on this special project - made possible with the support of an organization with Toyota's stature and capability, and the intelligent design and perfect city car package of the iQ.

Much work is still required, but I am confident this project could become reality in the not too distant future. This concept will allow us to apply Aston Martin design language, craftsmanship and brand values to a completely new segment of the market.

The Toyota iQ platform will be tailored specifically to customer requirements at Aston Martin's global headquarters in Gaydon, England.

It's a great compliment that the Toyota iQ was picked by one of the world's most prestigious sports car brands. This collaboration represents a natural pairing of strategies: a small yet spacious package, perfect for the city driver, finished with Aston Martin's iconic design language,' said Tadashi Arashima, CEO and President of Toyota Motors Europe. `The Cygnet is a good choice for the Aston Martin owner looking for that second or third car, which is luxurious and eco-conscious,' he added.

The Toyota iQ is considered a breakthrough in intelligent design. Less than three meters in length, its flexible package can accommodate up to four people, providing owners with a new dimension of versatility. Featuring a range of design innovations - such as its flat under-floor fuel tank and asymmetric dashboard - the iQ is positioned with CO2 emissions starting as low as 99g/km. It also offers outstanding levels of passive and active safety equipment, resulting in a Euro NCAP 5-star rating.

Despite tough market conditions for the automotive industry, the Toyota iQ has proved appealing to a wide variety of city drivers with a taste for style, driving performance and low CO2. The Toyota iQ made its European sales debut in January 2009. It continues to perform in line with expectation, with over 25000 units sold to-date.

The planned collaboration with Aston Martin is a timely endorsement of the iQ's packaging. The announcement marks a critical step in Toyota's longer-term planning to expand the `iQ world' - that is, to bring new versions of the Toyota iQ to market globally and expand the company's eco-friendly line-up.