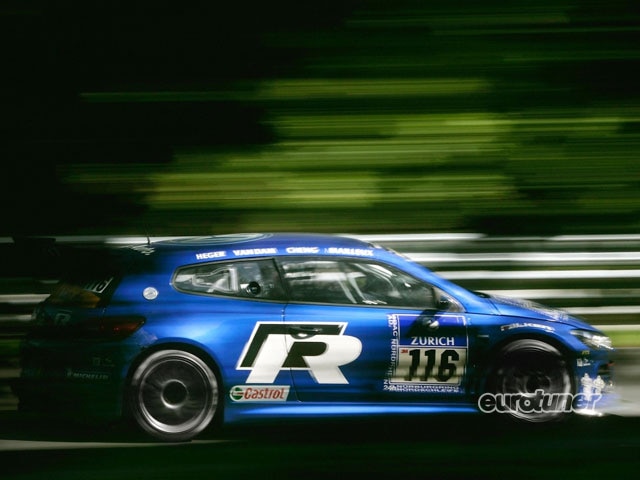 The Volkswagen Scirocco GT24 powered by natural gas and gasoline engines mastered the world's most difficult marathon, the 24-hour race on the Nurburgring and clinched two class victories. The fifth Scirocco of Carlos Sainz (E), Dieter Depping (D), Wolfgang Kaufmann (D) and Patrick Simon (D) retired after a strong showing but was caught up in an accident not of their own making.

The 235000 spectators lining the legendary Nordschleife in perfect weather witnessed a thrilling 24-hour race and the world debut of the new Scirocco R, the most powerful version yet of the Scirocco with a 265hp engine. The Scirocco R was presented to enthusiasts in a motorcade around the rollercoaster in the Eifel along with the Race Touareg with Dakar winners Giniel de Villiers (ZA) and Dirk von Zitzewitz (D).

Volkswagen Motorsport Director, Kris Nissen, commented: "We're extremely happy to have achieved the hat-trick in the two-liter turbo class, while also proving that the Scirocco GT24-CNG powered by natural gas is a viable alternative. Due to the changes to the regulations, the field has become clearly more competitive. What used to be lapping in the past has turned into an infinite number of overtaking maneuvers. At the end of the day, the strong performance of the entire squad enabled us to achieve the double class victory through careful preparation and perfect work during the race."