Bentley’s new 6¾ liter, twin-turbocharged V8 engine blends state-of-the-art technology with a classic configuration that’s propelled Bentley’s finest cars for over 50 years. Like the rest of the Mulsanne, every 505bhp V8 is hand-assembled and fully tested by Bentley’s technicians in Crewe, England.

At the heart of the Mulsanne is the company’s famous V8 engine, which is renowned for delivering the Bentley ‘wave of torque’. The V8 (the same configuration of which powered some of the company’s most iconic cars including the Arnage, Azure, Brooklands, the original Mulsanne, Turbo R and S2 Continental) has been completely re-engineered for the new Mulsanne.

The configuration will strike a chord with aficionados, the 6¾ liter displacement having been favored for many years. For the Mulsanne, however, the latest technologies have been employed, including two new control systems: cam phasing and variable displacement delivering even greater refinement as well as a 15% improvement in emissions and fuel consumption.

The pioneering application of these new technologies in combination allows the Mulsanne’s engine management to adjust the V8’s breathing for improved engine idle quality and torque delivery. However, by closing the valves of four of the eight cylinders, fuel economy is maximized when cruising.

All the major building blocks of the Mulsanne’s engine are new including the lightweight components such as pistons, connecting rods and forged crankshaft, which reduce reciprocating mass and internal friction for improved engine response. These changes are complemented by the introduction of a new eight-speed automatic transmission offering virtually imperceptible gearshifts.

In total, over 300 new or significantly re-engineered components have been created for the Mulsanne engine and the famed Bentley ‘wave of torque’ (752 lb-ft) is now delivered even earlier at 1750rpm.

This improvement in torque delivery from just above idle – as well as across the rev range – ensures that a tap of the throttle pedal will deliver phenomenal acceleration, with 0-60mph achievable in just 5.1 seconds. 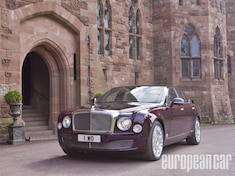 In honor of HM The Queen's Diamond Jubilee year, Bentley has unveiled the first example of its Mulsanne Diamond Jubilee Edition, one of 60 cars that represent each year of Her Majesty's reign. - European Car Magazine 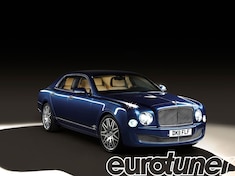 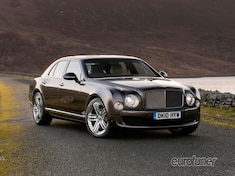 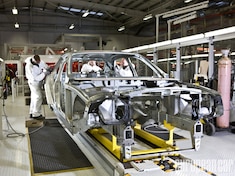 Bentley has given us a preview of what goes on behind the doors of the Crewe, England body assembly center. There they sculpt the beautiful curves and lines of the new Bentley Mulsanne. See the exclusive photos of Bentley's new flagship car here at European Car Magazine. 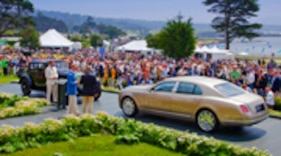