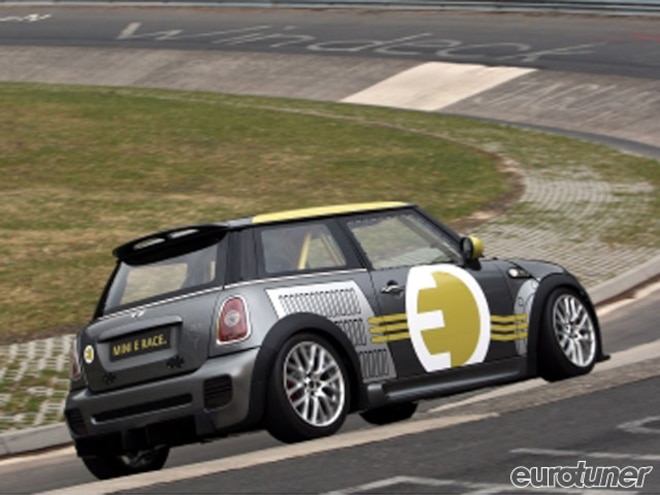 It's an indication of both the rapid development of battery technology, but also a sign of how far we have yet to go when we celebrate the completion of a high-speed lap of the Nurburgring-Nordschleife circuit at in an electric car. However, the BMW Group has just become the first manufacturer to make it happen when the Mini E Race, a modified version of the standard Mini E, completed a lap of the legendary 20.8km "Green Hell" in a time of 09:51.45 minutes. The Mini E Race hit a top speed of 116mph.

At the wheel of the electric racer was former DTM driver Thomas Jager. "I've driven this circuit many times, but never in such an extraordinary car," said Jager, who was the Mini Challenge champion in 2006. "The power of the electric motor has an incredible effect, as you can access maximum torque at all times. Another element is the lack of noise from the drivetrain - it was certainly the cleanest and quietest race lap I've ever driven."

Extensive preparations had to be completed before the car could attack the Nordschleife. The Mini E Race was fitted with lightweight body panels to reduce its considerable mass with the batteries onboard. It also received a rollcage for safety. Various other components, such as the suspension, brakes and tires, were also upgraded for the run.

Mechanically, it shares the same 204hp electric motor, supplied with energy from 5088 lithium-ion battery cells. The control electronics and the software were reprogrammed to achieve optimal performance for the Nordschleife. The power from the emission-free motor is channeled to the front wheels via a single-stage helical gearbox with a lengthened gear ratio.

You can watch the video of the Mini E Race lap at:
www.youtube.com/watch?v=5z3BKaGqurQ