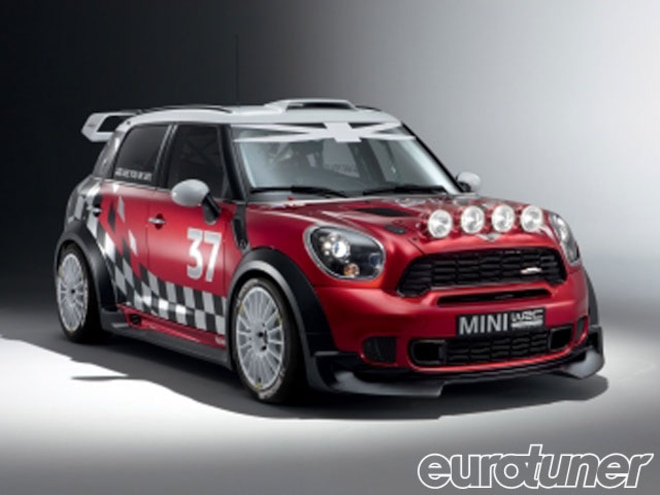 The new MINI WRC will contest the FIA World Rally Championship from 2011 was unveiled in Paris today. There was also an announcement that Kris Meeke (GB) has been confirmed as one of its drivers.

The MINI WRC, powered by a 1.6-liter, four-cylinder Di turbocharged engine, recently acquitted itself well during initial testing atProdrive's rally track. The company commenced development of the car in 2009, and a concept of the MINI WRC will be displayed in Paris.

"The Paris Show is the perfect stage to launch our MINI WRC," said Ian Robertson, member of the Board of Management of BMW AG, responsible for Sales and Marketing. "The response to our announcement that MINI will return to the world of rallying next year was very positive. The FIA World Rally Championship is the pinnacle of rallying, making it the ideal platform for demonstrating the competitive spirit of our brand. The development of the car is running on schedule, and the preparations for the world championship are in full swing. The MINI Countryman production model provided the ideal basis for our new world championship challenger."

The 2011 World Rally Championship will see the new MINI WRC contesting in six of 13 scheduled rounds, with MINI competing in the full 2012 season. In addition, Prodrive plans to make customer versions available to independent teams for use in the championship.

Rallying is hardly new for MINI. In the past this popular motorsport decisively shaped the image of the brand. The MINI Cooper S became a true legend through its numerous victories on Rally Monte Carlo. The European Rally Championship, too, saw MINI notch up serial successes. "MINI can look back on a successful tradition in rallying," says Dr Wolfgang Armbrecht, Senior Vice President Brand Management MINI. "The interest in motorsport among the present generation of MINI customers is massive. The WRC provides an excellent communications platform for the MINI Countryman, upon which the MINI WRC is based."

Prodrive, an experienced motorsport operation, was chosen as the partner in the quest to continue MINI's success story. The company, founded by David Richards, is viewed as one of the most respected and successful in rallying.

"This project is a truly passionate opportunity," believes Richards. "MINI is a cult brand which left a lasting impression during its previous motorsport campaigns. We are both extremely happy and proud to be on board as a partner when MINI returns to rallying. We aim to use 2011 as a preparatory year, amassing experience in order to ensure we are fully competitive from the start of the following season. But let's not underestimate the task ahead of us nor the stiff competition we will face on the way, however our target is firmly set on winning the World Championship title again with MINI."

Prodrive was founded in 1984, and has established itself as one of motorsport's leading independent teams. Currently employing over 500 staff, the company is based in Banbury (GB). Among other successes, Prodrive has to date won six World Rally Championships, five British Touring Car titles, and scored three class victories in France's classic Le Mans 24 Hours.

Kris Meeke has been confirmed as the first driver to compete for Prodrive in the MINI WRC. The rally ace from Dungannon (GB) first came to prominence when he won the British Junior Rally Championship in 2002. Numerous victories and titles were to follow. With support from his long-term mentor and former rally world champion, the late Colin McRae (GB), Meeke has been able to successfully establish himself on the rally scene. The Northern Irishman celebrated his most recent success last year, when he won the Intercontinental Rally Challenge (IRC).

The MINI Countryman is the newest MINI model and also the first to be equipped with an all-wheel-drive system. Therefore this model provided the logical basis for a competitive rally derivative. The flagship MINI Cooper S Countryman is powered by a 1,6-liter, four-cylinder petrol engine, supplemented not only by a twin-scroll turbocharger and direct fuel injection, but also fully variable valve management.

The heart of the MINI WRC is the BMW Motorsport-developed 1.6 liter, four-cylinder

Di turbocharged engine, which can be deployed not only in the WRC, but also in other championships running to the FIA's Super2000 regulations. The power transmission takes place via an Xtrac 6-speed, sequential gearbox. For its outings on the rally stages, the MINI Countryman chassis has been fitted with a rollcage developed by Prodrive, which exceeds the strict safety requirements of the International Automobile Federation (FIA).

HISTORY
The MINI carries motorsport in its genes. While Alec Issigonis, who created the classic MINI, concentrated primarily on the every-day suitability of the car, his friend and business partner John Cooper immediately sensed potential of a different kind when he first saw the sketches: In this novel small production car the successful racing car constructor recognized the basis for a promising sporty vehicle, and zealously set about converting the MINI.

Thus the foundation for an unequalled motorsport success story was laid, with the name John Cooper still being inextricably entwined with the sporting legend that is MINI. Victories in the Rally Monte Carlo are as much part of its history as are the successful production cars, which bear the Cooper badge. MINI scored its first success in the year of its birth: In 1959 Pat Moss (GB) won the Mini Miglia National Rally with a MINI 850. Spurred on by early successes in the Rally Monte Carlo in 1960, Cooper proposed a GT model based on the MINI.

Despite initial scepticism from Issigonis, but with the blessing of BMC chairman
George Harriman, the 1000cc MINI Cooper, which benefitted from comprehensive modifications to the engine to raise power from 21 to 55hp, went into limited production. The MINI Cooper was capable of approximately 130km/h after suitable transmission ratios were specified to match its sporty potential, while front wheel disc brakes ensured adequate retardation. The result of these endeavors inspired Issigonis, who, together with John Cooper, immediately set about the next stage of performance enhancement. For the MINI Cooper S, the engine was bored to the maximum possible, with the ensuing capacity of 1071cc enabling the car to contest motorsport's 1100cc class. The result was impressive: The engine delivered 70hp at 6200rpm, revving to a maximum of 7200rpm. This version, too, received upgraded brakes - servo assistance further improving braking power.

In 1962 the MINI Cooper S first caused a stir in Monte Carlo. With Rauno Aaltonen at the wheel, the small car embarked on a David versus Goliath crusade against more powerful opponents. However, just three kilometres from the end, Aaltonen, leading at the time, misjudged a corner and rolled out of the event. The following year, though, the Finn made up for this disappointment: Driving a MINI Cooper S he was placed third overall and won his class. It would get better: During the 1963/1964 winter rally season power was increased even further. Driving spectacularly, Paddy Hopkirk (IR) was placed first overall in the Rally Monte Carlo in the tiny sprinter. Thus the MINI acquired legendary status.

In 1965 Finland's Timo Makinen and co-driver Paul Easter (GB) repeated the Monte triumph. They were the only crew to complete thousands of kilometres without penalty - despite gruelling winter conditions. Only 35 cars - including three MINI Cooper S -made it to the finish out of a total field of 237entries. A hattrick was targeted for the following year. Drivers Timo Makinen, Rauno Aaltonen and Paddy Hopkirk sensationally achieved the feat by mounting the finish ramp in first, second and third respectively. However, bitter disappointment was to follow: The trio was disqualified after the rally's stewards decreed the MINI's headlight dipping mechanism did not conform to homologation requirements. For the general public this technicality, though, mattered little, with their enthusiasm for the three MINI drivers remaining undiminished. Hopkirk, Aaltonen and Makinen entered the annals of the Rally Monte Carlo as the "Three Musketeers".

The MINI's third Monte Carlo victory, achieved in 1967 by Aaltonen, was celebrated all the more enthusiastically after the events of the previous year. This time there were absolutely no doubts about the car's eligibility. In 1965 the "Rally Professor" Aaltonen had triumphed in the European Rally Championship, with Tony Ambrose (GB) and Makinen completing an excellent result for the MINI Cooper S by finishing second and third respectively. In addition, various MINI drivers celebrated numerous individual victories across Europe. However, the MINI did not shine only in rallying. In the 1960s the car achieved equal success on motor racing circuits. With its sporting qualities, it became one of the definitive racing cars of the decade, with many legendary drivers starting their careers with MINI.

In April 1968 Niki Lauda (AT) contested his first hillclimb near Linz (AT) in a classic MINI, finishing second. Just two weeks later he scored his first victory, displaying the sort of talent which would ultimately net him three Formula One titles. Like Lauda, other Formula One world champions such as Graham Hill, Jackie Stewart, John Surtees, Jochen Rindt and James Hunt all collected their first competition experiences in a classic MINI. 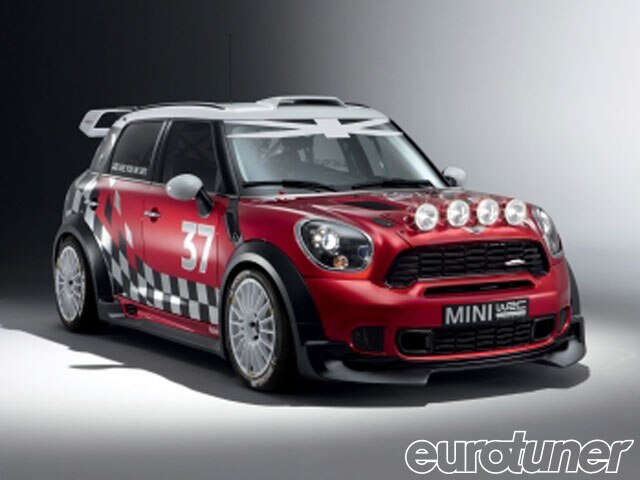 The MINI is also present on the contemporary motor racing scene. The MINI CHALLENGE, introduced in 2004, has established itself as one of the world's most popular club racing series, with the category currently being hotly contested in six countries - Germany, Spain, Australia, New Zealand, Argentine and Brazil. The series will continue in parallel with the World Rally Championship program.