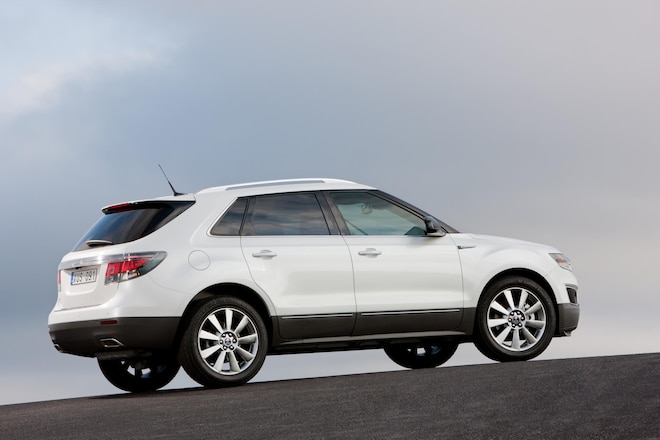 The new 9-4X brings Saab design and engineering values to the mid-size crossover segment. With distinctive Scandinavian looks, it offers car-like handling and ride characteristics thanks to a platform it shares with the Cadillac SRX.

The 9-4X goes on sale in North America in May next year, with sales in Europe and other global markets due to begin from August.

The 9-4X draws inspiration from the Aero X concept car, with a deep, three-port grille and 'ice-block'-effect lighting themes.

Disguised windshield and door pillars create Saab's signature wraparound-effect, where the single glasshouse graphic emphasizing the brand's traditional 'cockpit' look. Other exterior Saab identifiers include the shaping of the headlamps, a 'hockey stick' waistline and strong C-pillars complemented by a wraparound-effect rear screen.

The roofline is visually lowered and extended by a rear spoiler integrated in to the tailgate. At the rear, the lighting carries forward a signature introduced by the new 9-5 saloon. An 'ice-block' bar lit by LEDs extends across the lower tailgate and wraps around the light units. Twin rhomboid-shaped exhaust tailpipes are also neatly integrated into the lower bumper molding.

The cabin provides accommodation for up to five adults and is defined by a driver-focused cockpit layout. The center console, centre stack and main instrument display are presented within a single form that sweeps up around the driver and is finished with a carbon-effect trim.

Other subtle references to Saab's aviation heritage include a selectable, aircraft attitude-style speed read-out, green illumination for the needles of the three main dials and traditional Saab 'joystick' adjusters for the mesh-style air vents. The ignition - a start/stop button - is, of course, located between the front seats in true Saab tradition, adjacent to the shift lever.

Infotainment includes a 10-speaker Bose system with 5.1 surround sound and an eight-inch touchscreen, hard disk-based navigation system includes a bird's eye map view and 10GB storage for music files. Communication is supported by an integrated Bluetooth hands-free phone system, which functions via voice command and steering wheel controls, as well as via the infotainment panel.

In the rear, passengers can select their own onboard audio/visual entertainment through an optional dedicated unit in the back of the centre console. This has a video AUX input and two eight-inch screens in the rear face of the front seatbacks.

Advanced driving technologies include Saab XWD, the all-wheel-drive system, which infinitely varies torque between the front and rear axles. It is combined with an electronically-controlled rear limited-slip differential (eLSD) which can transfer up to 50% of rear torque between the rear wheels, diverting torque to the wheel with more grip.

Saab DriveSense offers an adaptive chassis function, which uses real time damping control to help the 9-4X react to how it is being driven and to changing road conditions. In addition to the default 'Intelligent' setting, the driver can select 'Comfort' and 'Sport' modes. An 'Eco' mode, activated via a separate button, also re-maps the throttle pedal and gear shifting patterns for optimal fuel economy.