Just six years after its launch, Renault 4 production exceeded the million mark, and other records were broken as the car reached a total production figure of 8,135,424 in the course of its 31-year career. 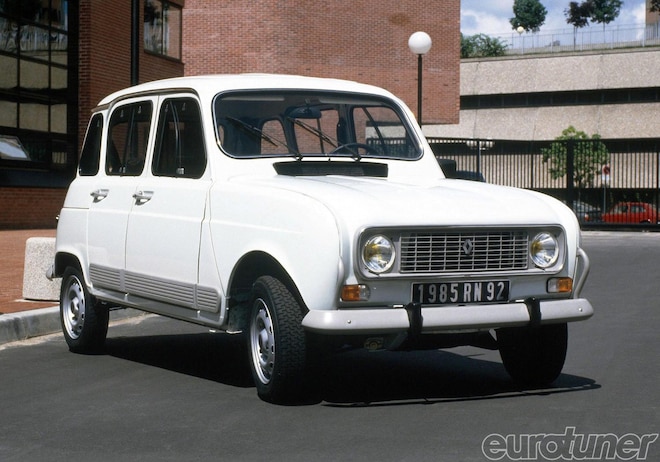 As the third best-selling model in automobile history, and the best-selling French car ever with sales in excess of eight million units in more than 100 countries, the Renault 4 has become a motoring icon.

In 2011, Renault will be celebrating its 50th anniversary, which provides the brand's Histoire & Collection department with a unique opportunity to stage and take part in a long list of major events. A car has been entered for January's historic Monte Carlo Rally, for example, and the model is due to star at February's Retromobile classic car show in Paris. It will also receive red carpet treatment at the third 4L International event, which will visit the Loire Valley chateaux in July.

La Renault 4 was the fruit of a concept. In 1956, Pierre Dreyfus, then president of the Regie Nationale des Usines Renault, launched the notion of a "blue jeans" car. He wanted to produce a versatile, inexpensive car with a worldwide calling that could match the changes in society that were being observed as the 1960s approached.

Following a five-year incubation period, the Renault 4, the make's first front-wheel drive passenger car, was unveiled to the Press before going on display at the 1961 Paris Motor Show. A van and three sedan versions were launched simultaneously: the R3, which was dropped from the catalog the following year, the R4 and the R4L (the "L" standing for luxury), soon became the household name for a model that lost no time in finding a place for itself in the French public's hearts.

Its unrivalled interior, low running costs and ability to adapt to all types of use made it an instant hit. Just six years after its launch, Renault 4 production exceeded the million mark, and other records were broken as the car reached a total production figure of 8,135,424 in the course of its 31-year career.

The Renault 4 was a global success and was produced or assembled in no fewer than 27 countries (in addition to France), some as far afield as Australia, South Africa, Chile and the Philippines. Indeed, six in ten sales were outside Renault's home market. 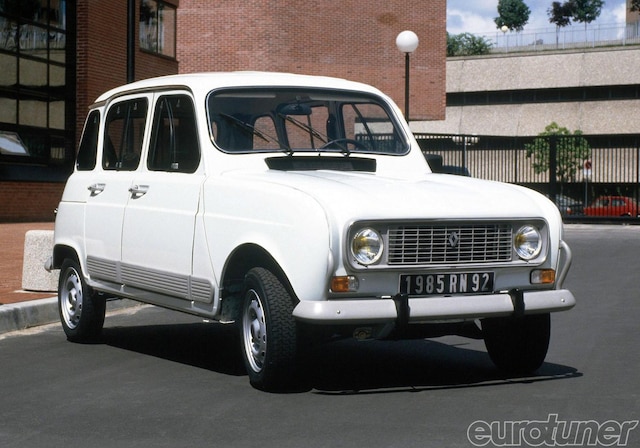 During its illustrious career, the Renault 4 was made in several different versions, including a van, a four-wheel drive vehicle and a cabriolet. Other variants, such as the Rodeo, and a long list of limited editions were also released, the best known of which in France were the Parisienne (1963), the Safari (1975), the Jogging (1981) and the Sixties (1985).

Meanwhile, the model benefited from its own off-road racing championship and was a favorite means of transport for young people itching to explore the world. It was also seen on such celebrated motorsport events as the Monte Carlo Rally and Paris-Dakar. It even finished the celebrated African rally-raid on the podium one year.

In 1992, a numbered special edition farewell version - "Bye-Bye" - was released to salute the incredible success of the model, which continued to be manufactured in small numbers in Slovenia and Morocco until 1994.

To celebrate the model's 50th anniversary, Renault plans to stage and take part in a long list of important events throughout 2011. The key dates on the calendar are:

The Modulo 4 Exhibition
This travelling exhibition will take in a number of different automotive events in 2011, from the Retromobile classic car show in Paris, to the World Series by Renault, the Autoworld Museum in Brussels and the French national motor museum in Mulhouse, etc. Put together by Renault's Histoire & Collection department, it stars 13 cars that epitomize the R4's history and qualities.

Three Renault 4s on the 2011 historic Monte Carlo Rally
As a tribute to the works Renault 4 entries for the 1962 and 1963 Monte, the Histoire & Collection department has prepared three Renault 4s for the forthcoming historic Monte Carlo Rally (27 January-2 February). These three cars have been entirely stripped and rebuilt like all top rally cars. They have been equipped to tackle the challenges of the 2500km route in the hands of drivers Jean Ragnotti, Manu Guigou and Michel Duvernay.

Retromobile classic car show (Paris)
The Renault 4's 50th anniversary celebrations will also allow Renault to make a splash at the Retromobile classic car show which takes place at the Porte de Versailles complex in Paris (207 February 2011). Visitors to the booth will be able to discover or rediscover the dozen or so Renault 4s that star in the travelling Modulo 4 exhibition. Renault 4 Miss Sixty will also be on show (see below).

4L International meeting
For the third year running, the 4L International meeting will enable fans from across Europe, and even further afield, to gather in Thenay, Loir-et-Cher, France, on July 15-17, 2011. Since its creation by 4L Magazine, this event has benefited from the backing of Renault's Histoire & Collection department, and the 50th anniversary festivities will naturally add a special flavor to this year's rally, which is expected to attract several thousand enthusiasts. A prize draw will be organized to give participants a chance to win the actual Renault 4 that Jean Ragnotti will drive on the 2011 historic Monte Carlo Rally.

It is based on a 1965 Renault 4L and features a specific body color and bespoke decals on the trunk, rear left fender and two of its wheels, as well as specific rear lights and an interior trimmed in grey denim with pink stitching and embroidered patterns.

Number of countries where the model was manufactured/assembled: 28 countries (including France).

Number of countries where the model was marketed: More than 100.

End of production: December 3, 1992, Renault announced the end of the Renault 4; only two factories would continue to produce the Renault 4 after that date and through 1994: Morocco and Slovenia.

The Renault 4 is the world's third best-selling vehicle after the Volkswagen Beetle and Ford Model T.

Names and nicknames of the Renault 4

In Italy, the JP4 was marketed under the name "Frog".

In Spain, it was nicknamed "Cuatro Latas" (four boxes).

In the former Yugoslavia, it was called "Katcra" (Catherine).

In Tunisia, it was referred to as the "R4 Monastir", after the hometown of President Bourguiba.

In Southern Rhodesia (Zimbabwe), it was nicknamed the Noddy Car.

In Argentina, it earned the nickname "El Correcaminos" (path runner).

In Finland, it became "Tiparellu" (droplet).

1959: Prototypes of the future Renault 4 crisscross the roads of the world. From the U.S.A. to Sweden, via Sardinia and Guinea, the test cars are put through their paces in extreme driving conditions.

1961 (July 6): The last 4CV rolls out of the Billancourt plant. All of its tooling is dismantled to make room for the assembly lines for the new Renault 4.

1961 (August): Presentation of the Renault 4 and the Renault 3 to the press in France's Camargue region.

1961 (October): The first public appearance of the new Renault 4 at the Paris Motor Show (Grand Palais).

1974 (September): introduction of the plastic grille.

1980: The Renault 4 claims third place on the Paris-Dakar Rally in the hands of the Marreau brothers.

1985: The threshold of seven million Renault 4 sales is exceeded.

1988: The Renault 4 bids farewell to the German market with the "Salu" limited edition (500 units) after 27 years of success and more than 900,000 cars imported. The van version is dropped from the French catalogue.

1992: The last 1,000 Renault 4 cars leave the Billancourt plant. The GTL Clan versions will have the distinction of featuring a commemorative plaque on the instrument panel, which reads "Bye-Bye".

On 3rd December, Renault announces the official end of the Renault 4's career. Only two countries would continue to produce the model after that date (until 1994): Morocco and Slovenia.