The new Rio has its own interpretation of Kia's signature grille, integrated with the headlamps to give a new twist on the Kia family look. With its aggressive new model assault, Kia Motors has revealed the first photos of the next generation Rio, that will be unveiled at the Geneva Auto Show in March alongside the all new Picanto.

The Rio is the latest car to be revealed by Kia, boasting a bold and distinctive personality, bringing the newcomer in line with the rest of Kia's striking design-led passenger car range.

The company's progressive designs, affordable price structure and clever marketing means this car will be a major player in global markets when it goes on sale later this year as a 5-door version, with a 3-door to follow in early 2012.

The new Rio has its own interpretation of Kia's signature grille, integrated with the headlamps to give a new twist on the Kia family look.

In profile, the body to glass ratio and its strong wedge form give new Rio a dynamic stance.

The new model features a wheelbase extended by 70mm (to 2570mm) and promises greater passenger space and comfort, together with increased cargo capacity for the hatchback. 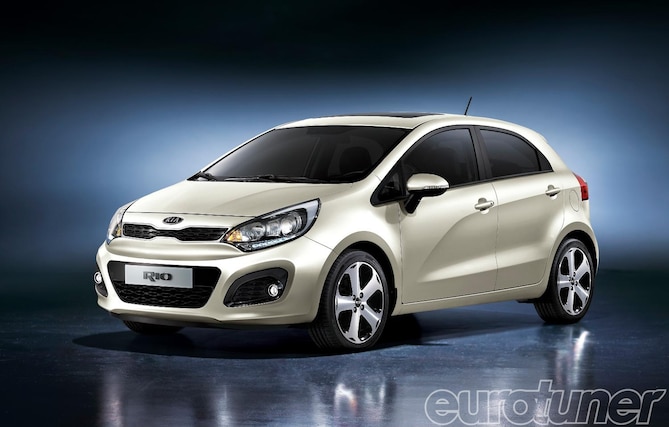 Inside, the new model will deliver a high level of quality together with a wide selection of trim options.

Kia's B-segment newcomer will be offered with an extensive range of fuel-efficient and low-CO2 petrol and diesel engines, depending on the market. This will include a 1.1-liter diesel generating 70hp, with CO2 emissions as low as 85g/km. An all-new, high-performance 1.2-liter Turbo Gasoline Direct Injection (GDI) will also be available from 2012.

Since its launch in 2005, global sales of the current-generation Rio have totaled more than 860,000 units. It was the company's third best-selling vehicle in overseas markets during 2010, with sales of more than 219,000 units.