It's a sporty crossover powered by an Energy dCi 160 twin-turbo engine to combine driving fun with low CO2 emissions. 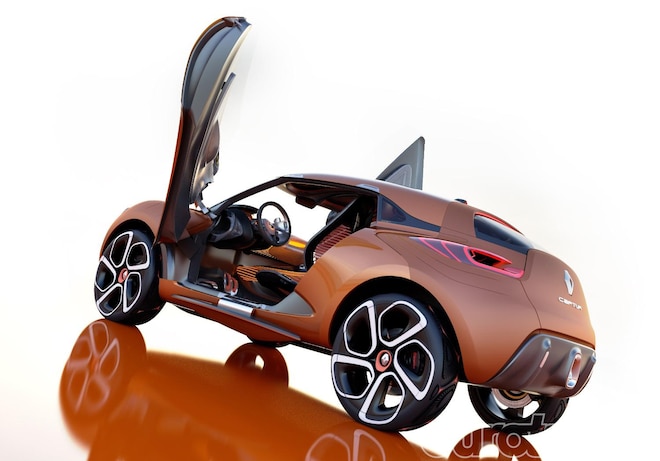 Revealed ahead of its world debut at the 2011 Geneva Auto Show, the Renault Captur is the second concept car to demonstrate Renault's new design strategy. 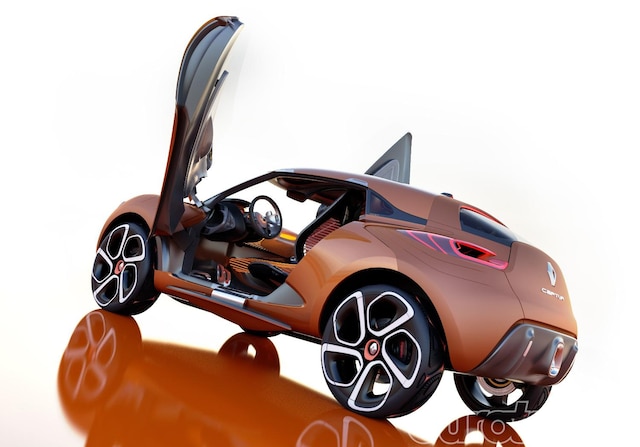 At the 2009 Frankfurt Auto Show, Renault revealed its new brand identity, which was founded on different stages of the human life cycle, with each phase taking the form of a specific concept car.

The first stage was 'falling in love', expressed by the two-seat DeZir concept. Now Captur addresses the second phase, of two people exploring the world.

In its proportions and curves, Captur is said to evoke movement and lightness, while displaying powerful and muscular all-terrain cues, according to Director of Design, Laurens Van den Acker.

For the exterior designer, Julio Lozano, the main inspiration was athletes and radical sports. "In designing Captur, I began with the image of a sprinter on the starting blocks, his muscles tensed, and the energy unleashed when the starting pistol is fired," he explained.

The design also references equipment such as helmets, gloves and other protective gear used in radical sports, combining high technology with sophistication and lightness.

Captur adopts the new frontal identity first presented by DeZir. The identity has as its centerpiece a large Renault logo, set against a dark surface to stand out clearly. Substantial, matt-finished fenders reinforce the design's visual strength. LEDs relay the indicator signal in a wave-effect running the length of the vehicle.

Captur also has a practical and versatile side. It is fitted with a hard convertible top which, once removed, reveals a carbon fiber framework. It can thus transform from a coupe to a convertible, from an urban vehicle to an off-roader. Its sporty appeal is reinforced by butterfly doors and big 22-inch black and white wheels.

With its bodywork finished in a spicy shade of orange, Captur takes its cue from the red championed by DeZir. The color appears in a variety of shades on materials inside and outside the vehicle.

The orange theme was carried into the cabin, which also features fluorescent highlights picked out by light. "My main source of inspiration were the human body, outdoor sports and urban styling," explained the color and trim designer, Kana Watanabe.

The interior is designed to be both welcoming and occupant-friendly. The impression of lightness is expressed by the front seats attached to the center console as if suspended in mid-air.

The center console, door casings and dashboard are formed using a translucent material like a second skin. At the front of the cabin, this includes a glimpse of the high-tech fiber ropes, luminescent in places, which have been used for most of the passenger compartment. "The interior is designed around this network of stretched elastic ropes, which bring to mind sailing or mountain climbing. They use graphics and light to bring rhythm to the overall design and reinforce the dynamic feel of the vehicle," explained interior designer, Magali Gouraud-Borgers.

The aluminum pedals, carbon bucket-style front seats and steering wheel trimmed in textured grey leather reassert the sporting side of the design.

The rear of the car is a multi-purpose area, with the deck lined with three layers of rope. The stretched cords allow items to be secured, thus providing a reconfigurable storage area. The supple elasticity of the structure is an entirely new type of comfort, akin to a hammock.

Finally, it is possible to pull seatbacks from the side of the car to provide two full-sized rear seats, complete with seatbelts and head restraints. This enables Captur to accommodate four passengers.

Captur makes use of the Energy dCi 160 twin-turbo engine concept, developed from the current Energy dCi 130i. The 1.6L produces 160hp. Peak torque (280 lb-ft) is available from as low as 1750rpm, giving powerful acceleration from low revs. Paired with a dual-clutch EDC transmission, this driveline promises CO2 emissions of less than 99g/km.

Captur's performance is further enhanced by RX2, a system that improves traction at low speeds. Should one of the two driven wheels lose traction, this entirely new mechanical self-locking differential transfers all or part of the engine's torque to the wheel with the most grip.

Captur also marks the debut of the Visio-System, an innovation that uses a forward-facing camera mounted at the top of the windscreen to provide driver-assistance functions. This new technology is able to embed synthesized images into real-time images of the road ahead. Displayed on a central screen, the augmented reality is aimed at enhancing the driver's perception of the world by superimposing purpose-designed elements.