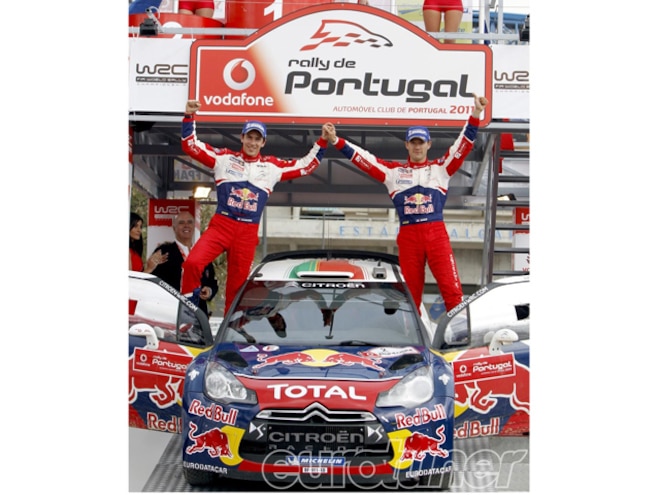 A year after scoring their first victory in the FIA World Rally Championship in Portugal, Sebastien Ogier and Julien Ingrassia made it two wins in two attempts at the Algarve event.

After driving the perfect race, the Citroen Total World Rally Team's DS3 WRC cars scored the first one-two of their fledgling career, with second-placed Sebastien Loeb and Daniel Elena now level with Mikko Hirvonen for the lead in the drivers' world title chase.

The Citroen Total World Rally Team started the third and final day of Rally Portugal with a lead of more than four minutes over its rivals, and controlled the end of the race.

Beyond consolidating the expected double of the Citroen DS3 WRCs, the aim of the last day was to score a few additional points in the final power stage. Petter Solberg's Citroen led for a long time, but it was Sebastien Loeb who set the fastest time. Second-placed Jari-Matti Latvala's Ford and Sebastien Ogier in third were unable to knock seven-time World Champion, Loeb, off his perch.

When the Citroen Total World Rally returned to the Estadio Algarve, they celebrated a clean sweep and Ogier's third victory in the world championship.

Ogier was congratulated by the whole team and shared his joy: "It's been a perfect weekend. We controlled our first day well and then pushed at the right moment. It's a telling result for the whole team, with the double and the points in the Power Stage. After six months without a win, I was starting to get a bit edgy. I hope it's the start of a good series. The points we've bagged today will help us re-launch our championship challenge after our disappointment in Rally Mexico."

Sebastien Loeb finished second and scored 20 points this weekend, thanks to his bonus in the last stage. This means he now sits on equal points in the Drivers' World Championship with Ford's Mikko Hirvonen: "Our hopes for victory were dashed yesterday when we lost 30 seconds in the dust thrown up by Mikko's car," Seb reported. "Second was the best we could hope for. I knew it wouldn't be easy to score the three bonus points in the Power Stage - but we did! It's a positive result for us and for the whole team. These points will be very precious because the championship looks like being a very closely-fought one."

Meanwhile, the Ford Abu Dhabi World Rally Team retained the lead of both the manufacturers' and drivers' standings in Portugal. Jari-Matti Latvala and Miikka Anttila's third place in Rally de Portugal, and fourth for team-mates Mikko Hirvonen and Jarmo Lehtinen, both in Ford Fiesta RS World Rally Cars, preserved the team's lead in the manufacturers' table.

Hirvonen maintained his lead in the drivers' points after this third round of the 13-rally series. Latvala remains third in the standings after his third consecutive podium finish. He boosted his score by claiming bonus points for finishing second in this afternoon's Power Stage.

After visiting the capital city of Lisbon on Thursday for the opening special stage, competitors tackled three days of rocky and abrasive gravel roads in the hills above the Algarve coastline in the south. The 17 tests covered 240 miles, with sunshine on Friday giving way to overcast skies yesterday and spells of heavy rain on sunday.

Latvala and Hirvonen ended the opening leg in first and second respectively, 25 year-old Latvala claiming a clean sweep of stage wins on Friday afternoon. A broken front right driveshaft and a puncture on Saturday forced Latvala down to third, while team-mate Hirvonen slipped to fifth after a puncture and broken rear suspension.

Hirvonen climbed to fourth on Sunday morning's opening stage, the first of four tests covering 104.86km, but slid back to fifth after a driveshaft broke on the next test. He regained fourth on the penultimate stage and, with no realistic chance of climbing further, both drivers focused their efforts on the opportunity to take bonus points in the Power Stage.

The 31.04km test was the longest and most difficult of the rally. Hirvonen's hopes of bonus points were dashed when a rear left shock absorber broke near the end. But Latvala was quick throughout and his second fastest time earned the Finn two extra points.

"On the first pass through the stage this morning I improved my pace notes for the Power Stage, especially in the narrow and slippery corners that were made more tricky by the rain," said Latvala. "It was a tough stage and I paid close attention to my notes to ensure they were as good as they could be. I attacked really hard. I drove over a big rock and was sure the impact would puncture the tire, but the rubber was strong and I escaped. I'm really happy with the extra points.

"It's my third podium in three rallies so far this year and I'm pleased with that consistency. After my problems yesterday, a podium is a fantastic result. I feel confident in the car and know we can continue to work with its development to improve it even further," he added.

Hirvonen, too, was satisfied with fourth after his earlier troubles. "This was the best result I could hope for after losing time yesterday and this morning. I wanted to take extra points in the Power Stage but it wasn't to be. I'm leaving Portugal still in the lead of the championship. It's close and exciting, and I'm sure it will remain that way for the rest of the season.

Khalid Al Qassimi and Michael Orr finished 14th in the squad's third Fiesta RS WRC, scoring points for Team Abu Dhabi. They returned to action Sunday after crashing out yesterday, and Orr completed the final day with two broken ribs from the impact.

Next round
Round four takes the teams to Rally Jordan (14-16 April). The gravel event is located on the shores of the Dead Sea, with most of the stages taking place below sea level.