On Saturday morning, in front of a noisy, passionate Sebring crowd, the two Peugeot 908s dominated proceedings at the start of the race. 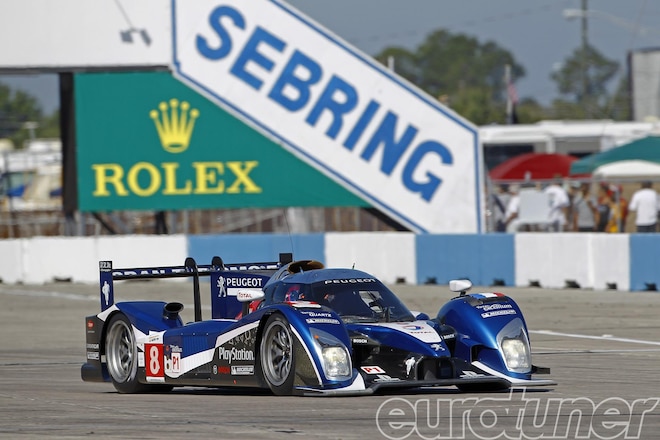 The 2011 12 Hours of Sebring race could not have started better for Team Peugeot Total. A faultless qualifying lap saw Stephane Sarrazin record the new Peugeot 908's first pole position, in the car's very first race. The team's second car secured a second row starting position to place both cars in an ideal position for the start of the race. Stephane Sarrazin, No.8 Peugeot 908: "I waited for four minutes before heading onto the track to avoid the traffic. That turned out to be the right decision, and it was wrapped up after one lap!"

On Saturday morning, in front of a noisy, passionate Sebring crowd, the two Peugeot 908s dominated proceedings at the start of the race.

Franck Montagny was given the role to start the race in the pole-sitting No.8 car and he made the most of his pole position to head into the first turn in front.

Marc Gene also wasted no time taking his No.7 car from third on the grid into second place. The two new Peugeot 908s were the quickest cars on the track, but a series of safety car periods prevented them from building any real lead.

Lap after lap the new 908s continued to run together at the front of the field. Then, on lap 115, the No.7 car's chances of victory evaporated when it was involved in a collision with the Audi R15+ being driven by Dindo Capello. The car was badly damaged and was forced to come in to the pits to change the front left stub-axle and clutch, losing the team of Marc Gene, Anthony Davidson and Alexander Wurz around 20 laps in the process.

"I was level with Dindo Capello", commented Marc Gene. "I braked fairly late and we ended up turning into the corner at the same time and coming together. It was a real shame because our car was performing very well".

It was then left to the No.8 Peugeot 908, driven by Franck Montagny, Stephane Sarrazin and Pedro Lamy, Team Oreca's Peugeot 908 HDi FAP (Lapierre-Duval-Panis) and the Honda ARX no.01 (Pagenaud-Brabham-Franchitti) to battle it out to win the race. Time and again, the three cars raced on the same lap. The standings changing each time the cars came into the pits or during safety car periods.

After more than nine hours of racing the No.8 Peugeot pitted for fuel and tires. During what should have been a routine stop, a damaged radiator shutter required the nose section of the car to also be replaced, losing precious seconds. Franck Montagny, the last driver to take the wheel of the brand new Peugeot 908 pushed as hard as he could to try to make up the lost time and crossed the line in third place, on the same lap as the winner, Team Oreca's Peugeot 908 HDi FAP.

"I pushed very hard at the end to try and steal second place. We ended up just six seconds adrift of second spot", commented Franck after the race. "The car withstood the conditions and ran well for 12 hours. Although we missed out on the win today, that was largely down to racing incidents."

"More than the actual result, we're really pleased to have both cars complete the race", commented Olivier Quesnel, Peugeot Sport Director. "We didn't have any technical problems, which is extremely satisfying for this new car's first race. Our driver teams performed well, the cars were reliable and the entire Team Peugeot Total reacted perfectly when faced with the various situations that arose during the 12 hours of racing. We came here to prepare for Le Mans, and we have done just that. We have also picked up a lot of points for the ILMC and head the constructors' standings. Our heartfelt congratulations go to Team Oreca on their win with the Peugeot 908 HDi FAP. They produced a faultless performance and proved once again the efficiency and reliability of this car. It's a Peugeot that has won again today."

Preparations for the 24 Hours of Le Mans in June are set to continue on 24th April, with the Le Mans test day, when the Peugeot 908 will experience the 13km track for the first time.

AUDI
Meanwhile, Sebring was the last race for the Audi R15+ TDI. Unfortunately, both the Audi Sport Team Joest cars cars were delayed by incidents in the first half of the 12-hour race.

The hopes of Timo Bernhard, Romain Dumas and Mike Rockenfeller were destroyed after one hour of racing, when Rockenfeller had to pit twice in a row with a rear left puncture.

Both times there was bodywork and rear wing damage. The repairs cost a total of eight laps and dropped the reigning Le Mans winners down to 50th position.

Dindo Capello, Tom Kristensen and Allan McNish were able to take the lead several times with the "sister" car. At the beginning of the fifth hour, however, Capello became "the victim of an attack by Peugeot driver Marc Gene" while running in second position. Gene apparently hit Capello hard on the right rear wheel. As a result of the collision, the right rear suspension of the Audi R15 TDI had to be replaced.

The Italian rejoined the race in 17th position, seven laps down.

In the remaining hours, the two Audi teams were able to move up into fourth and fifth positions respectively with consistently good lap times. However, Audi Sport Team Joest was denied the hoped-for victory in the "farewell" race for the Audi R15 TDI despite both cars having the performance to achieve it.

In March 2009, the Audi R15 TDI won the Sebring 12 Hours on its race debut. The greatest triumph came last year with a 1-2-3 victory and a new distance record in the Le Mans 24 Hours.

After its "farewell" appearance at Sebring, the record-winning car of the Le Mans 24 Hours will now finally be moved to the museum. Audi Sport Team Joest will now focus on the new closed Audi R18 with its race debut scheduled for the second round of the Intercontinental Le Mans Cup on May 7 at Spa-Francorchamps (Belgium).

NISSAN
Nissan enjoyed success on its debut in the Intercontinental Le Mans Cup (ILMC) series when the No.26 Signatech Nissan LMP2 car clinched a second-place class finish at the end of the grueling 12 Hours of Sebring. The result marks a solid start to Nissan's new challenge in sportscar racing and another step along the way for the first ever virtual-to-real racer, Lucas Ordonez.

As Nissan set out on this new adventure it was important for everyone concerned that they put in the best performance they could as a mark of respect to their colleagues and friends in Japan. Messages of support were displayed on the car and on the drivers' helmets, and the Japanese people were never far from the team's thoughts.

Lucas Ordonez was wide-eyed at the prospect of his first big race and all eyes were on the PlayStation gamer-turned-racer to see how he would cope with the tough Sebring track. Happily, he didn't disappoint.

The task of qualifying the car in Friday's session came down to French veteran, Soheil Ayari, who left the competition standing with a historic LMP2 class pole position. This was the first pole position for a Nissan-powered car at Sebring since 1994, and it put the Nissan name firmly back in the record books.

The race itself was always going to be tough, with the rough Sebring course being renowned as a 'car breaker', 58 cars on the circuit at the same time, and the air temperature standing at over 30°C throughout the day. For Lucas, this was no longer a video game.

Franck Mailleux took the start of the race and quickly established a good lead in the LMP2 class. Then it was Lucas' turn and he did a great job, keeping hold of the lead throughout his long stint. Unfortunately, on lap 78, during Soheil's first turn at the wheel, electrical gremlins in the transmission forced the car into the pits for an extended period to allow the team to fix the problem. Then the fight back began.

All three Signatech Nissan drivers got their heads down and slowly but surely clawed back the lost time to once again lead the race in the LMP2 class.

Unfortunately though, after nine and a half hours of racing, the gremlins returned. This delay allowed the first of the Lola Honda cars to retake first position - a lead it never relinquished, despite the best efforts of the Nissan drivers.

Lucas Ordonez was delighted with his and the team's performance at Sebring: "A few short months ago I could never have imagined I'd be racing at Sebring in the ILMC. Today was the culmination of intense preparation since the deal between Signature and Nissan was signed - all the drivers, technical staff and management have been working incredibly hard. I spent a lot of time driving the circuit virtually before I got here and that really helped my preparation.

"Personally, I feel I made some small mistakes out there today, but I'm learning all the time and certainly can take away a lot of lessons from this race. One thing I need to work on, for example, is carrying as much speed into the corners as possible. You don't get to feel the same huge downforce on a PlayStation video game... yet! We have to remember that this was our first-ever competitive race. We now have a few weeks before the race in Spa, and we'll be working round the clock to at least match this great result next time."