The 1000km race at Spa is seen as an indication of performance for Le Mans, and Peugeot’s one-two victory has sent a very strong message to Audi. 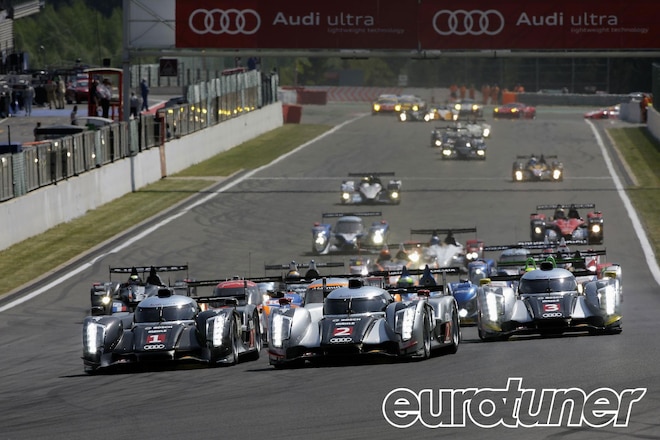 Just a few weeks ahead of the 24 Hours of Le Mans, Peugeot recorded an encouraging one-two voctory at Spa-Francorchamps, after an enthralling six-hour race. Alexander Wurz, Anthony Davidson and Marc Gené clinched the win in the No.7 car ahead of car No.8’s Franck Montagny, Stéphane Sarrazin and Nicolas Minassian, who had started in 48th position on the grid. Team Peugeot Total thus took another giant step forward in its preparation for Le Mans. 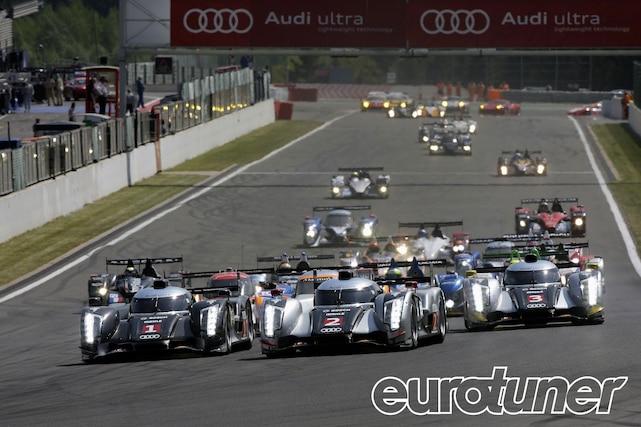 Thanks to its second one-two in ILMC, Peugeot has extended its lead in the Constructors’ standings. Team Peugeot Total has also moved to the top of the teams’ standings. Fourth on the starting grid, Team Oreca-Matmut’s Peugeot 908 HDi FAP finished 10th with its driver team of Duval-Lapierre-Panis.

With 34,600 spectators watching Saturday’s race at Spa-Francorchamps, the Peugeot 908s lined up well down the starting grid, but as soon as the race got underway, all three Team Peugeot cars showed they were not content to sit back. From 12th place, Alexander Wurz, in the Peugeot No.7, moved up to 3rd at the end of the first lap! Meanwhile, Sébastien Bourdais moved up to 4th spot in car No.9 and Franck Montagny, who started in 48th position, overtook an incredible 38 cars in one lap!

Alexander Wurz was flying as he grabbed second spot 30-minutes into the race. The Austrian then closed up on the tail of race leader Lotterer in his Audi R18. He managed to pass the Audi just before the first refueling pitstop after a superb overtaking maneuver in traffic.

Things were going well for his teammates, with Sébastien Bourdais (who handed over the No.9 Peugeot 908 to Pedro Lamy) getting the car to 4th position. Meanwhile, Franck Montagny was lapping in 5th place as he handed over to Stéphane Sarrazin.

The race gradually took shape and the consistency of the Peugeots enabled the three 908s to hold the top three positions after 2.5 hours of racing, showing their competitiveness. Anthony Davidson, Pedro Lamy and Stéphane Sarrazin maintained an unrelentingly high tempo, thus widening the gap to their rivals.

The Peugeot 908 No.7 held onto first place until the next round of refueling pit stops. Marc Gené, and then Alexander Wurz kept pushing to the end of the six hours of racing, without experiencing any issues.

Pedro Lamy was the only driver to complete three stints but the Portuguese driver made a costly error at the end of his stint, causing the Peugeot No.8 to drop to second. Simon Pagenaud took over from Lamy but had to come into the pits 30 minutes before the end to change the front right stub-axle. The driver team of Bourdais-Lamy-Pagenaud finished eighth, but also claimed the fastest lap.

After six hours of intensive racing, Team Peugeot Total secured an important one-two in perfect preparation for this year’s 24 Hours of Le Mans. So, for the fifth year running, a Peugeot wins the 1000km of Spa-Francorchamps. Alexander Wurz, Anthony Davidson and Marc Gené will go down in the record books as the first drivers to win a race in the new Peugeot 908. “What perfect timing for this, our fifth consecutive win at Spa, the first victory of the Peugeot 908 and our first win of the season in ILMC”, commented Olivier Quesnel, Director of Peugeot Sport.

For Audi, the Joest team experienced a rollercoaster ride of emotions on the new Audi R18 TDI’s race debut. After a perfect qualifying session and a great showing in the early phases of the race, the three Audi R18 TDIs occupied positions three, four and five.  At the beginning of the race, the 34,600 spectators saw a strong performance from the new LMP1 sports car from Audi. André Lotterer took the lead at the start and defended it almost to his first pitstop.

Timo Bernhard, who had started from pole, and Allan McNish (despite a spin on the first lap) were also part of the action at the front of the field during the first hour and fought some thrilling duels in heavy traffic.    However, a number of minor incidents had major effects as they caused all three R18 TDIs to lose ground.

André Lotterer, who had a clear lead in the early phase, had to be pushed backward at his first pitstop and lost valuable time in the process. His teammate, Benoît Tréluyer, had to make an unscheduled stop after picking up an unusually large piece of rubber on his front left-hand tire. Shortly afterwards, the same problem occurred again, causing the Frenchman to slide into the gravel trap and lose two laps.

Marcel Fässler subsequently complained about a car that was too demanding to drive - he, too, was struggling with rubber “pick-up”. In the end, the number 2 Audi R18 TDI designated as car finished fifth.

Timo Bernhard, who started from pole, suffered misfortune as well. The rear of his car was touched by another vehicle in the fast "Blanchimont" section. The rear hood and diffuser were damaged in the incident. Romain Dumas and Mike Rockenfeller were subsequently struggling with handling difficulties in left- and right-hand turns. Like the other two R18s, car number "1" had to make a brief refueling stop shortly before the finish. With a two-lap gap Bernhard/Dumas/Rockenfeller came fourth.

The first podium result for the new Audi R18 TDI was clinched by Dindo Capello, Tom Kristensen and Allan McNish who, like last year, took third place. While a spin by McNish on the opening lap had no consequences as the Scotsman quickly made up ground from 16th place, Dindo Capello accidentally activated the pit lane speed limiter in his stint f and lost 20sec.

After adjusting the inflation pressure of the front tires, Tom Kristensen was setting his sights on the second-placed Peugeot when the left rear tyre suddenly lost air one hour before the finish. It forced him to make an unscheduled pitstop and, with a one-lap gap, Capello/Kristensen/McNish ultimately finished third.