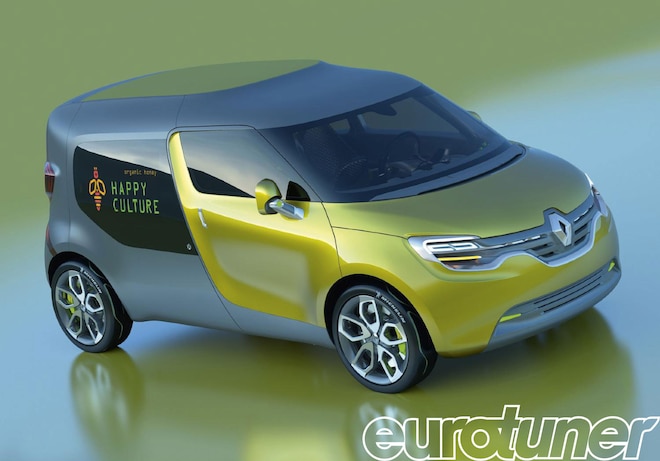 Scheduled to appear at the 64th Frankfurt Auto Show later this year, Renault has revealed details of its latest concept vehicle, called Frendzy. 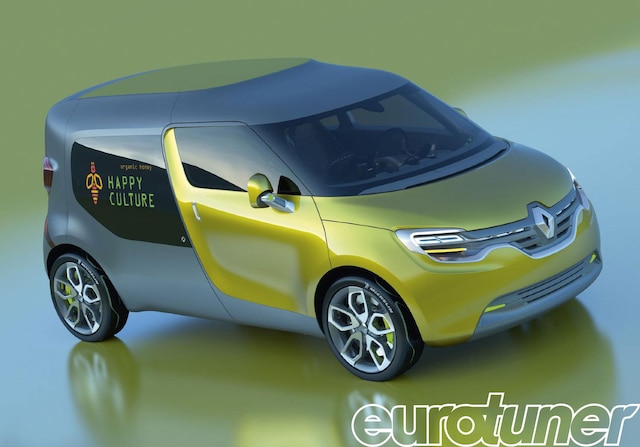 It is the fourth step in Renault’s design strategy, based on the different stages of the human life cycle. It began with the notion of ‘love at first sight’ expressed by the DeZir concept, discovered the world with Captur and started a family with R-Space. However, Frendzy presents the world of work.

The latest concept was produced under the leadership of Laurens van den Acker and is a multi-talented vehicle. As a business vehicle, it can double up as a comfortable car, meeting the requirements of business users and those of families.

It features innovations such as the BlackBerry PlayBook that controls a 37-inch digital screen on the sliding rear door. It also has unique ‘sound signatures’ inside and out, the fabric roof adapts to the shape of bulky objects and magnetic fixings allow loads to be secured to the floor. Furthermore, there’s a slate board in rear cabin for chalk drawing, a touch-sensitive pad that slides out from driver’s seat for rear passengers to watch movies or video games, and its has two-color ambient lighting to differentiate family and work time

On the outside, the passenger’s side has no glazing or center pillar. It has just one conventional door and one sliding side door, which incorporates the 37-inch widescreen display.

The driver’s side, complete with side windows, still has no center pillar, but with center opening doors, represents the world of the family. Ease of loading and ease of entry go without saying in both worlds.

Exterior designer, Deyan Denkov said: "The concept of an asymmetric body design was the most logical way to express the vehicle’s two roles. From the very start, I wanted to move away from the traditional format for commercial vehicles and, in doing so, show that this type of vehicle could also be more emotional and more attractive. I took inspiration from a wide variety of sources, including unconventionally shaped aircraft such as the Airbus Beluga and the Antonov 224.”

On weekdays, Frendzy is a vehicle that adapts to the requirements of the business user, with a large external screen that can display useful messages or information (such as “making deliveries” or “back in five minutes”, the battery-charging method or the remaining charge or advertising), either while parked or on the move.

Come the weekend, the vehicle transforms itself into a family vehicle, with a comfortable passenger seat and, in the rear, a big bench. Depending on their mood, children can watch a movie or play games on the touch-sensitive pad which slides out from the back of the driver’s seat. They can even draw on a special blackboard integrated into the sliding door.

Colored repeater lights in the headlights and tail lights provide an external indication of the mode in which Frendzy is operating. With Frendzy, Renault is once again able to showcase the practicality, modularity and versatility already proven by the Kangoo, Trafic and Master on European roads today.

The driver’s cockpit is designed around the theme of a futuristic ‘work bench’ featuring a structure which appears to be made from molten metal. Green light emanating from the dashboard brings this smooth and organic architecture to life. Dominant throughout is the sense a cosy cabin, which echoes the world of camping, and is further reflected by extensive use of wood.

Indeed, as much a symbol of warmth as it is of strength and timelessness, wood forms a link between the two modes. The leather latticework seats and removable accessories also refer to the camping metaphor. On a practical level, the fabric roof adapts itself to the shape of bulky objects, magnetic fixings allow the load to be secured to the floor, and modular stowage systems are a practical bonus for business users.

The single-piece rear seat is integrated into the floor, while the front seat folds forward to create more space. Thanks to its practical, modular interior, Frendzy lends itself perfectly to the requirements of business users and trades people. Interior designer Ana Zadnik explained: “The interior reflects its double identity: on the one hand, it provides a roomy, uncluttered cargo space and, on the other, a space that’s fun and interactive, which seats up to four people. The organic volumes of the dashboard and rear door panels are extruded by strikingly shaped “nozzles”, which become “receptors” for accessories that can be plugged directly into the dashboard and door panels.”

The BlackBerry PlayBook tablet can allow users to benefit from an effective workplace. The tablet connects directly to the center console, ensuring convenience of operation on the move. As soon as it is plugged in, it becomes an integral element of the vehicle and configures itself into the Renault environment. Continuity of work is assured once the device is removed.

The device has an important role to play, too, in the customization of the vehicle as it controls the exterior screen while the vehicle is in motion and when parked, for business as well as for personal use - pictograms illustrating life with electric vehicles, or the viewing of a movie, for example.

Sensors located on each door sill log the loading or unloading of packages equipped with RFID (Radio Frequency IDentification) chips containing key information such as destination address, weight and dimensions. This gives users a real-time inventory of the goods being carried in their vehicle. In addition, tradesmen can automatically calculate or re-calculate their itineraries on the basis of this information.

Frendzy is a commercial vehicle that’s also electric Like DeZir. Its powertrain is the same as the Kangoo Van ZE, although the charging point, located under the Renault logo at the front of the vehicle, is identical to that shown on ZOE Preview.

Extensive work has gone into the sounds the electric vehicle produces. This work was carried out in conjunction with the Institut de Recherche et Coordination Acoustique/Musique. Electric vehicles are silent, so one of the big challenges facing Renault is customizing the sound they produce for safety reasons, notably at slow speeds.

The collaboration led to the creation of a sporty sound for DeZir to convey the driving enjoyment of the car. In the case of Frendzy, the aim was to produce a custom sound to correspond to the new concept car’s duty as an “office on wheels.

Frendzy’s dual personality prompted Renault and IRCAM to develop a broad range of sounds. The program has led to a variety of sounds that are emitted both inside and outside of the vehicle to ensure that everyone can tell whether it is in business or passenger car mode, thanks simply to its sound signature. It is also possible to distinguish the passenger side (the world of work) from the driver’s side (world of the family) merely by the sound produced by Frendzy.