Motorsport fans got to see everything from Formula Renault 3.5 to Megane Trophy racers to older Renault 5 Maxi turbo, and all for free! 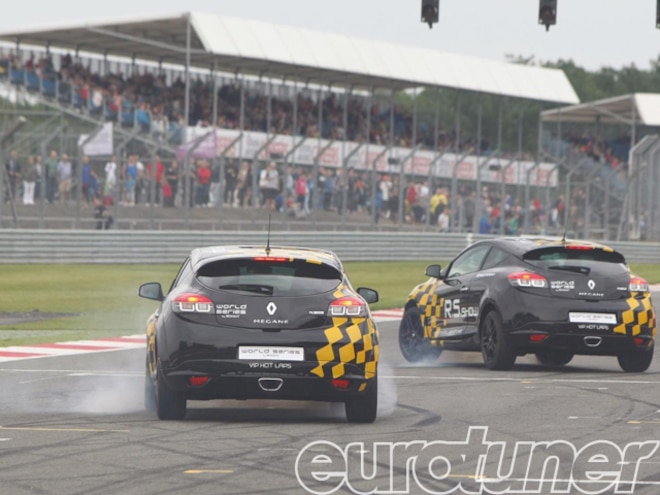 More than 120,000 people flocked to the Silverstone Grand Prix circuit on 20/21 August to enjoy an exhilarating weekend of free motorsport action as the World Series by Renault returned to the renowned venue.

Motorsport fans passed through Silverstone's gates for the two-day event, including 75,000 on Sunday alone, placing World Series by Renault as the UK's second largest motorsport meeting behind the British Grand Prix.

World Series by Renault was making its fourth visit to the circuit and treated visitors to some of the best international and national racing plus high-speed, tire-smoking demonstrations from the Lotus Renault F1 Grand Prix car with Romain Grosjean and Jan Charouz.

In addition, the free event gave open paddock access to the fans, including a pit lane walkabout, enabling them to get close to the teams and drivers competing on the 3.67-mile circuit.

Hundreds of guests took test drives in the Clio Renaultsport 200 and Megane Renaultsport 250 on a special test track, while visitors could also experience first-hand how Renault's safety features operate in an exhilarating passenger ride.

On track, top international and national racing action filled the program, including the headline Formula Renault 3.5 Series. With two pole positions and two race wins, Carlin's Robert Wickens enjoyed the perfect weekend. The Canadian's double success means he leaves the UK with a solid lead at the top of the Formula Renault 3.5 Series championship standings. It also secures a first Team title for Carlin boss Trevor Carlin and his UK team - a victory they fittingly celebrated on home soil.

The Formula Renault UK Championship enjoyed two action-packed races over the weekend. For the national-level drivers in the series it was a rare opportunity to compete on the Silverstone Grand Prix circuit in front of packed grandstands. Alex Lynn took both wins in the Formula Renault UK - which boasts Kimi Raikkonen and Lewis Hamilton among its former champions.

Renault's proud motorsport heritage was also celebrated by a crowd-pleasing display from rally legend Jean Ragnotti at the wheel of his formidable 350hp Renault 5 Maxi Turbo. This was complemented by a display of 200 classic and competition Renaults from the owner's clubs including a celebration of the 50th anniversary of the R4.