Patents are pending for innovative details such as the serrated wheel arch spoiler. 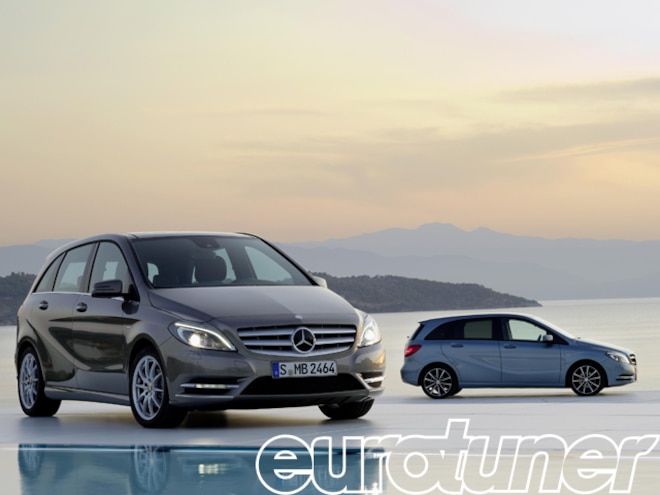 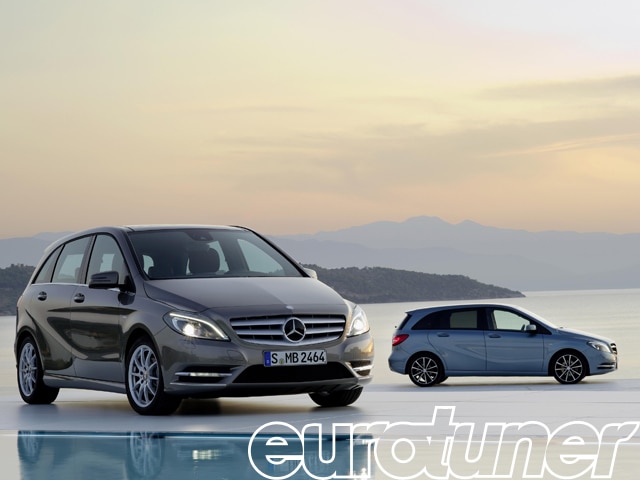 The world premiere of the new B-Class will take place at the Frankfurt International Motor Show (13-25 September 2011) where the interior space and dynamic performance of the new sports tourer will be on display.

The character lines of the exterior indicate both of these attributes: the front and rear feature width-emphasizing design, with a wide, prominent grille and headlamps extending along the sides, while the rear features a wide window, two-piece tail lights and a large tailgate with low loading sill.

The new sporty lines and the outstanding aerodynamics are evident in the side: the hood flows seamlessly into the A-pillar and the roof descends sleekly to the striking spoiler. The roof features a contoured line, which lends the vehicle a longer appearance.

The pronounced wheel arches are offset by dynamic feature lines under the beltline as an interpretation of the current design from Mercedes-Benz. The bottom edge of the body features dynamic side skirts which add a light touch to the vehicle's appearance.

An outstanding drag coefficient of cd = 0.26 places the new B-Class at the forefront of its segment thanks to consideration of the air flow around the front wheels, the underbody design and the cooling air flow. Patents are pending for innovative details such as the serrated wheel arch spoiler.

High-quality materials, fine surfaces and stylish details define a new benchmark in the compact segment. Many features have been the reserve of higher class vehicle but the dashboard, for example, is optionally available in ARTICO man-made leather finish. Four equipment packages (Chrome, Sports, Exclusive and Night package) enable individualization according to taste and budget.

The three large round vents in the middle and their uniquely designed cruciform nozzles add a sporty attribute. The display, which is available in two sizes (5.8- and 7-inch) appears to hover over the vents. The galvanized finish on the trim frame is contrasted by the piano black of the front panel.

The new B-Class features new turbocharged gasoline and diesel engines as well as new manual and automatic transmissions. For the purposes of transverse installation, the two transmissions are very compact, providing the B-Class with an exemplary small turning circle for a front-wheel drive vehicle. The engine, transmission and suspension use a four-point mounting system designed specifically to meet the high-torque engines and minimize noise levels. The hydraulic damping integrated in the transmission mount is a key factor in the ride comfort.

The new four-cylinder gasoline engines (internally designated M270) mark the launch of a completely new engine series. The combustion process is based on the third-generation Mercedes-Benz direct injection system, which was introduced last year with the BlueDIRECT V6 and V8 engines. Its use in the B-Class marks this technology's debut in the compact segment.

The new four-cylinder engines have been designed for both transverse and longitudinal installation. In the new B-Class they are initially available as a 1.6 liter, in the B 180 it’s rated at 122hp and the B 200 has an output of 156hp. The maximum torque of 150 and 180 lb-ft respectively is available from an engine speed of 1250rpm.

The new four-cylinder diesel engine is a further development of the OM651 deployed in the C- to the S-Class third generation common-rail direct-injection engine. At 1.8 liters, the B 180 CDI generates 109hp of power, while the B 200 CDI has an output of 136hp. Maximum torque stands at 180 lb-ft from 1400rpm and 220 lb-ft from 1600rpm respectively.

Another Mercedes-Benz premiere is the new 7G-DCT dual clutch transmission. It is extremely compact and features an electric oil pump for start/stop capability. The new 6-speed manual transmission designed along similarly compact lines as a three-shaft transmission is a close relative of the DCT. Extremely easy gear shifting, low shift forces, low internal friction and a low weight are among its characteristics.