The HX1 was designed with MPV architecture to seat up to six people, it has adaptive aerodynamics and boasts 299hp from its plug-in diesel hybrid powertrain. 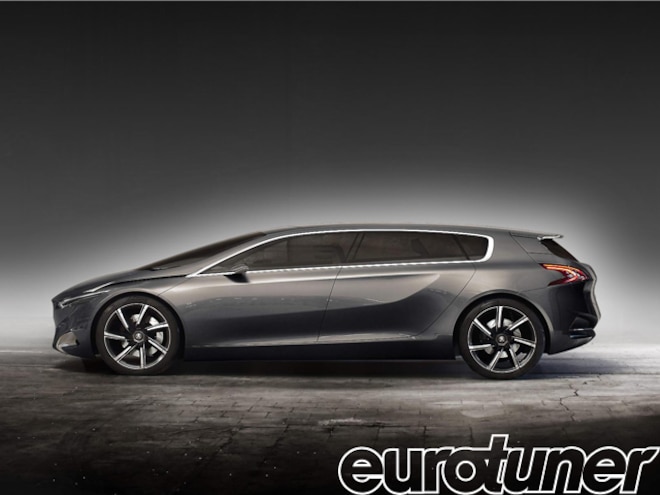 The HX1 Concept Car was designed as a vehicle for up to six people, offering strong styling, that is sporty and efficient. To achieve this, it uses aerodynamic flaps to optimise aero efficiency according to vehicle speed as well as by using the HYbrid4 ‘plug-in’ technology. 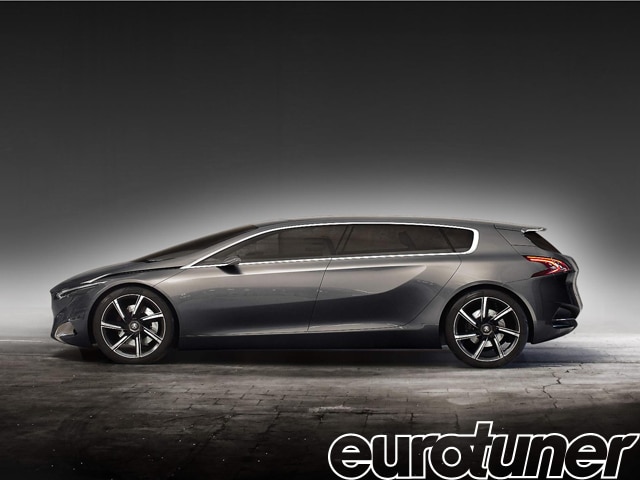 To meet specifications, the HX1 was designed with MPV architecture to allow a volume suited to elegant and sleek lines that delivers a low 0.28 Cd figure for maximum efficiency.

Four reverse-opening ‘half-scissor’ doors can be opened wide for ease of access to the passenger compartment as well as to create visual drama. The passenger compartment is structured to offer maximum comfort for two passengers in the rear. If required, two retractable seats can be configured in a center row with clever “pull-out seats”, based on the principle used on the HR1 Concept Car (First seen at the 2010 Paris Motor Show); these additional seats are integrated behind the front seats.

The seven ‘spokes’ in each wheel rim are fashioned like a turbine blade, opening to create a flat surface. At the same time, a spoiler and two side skirts on the tailgate are deployed above 62.1mph. When moving, the HX1 therefore adapts to its environment.

At the front, HX1 enhances Peugeot’s latest design identity. The theme of a unique ‘floating’ grille has been designed to harmonize with the car's tapered lines.

A interior that refines the ‘Motion & Emotion’ brand with futuristic design as well as the materials used – such as floor and fittings in natural oak with inlaid fiber optics, brushed metal, leather, etc. It also has digital touch-sensitive displays, LED spotlights, backlit strips on the headlining, and all contribute to an environment where modernity meets refinement.

The two sculpted rear seats recline, and a set of controls are grouped in the armrest. The center console also includes a minibar and coffee machine, a discreet acknowledgement to the history of Peugeot products. This console is adorned with white Carrare marble to contribute to the exclusive, modern environment.

The HX1 integrates HYbrid4 technology from the Peugeot 3008, which was the first diesel hybrid in the world. With the diesel engine at the front (powering the front wheels) and an electric motor to the rear (powering the rear wheels), this technology enables four-wheel drive for increased safety and traction. It also enables the vehicle to be driven at low speeds powered just by the electric motor in Zero Emissions mode.

Under the hood of the HX1 the engine is a 204hp, 2.2 liter HDi diesel, linked to an automatic six-speed gearbox. Coupled with a 95hp electric motor, the combined output can develop 299hp.

The HX1 is also equipped with ‘plug-in’ function: the lithium-ion batteries can be recharged by plugging to a standard European 240V electric socket. This means it can have a longer ‘ZEV’ range and can cover up to 18.6 miles in all-electric drive mode. The HX1 thus obtains a combined fuel consumption of 88.2mpg with CO2 emissions of 83g/km.

When creating the HX1, Peugeot teamed up with Pierre Hardy, creator of luxury shoes to design an exclusive ‘concept-shoe’ that would also have a unique capacity for transformation.

In collaboration with Stylists from Peugeot, Pierre Hardy created a shoe using materials, technology and quality of manufacture that echoed the interior of the vehicle.

In the image of this Concept Car, the shoes adapt to the life of their wearer: a slipper for driving slides into a ‘high-heel’ structure to become an elegant shoe for more glamorous occasions.