Peugeot finished 2011 with a sixth race win from seven races and a fourth one-two in the Intercontinental Le Mans Cup. 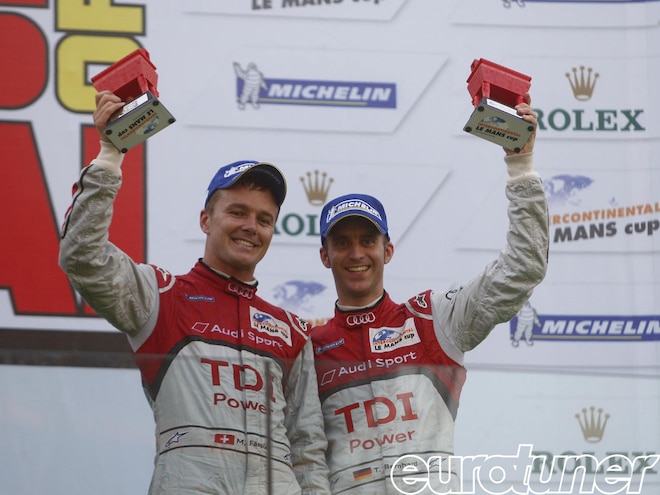 Anthony Davidson and Sébastien Bourdais claimed victory at Zhuhai ahead of Franck Montagny and Stéphane Sarrazin, after a close race in which the Peugeot 908s combined performance, reliability and endurance. The one-two finish in China rounds off a successful year for Peugeot, which has seen them secure a second ILMC title from close rivals Audi.

The final race of the season was decided by strategy. “Given the heat and track conditions, we chose to alter our strategy during the race”, explained Bourdais. “I did a triple stint, two of which were on the same tires. This enabled us to pull away from the Audis, which were very quick.”

The number 7 car drivers held a narrow lead over Stéphane Sarrazin and Franck Montagny right to the end of the race. Lapping at the same pace, the two Peugeots controlled proceedings at the end, gradually extending their lead.

The Race:
At 11am, under a blazing sun, the race began at an incredibly fast pace. Starting from pole position, Bourdais turned into the first corner ahead of Franck Montagny. The no.8 driver found himself overtaken by both Audis before the end of the first lap.

The top four, with Sébastien Bourdais ahead of Allan McNish, Timo Bernhard and Franck Montagny, were lapping at a similar pace.

With ten minutes gone, the first backmarkers were overtaken by the leading cars. Hampered by the traffic, Bourdais lost three places, falling back to fourth. The first round of pit stops changed the leaderboard.

The Audi no.1 opted for a double stint with the same tires, whereas the Peugeot team decided to change the tires on both cars. The German car returned to the track in front with a 20-second lead over Montagny and Bourdais. Meanwhile, McNish lost a lap for repairs after a clash.

Gradually, the pattern of the race was formed, with three cars lapping together at the front, the Audi no.1 ahead of the two Peugeots. Noticing Bourdais was pushing the pace, Montagny let his team-mate past shortly before the second round of pit stops. This was the point at which different strategies were adopted.

In the Peugeot no.8, Sarrazin took over from Montagny at 12.28pm, whereas Bourdais refueled and completed a triple stint, two of which he did on the same tires. He therefore grabbed the lead, moving around 15-seconds ahead of the Audi no.1, driven by Marcel Fässler.

The race positions changed with each round of pit stops. At the start of his second stint, Fässler found himself at the front, ahead of Sarrazin, while Anthony Davidson got into the Peugeot no.7.

At the half-way stage, with both Peugeots on longer stints, they picked up the pace. Negotiating the traffic, Sarrazin moved past Fässler on lap 113. Two laps later, Davidson produced a great overtaking move for second place. The British driver only took a few laps to close the gap to Sarrazin. He then moved ahead at 1.56pm, just before Sarrazin came into the pits to hand over to Montagny.

In his second stint, Davidson managed to build enough of a lead for Bourdais to come back onto the track in the lead after the Peugeot no.7’s fifth pit stop. With only a few seconds between them, it was only through slower traffic that the Peugeot no.8 lost touch with the race leader.

After successfully completing 249 laps, Sébastien Bourdais and Anthony Davidson were the first to take the checkered flag, followed by Franck Montagny and Stéphane Sarrazin, thus securing a fine one-two finish for Peugeot.

For Audi Sport Team Joest, they achieved another podium result with the Le Mans winning Audi R18 TDI at the season finale. Timo Bernhard and Marcel Fässler finished the 6-hour race in third place after Allan McNish and Tom Kristensen in the "sister car" were forced to retire following a collision.    As was often the case this year, Audi Sport Team Joest was lacking the necessary luck at Zhuhai after both R18 TDIs had been setting the pace at the beginning of the race.

The Audi squad was not able to enjoy the lead for long though: Allan McNish lost a lap when the rear bodywork had to be exchanged during the first refueling stop as a result of contact with a GT car.

More serious consequences were caused by the mistake of an LMP1 car, which made a braking mistake in Turn 1 and slid into the rear of the Audi, cutting a cable harness. The resulting short circuit caused irreparable damage to the onboard electronics and led to the car’s withdrawal.

With Timo Bernhard and Marcel Fässler running at the front of the field for a long time, car number "1" lost time with degrading tyres. While trying to overtake the leading Peugeot and return to the lead lap, Fässler went into a spectacular spin shortly before the end of the race. The Le Mans winner managed to regain control without touching the barrier and thus secured third place.

However, it wasn’t all bad news for Audi. In the GTC class, Audi recorded a one-two-three success at Zhuhai, with Audi Sport customer racing China celebrating a victory on its first appearance.

Final standings for the 2011 6 Hours of Zhuhai: