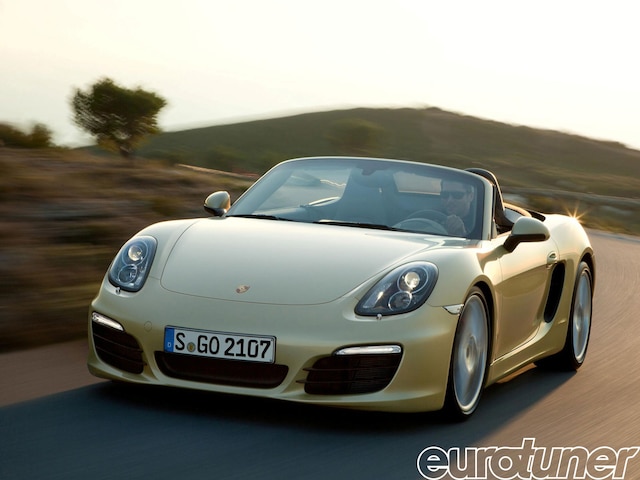 The Boxster has an all-new lightweight body, new flat-six engines with direct injection, a completely revised chassis and updated styling.

Considerably lower weight, a longer wheelbase, widened track and larger wheels significantly enhance the driving dynamics of the mid-engined sports car. These attributes, combined with new features including electro-mechanical power steering, result in the new Boxster not only offering superior performance but up to 15% greater fuel efficiency.

The styling of the new Boxster gives it shorter front and rear overhangs, while the windshield is moved forward. The car also has a flatter silhouette and sharper lines.

Inside, passengers are enclosed by a new electric hood, which dispenses with the compartment lid when stowed.

The Boxster and Boxster S return, both powered by the famous flat-six engines with direct fuel injection as well as electrical system recuperation, thermal management and start/stop function.

The new power unit fitted in the Boxster delivers 265hp from a 2.7 liter motor – 10hp more than its larger predecessor. Technically, it is now based on the 3.4-liter engine of the Boxster S.

Both models feature a manual six-speed transmission as standard, with the seven-speed dual-clutch Porsche Doppelkupplungsgetriebe (PDK) available as an option.

Both models achieve their best fuel consumption and acceleration with the PDK. Zero-62mph is achieved in 5.7sec for the Boxster, 5.0sec in the Boxster S.

To enhance the driving further, the Sport Chrono Package option is offered on the Boxster, featuring Dynamic Transmission Mounts for the first time. Also new in the Boxster is the option of Porsche Torque Vectoring (PTV) with a mechanical rear limited-slip differential.

The Boxster S adds 19-inch alloy wheels, partial leather interior and Bi-Xenon headlights in addition to the power advantage of the larger engine.