The initial idea of the 16.4ft high Chevrolet bust began with the story of the man whose name became known around the globe. 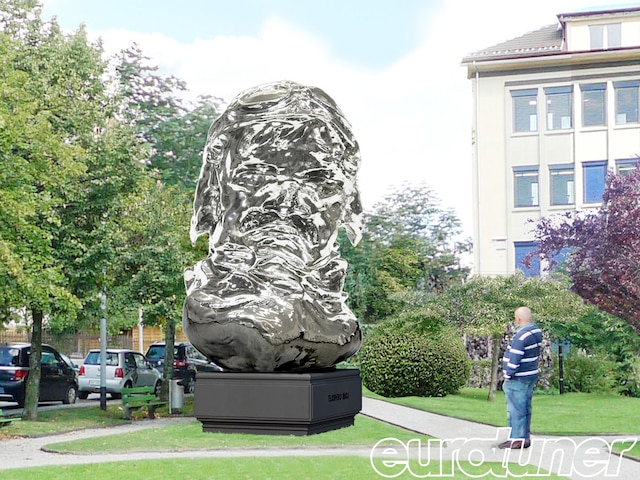 To mark Chevrolet’s centennial, the company is holding several events and marking the anniversary in special ways. Among them is the culmination of the Chevrolet centennial art contest.

The competition began on November 3, 2011, which was the 100th anniversary of the brand. An international panel of judges then a sculpture by emerging artist Christian Gonzenbach as the best of four creative entries.

His proposal won out against the submissions by Lang/Baumann, Costas Varotsos as well as Olivier Mosset and Sylvie Fleury.

The giant, polished-steel bust will be situated in Parc de l'Ouest in the Swiss town of La Chaux-de-Fonds. It is designed to remind visitors of the Louis Chevrolet was one of its most famous sons.

"Christian Gonzenbach created a work of art the jury found the most emotionally engaging of the four unique proposals. His approach is as pioneering as the man who founded the Chevrolet brand. The visual complexity and ever changing reflections will make this piece of art very intriguing," said Susan Docherty from Chevrolet Europe and chairwoman of the jury.

Gonzenbach from Geneva, Switzerland responded: "Many thanks to the jury for the confidence they have placed in me and my project. I am thrilled to have the opportunity to artistically express the pioneering spirit of 100 years of Chevrolet and carry forward the dynamism that Louis Chevrolet embodied throughout his life,"

The initial idea of the 16.4ft high Chevrolet bust began with the story of the man whose name became known around the globe. The figurative abstract sculpture will mirror the dynamic personality of Louis Chevrolet and the city life that surrounds it.

"We are very grateful for this generous donation by Chevrolet that will create a landmark to attract tourists, art lovers and car fans to La Chaux-de-Fonds," said Laurent Kurth, councilor of La Chaux-de-Fonds.

The winning artwork commemorates 100 years of one of the world's best-known car brands and expresses the values for which Chevrolet and its Swiss-born co-founder have become known in 140 countries around the world.

The Chevrolet Centennial Artwork concludes a series of initiatives that marked the hundredth birthday of the world's fourth largest car brand.