The Main Partners will be Effenbert beer, Pirelli and Tudor Timing. 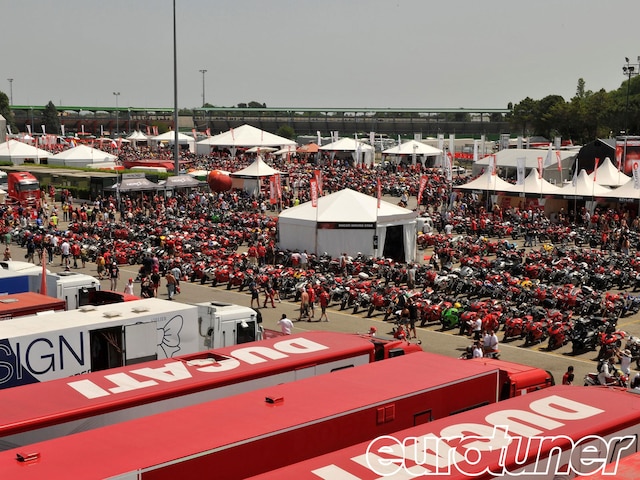 As Ducati makes final preparations for World Ducati Week 2012, the Italian motorcycle manufacturer has revealed the companies that will partner at the Misano Adriatico circuit on June 21-24.

The Main Partners will be Effenbert beer, Pirelli and Tudor Timing.

Effenbert is a key player in the World Superbike Championship as title sponsor of Team Effenbert Liberty Racing. The race team will attend the event with riders Jakub Smrz, Sylvain Guintoli, Maxime Berger and Brett McCormick.

Effenbert will also present the “Galaxy of Adrenalin” – one of the WDW2012 themed areas with freestyle performances by the “Team DaBoot”. The rest of the paddock will be cooled with alcohol-free Effenbert beer.

Ducati’s official Timing Partner, Tudor will sponsor a number of activities in the “Heritage Galaxy” area, including the celebration of the 40th anniversary of Paul Smart’s historic win in the 1972 Imola 200, the Ducati Vintage contest and an Elegance contest for vintage motorcycles.

As advance ticket sales suggest record attendance, WDW2012 is ramping-up for four days of motorcycle fun and entertainment on “The Planet of the Champions”, an event also made possible by WDW2012’s Official Partners.

The event will include the following vendors: Arai, the quality helmet manufacturer with countless graphic designs inspired by Ducati’s models, will attend WDW2012 with a special helmet service and plenty of useful tips on maintenance.

Arrex Curva Rossa will display the new design kitchen by Arrex and Ducati. Inspired by the streamline profile of Ducati motorcycles, the innovative Ducati-style kitchen was presented for the first time at the international furniture show Salone del Mobile 2012.

Bellenda, the famous Spumante wine, will also be at WDW2012 and, thanks to its partnership with Ducati, will take this opportunity to present its latest wine branded Ducati Caffe’ by Bellenda.

Cartorama, the leading Italian manufacturer of educational stationery products will proudly display a selection of Ducati-branded items, which may also be purchased at WDW2012.

Cantine Cecihas been associated with Ducati for a number of years, producing wine varieties inspired by the Bologna-made motorcycles. “Otello per Ducati Caffé”, a Ducati Caffe’ special version of the very popular Otello Nero di Lambrusco, and “Piega”, the new Ducati Caffe’ branded Decanta 68.2 will also be available at WDW2012, associated together with Ducati in the name of Italian excellence.

Dainese, the leading motorcycle riding gear manufacturer, is one of the most prestigious names to have traditionally supported and protected Ducati and its passionate riders. Dainese will be in attendance to offer advice and to facilitate the purchase of made-to-measure technical apparel.

Ducati Caffè, the coolest lounge bar at WDW2012, will provide a stylish break between fun activities, reproducing the decor of one of the exclusive and world-famous Ducati bars.

“Fight for me Ducati”, the exclusive Ducati perfume, will provide a special test and sale area in the Misano circuit paddock.

Niloxsports and entertainment technology will present its brand-new Ducati Action Camera at WDW2012, a Ducati-customised helmet camera designed for all those who wish to capture the most exciting riding moments of their bike journey or track days or, indeed, WDW2012 at Misano. Ten helmets equipped with Ducati Action Cameras will be made available to all riders who sign-up for a track test ride on the Ducati’s brand-new 1199 Panigale, capturing their own unique experience forever.

Shell Advance will gift all WDW2012 visitors two Euros of V-Power fuel coupons with each ticket to be used at fuel pumps near the Misano circuit.

Superfluo, a new partnership with Ducati, has produced “Aradio”, an FM radio manufactured in Italy and previewed at WDW2012.

TIM, since 2004 the prestigious partner of Ducati in the MotoGP World Championship and as of this year also with Team Althea Racing in the World Superbike series, will attend WDW2012 with special initiatives and social network activities.

Wurth, the world-leader of fasteners, mounting products and system distribution with a range of over 100,000 items, will also make its expertise available at WDW2012 with a helmet cleaning service.

All WDW2012 info available at www.ducati.com