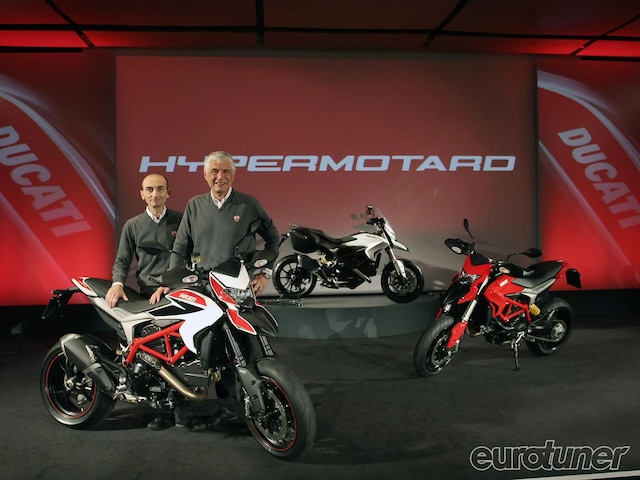 Using the EICMA International Motorcycle Show in Milan as its stage, Ducati announced news of its 2013 model range, as well as its motosport activities and financial report.

According to Ducati CEO Gabriele Del Torchio, the company has continued to grow both in market share as well as production and sale volumes despite the market remaining weak. "Ducati's record turnover of 2011, looks set to increase 20% by the close of 2012 with over 44000 motorcycles registered. Our market share has also grown from 2.4% in 2006 to 5.2% in 2012. Ducati has become more global, with 9 out of every 10 motorcycles destined for foreign markets. The USA is currently our top market, achieving a consistent two-figure growth, while other geographical areas, such as the Far East and Latin America where we are investing major resources are yet to reach their full potential."

Four Ducati riders have already been confirmed in MotoGP, with Nicky Hayden and Andrea Dovizioso in the factory Team, with Ben Spies and Andrea Iannone in the satellite team.

In World Superbike, after dropping the world champion Team Althea Racing, the factory has signed a new agreement with Team Ducati Alstare, coordinated by Francis Batta. They will run 2011 champion Carlos Checa and Ayrton Badovini on the new 1199 Panigale.

The new generation Hypermotard family will include the Hypermotard and Hypermotard SP as well as the introduction the Hyperstrada as a an accessible mid-range tourer with everyday practicality.

The Hypermotard and SP deliver a fun experience, whether on the daily commute or in supermoto action, while the Hyperstrada awaits long distance adventure.

Brand new from the ground up, the models introduce the new 110hp 821cc Testastretta 11? engine in a new Trellis frame. The Hypermotard and SP use sharp styling to maintain that supermotard look, while the Hyperstrada is accessorised with touring specification.

The "R" builds on the "S" specification and applies a list of enhancements such as titanium connecting rods, which save 1.38 lb, a 1.54 lb lighter flywheel, DLC-coated rocker arms and revised engine mapping enhance the crank acceleration and allow it to rev 500rpm higher to 12000rpm despite its large 112mm pistons.

The model also features a four-point adjustable swingarm pivot, and a race kit consisting of new screen, machined alloy mirror caps and a Termignoni exhaust system with dedicated ECU mapping (for track use only). The system provides a power increase of 3% at the top of the rev-range and 15% in the mid-range. Additional enhancements include a lightweight carbon fiber rear hugger, rear suspension guard, heels guards, ignition switch surround and top fairing inner panels. There are also carbon fiber protectors on the single-sided swingarm and clutch cover. These lightweight components give the "R" a dry weight of just 363.7 lb with ABS fitted as standard.

The model is also fitted with a race-style seat fabric for added "feel" as well as GPS-enhanced Ducati Data Acquisition for automatic lap times and circuit map-linked data.

The 1199 Panigale R is finished in red with white highlights, and a mix of red and brushed aluminum on the fuel tank, while the forged Marchesini wheels are black.