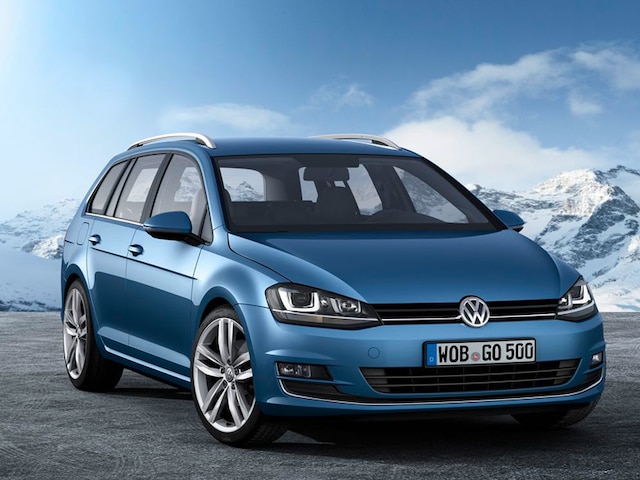 This week VW will expand the Golf range even further at the 83rd Geneva Salon de l'Automobile with the debut of the new Golf Variant (wagon). Like the new Golf hatchback, the Variant is significantly lighter than its predecessor, to the tune of up to 232 pounds.

Along with it's new diet, the car will be offered in a TDI 4Motion AWD drivetrain and hosts various new safety features putting this wagon above its competition. Its striking new design keeps with the new Mk7 features of crisp shoulders and aggressive wide new front fascia.

For the first time, Volkswagen is also offering the Golf Variant as a stand-alone and extremely fuel-efficient TDI BlueMotion model in Europe. The 110-horsepower Variant is the most fuel-efficient Volkswagen wagon ever, with an EC combined fuel economy figure of 71.3 mpg (equivalent to 87 g/km CO2) when equipped with the six-speed manual transmission.

The all-wheel-drive Golf Variant 4Motion will also debut in Geneva. It will be available as a TDI Clean Diesel model with 105- and 150-hp engines. Volkswagen has a Golf Estate TGI BlueMotion with natural gas drive (CNG) in the pipeline. That combines great gas mileage and excellent performance with premium quality and versatility.

The versatility has been improved even further in the new model because the trunk volume with the seats in place has been expanded by 20 percent; with the rear seats folded, the load area is increased by nearly nine percent.

The cargo area is now 41.5 inches long; with the rear seats folded, the length is 72.1 inches; and the load sill is just 24.8 inches high. Thus, the Golf Variant is up to the majority of hauling tasks. For the first time, the wagon features a roller blind with a two-step roll-up mechanism to cover the luggage compartment: when it's not needed, the blind and the compartment's net partition can be stowed under the cargo floor.

In addition, the cargo floor is adjustable for height and can be locked in different positions. The split rear-folding seat has also been completely redesigned and is more practical and easier to use, while there are now four bag hooks in the trunk area. 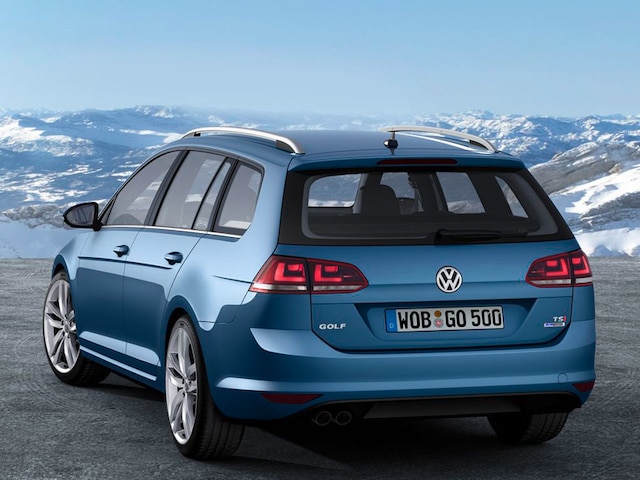 It retains the precise and timeless lines that mark out the new Golf, but it is obvious that the car was designed in parallel with the hatchback and not simply derived from it.

That's why the silhouette of the new Golf Variant is particularly distinctive, although there is one common design theme at the back of the car: The designers succeeded in transferring the classic Golf C-pillar shape, which is like a drawn bow, to the D-pillar of the Variant. Visually, the "third" side window forms a part of the D-pillar.

In contrast to the Golf hatchback, the so-called character line is picked up again behind the rear wheel arches and carried over completely to the rear of the vehicle, lending an even more muscular appearance. The precise windowsill, the long side window, and the slightly rearward-sloping roof underscore this dynamic look. In addition, the new Golf's revised proportions- short body overhangs and a wheelbase that is increased from 101.5 to 103.8 inches-further enhance the sportiness.

Typically Golf. The new two-part taillights on the Golf Variant emphasize its family resemblance to the rest of the Golf range and reflect Volkswagen's Brand DNA. The half of the taillight that's integrated in the trunk lid, however, is bigger than in the hatchback version and forms a longer parallel line with the graphic on the lower part of the trunk lid. In addition, a clear-cut difference between the Golf Variant and the "classic" Golf exists in the design of the middle part of the trunk lid and the bumpers: Whereas the license plate of the hatchback model is in the bumper, the designers of the Golf Estate decided to integrate it with the trunk lid.

TDI BlueMotion goes its own way. In Germany, the Golf Variant will be available in the Trendline, Comfortline, and Highline equipment lines, but the TDI BlueMotion model will only be offered in Trendline and Comfortline trims. The TDI BlueMotion is not only different from the other models in the range from a technical standpoint, but also visually. From the front, the most fuel-efficient Variant can be distinguished by a partially closed radiator grille shutter, while flaps on the rear window rim identify it from the back. In addition, the model is equipped with an optimized underbody and wheelwell paneling, a 0.6-inch lower ride height, and super-low rolling resistance tires. There are also TDI BlueMotion badges on the front, back, and side of the body, as well as an optional "Clearwater Blue metallic" color.

Like all new Golfs, the Variant is equipped with a Stop/Start system and battery regeneration mode. For the first time on a wagon, it also has the new Automatic Post-Collision Braking System, which automatically slows down the vehicle when it is involved in an accident in order to further reduce its residual kinetic energy. Standard features on the European model include: 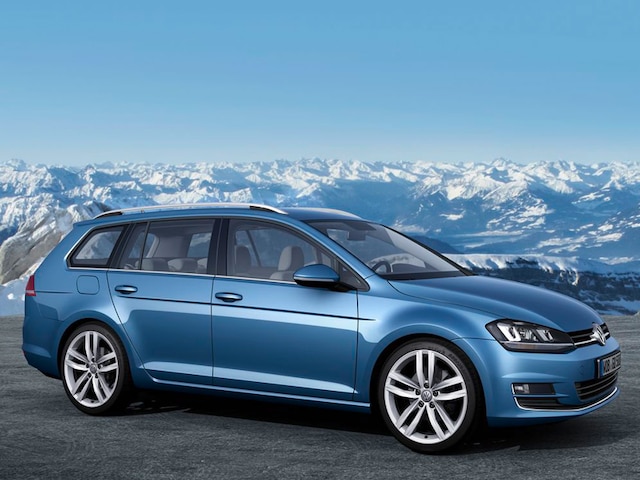 As a new feature, the PreCrash preventive occupant protection system is available for the new Golf Variant. If this system detects a potential accident situation, the driver's and front passenger's seatbelts are automatically pre-tensioned to ensure the best possible protection by the airbag and belt system. When an even more critical situation is on hand, such as severe oversteer or understeer with ESC intervention, the side windows are closed (except for a small gap), along with the sunroof. When the windows and roof are nearly closed, the head and side airbags offer optimal energy absorption and are therefore at their most effective.

Moreover, a broad range of high-tech systems is on offer for the Variant. They cover technologies like Front Assist that includes the City Emergency Braking function; Automatic Distance Control (ACC); Lane Assist; Driver Alert system; road sign recognition and the latest generation of Park Assist; Light Assist and Dynamic Light Assist. More new systems have been added, such as progressive steering; a newly developed ergonomic sport seat (ergoActive seat); a guard against using the wrong fuel in the diesels; and a new deluxe heated windshield. A driving profile selector is also a new feature: it has up to five modes-"Eco," "Sport," "Normal," "Individual", and "Comfort". The last named is only available in in combination with the DCC adaptive chassis control that is available for the first time on the Golf Variant. 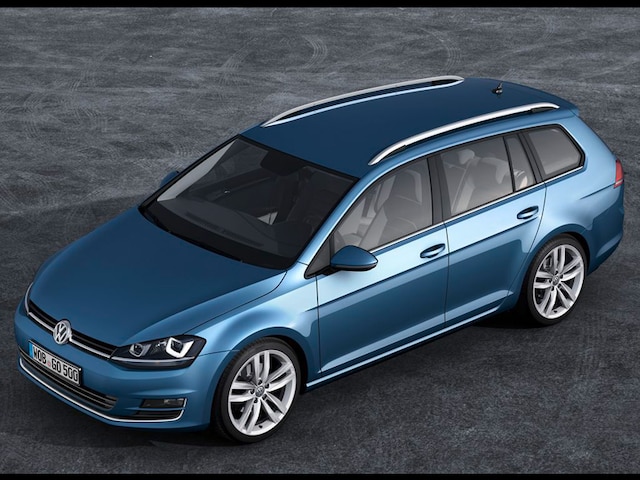 Sophisticated infotainment. All Golf Variant models have touchscreen interfaces for their infotainment systems as standard. The new generation of systems is available with three different display sizes: 5 inches, 5.8 inches and 8 inches. Once you arrive at the mid-size screen, the displays have proximity sensors: as soon as the driver or front passenger moves a finger near to the touchscreen, the system automatically switches from display to input mode. The displays also have a function that lets users scroll through lists or browse CD covers in the media library with a swipe of the hand. Optional features include a high-end sound system by Dynaudio(r).

Just like the new Golf hatchback, the Variant uses two newly developed engine families-the EA211 gasoline engines and the EA288 turbodiesels. All Variants are fitted with a Stop/Start system that reduces fuel consumption by up to four per cent and a battery regeneration mode that cuts CO2 emissions by around three per cent.

The new Golf Variants have either a five- or six-speed transmission, depending on the engine. Most of the TSI(r) and TDI engines may also be combined with a DSG(r) dual-clutch automatic gearbox.

The new EA288 TDI diesel engines are incredibly efficient. The three high-tech diesels make 105, 110, and 150 horsepower, and return between 71 mpg for the BlueMotion and 56.0 mpg for the torquey 150-hp version.