Faraday has built something very quick 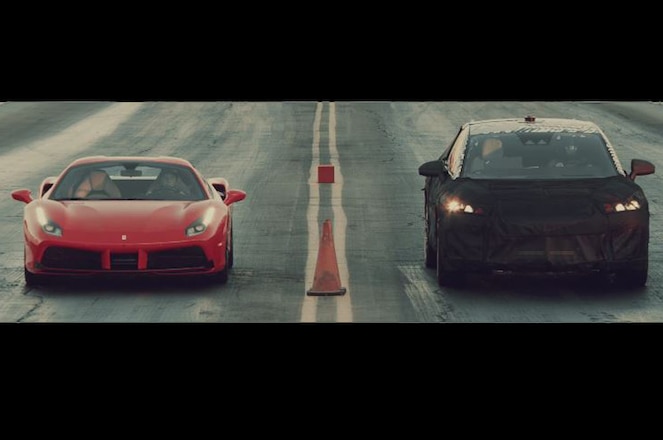 Last week, Faraday Future teased a video of its prototype drag racing a Bentley Bentayga, Ferrari 488 GTB, and a Tesla Model X P100D. That video is now out, and there is no denying that Faraday has built something very quick.

"We set out to make this car sub-four seconds, 0-60," a VP of engineering states in the video. It then cuts to footage of the prototype launching on its own, a mostly quiet affair typical of electric vehicles like the Model X.

The first drag strip battle competitor is the Bentley Bentayga, which the British automaker says goes from 0-60 mph in 4.0 seconds. In our test, however, the 12-cylinder luxury SUV did the deed in just 3.5 seconds. Next up is the Ferrari 488 GTB, with a manufacturer estimated 0-60 time of 3.0 seconds flat. The Faraday prototype gives both the British SUV and the Italian supercar a good fight.

The drag strip demo ends with Faraday's top bogey—the Tesla Model X P100D, with a manufacturer estimated 0-60-mph time of 2.9 seconds. Both EVs execute a good launch off the line, but one crosses the finish line by a full car length.

Faraday concludes the video by saying "there's more in there," hinting that the final production version could be faster still. Faraday is slated to unveil its new vehicle next month at the 2017 CES show in Las Vegas where we expect to learn more important details about the automaker's first production EV.