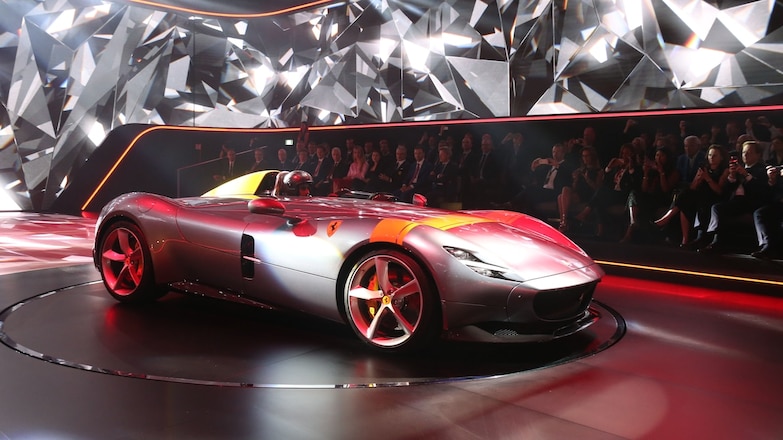 Ferrari not only launched a new, limited edition duo of supercar barchettas with the Monza SP1 and SP2, but it also launched a fourth pillar of the brand. The house that Enzo built is calling the latter Icona—Italian for Icon—and if the Monzas are any sort of indication, expect to see some radical Ferraris in the future. But we're jumping ahead. Let's look at the Monzas. 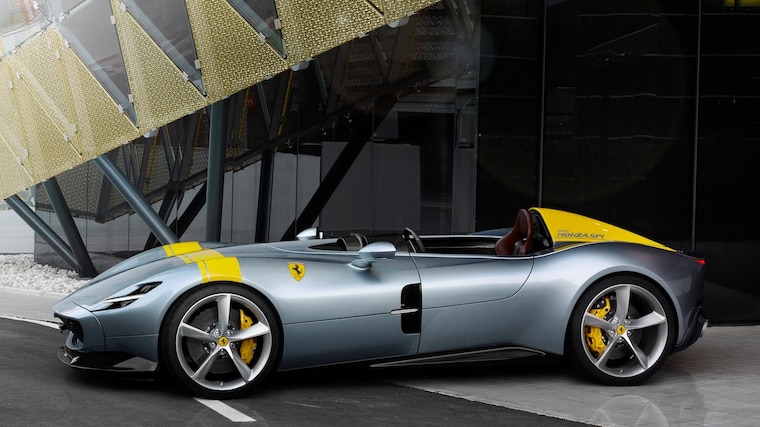 Barchetta means "boat tale" in Italian, but Ferrari is using the term to mean a vehicle without a traditional windscreen. Both versions of the Monza come with a Virtual Windscreen, a carbon-fiber hoop in front of the driver that diverts air up and over one's head. You'll probably want to wear a helmet anyhow, but luckily a custom fit one by Berluti comes with the car. You get a pretty nifty driving suit by Loro Piana, too.

Ferrari's design team looked to the past—specifically the 166 MM and the 750 Monza—for inspiration. But they did not want to go retro. All they wanted to take from the old cars was purity of line, harmony of shape, and the "Symbiosis between driver and car."

Uh, yeah! Under the long hood sits a modified version of the screaming 6.5-liter V-12 from the 812 Superfast. In the Monza it makes 809 horsepower, up by 30 from 789 hp. The gains are mostly achieved via variable-length intake ducts. Torque stays steady at 530 lb-ft. The chassis is in fact the aluminum undercarriage from the 812. The body, however, is mostly carbon-fiber pieces with bits of Kevlar tossed in here and there. Ferrari says it's 15 percent lighter than aluminum panels. 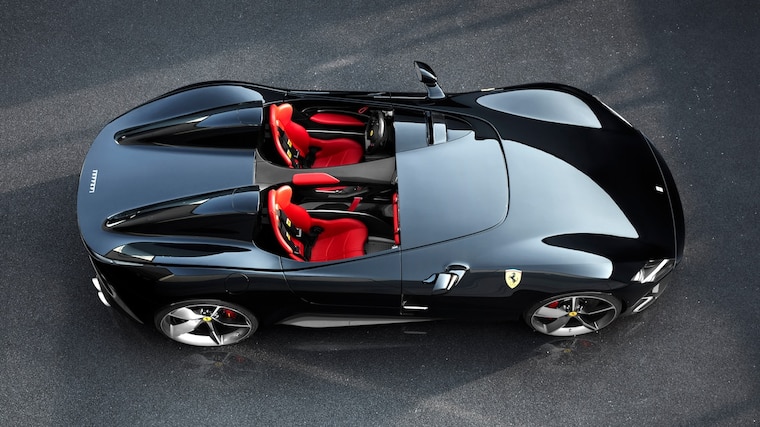 If you like driving around with your friend, you're going to want to opt for the Monza SP2, as it has two seats. Happiest by yourself? Opt for the monoposto, the single-seater SP1, as there is literally no passenger seat. We're not even sure the door opens (it probably does), but the space where the passenger seat would sit is encased by a tonneau cover. This is the one we would get. The SP1 is lighter than SP2 (Ferrari is claiming a "dry weight" of 3,306 pounds for the one-seater and 3,351 pounds for the duoposto. Also, "dry weight" is Italian for hahahahaha!!!)

How Many Are They Building?

Great question. Less than 500 between the two models, and they will let customer demand determine the mix. If everyone listens to us, there will be no SP2s built save for the black one they showed. However, we'd imagine most customers are going to be a touch more mature and opt for the second seat. What a pity. Only time will tell. 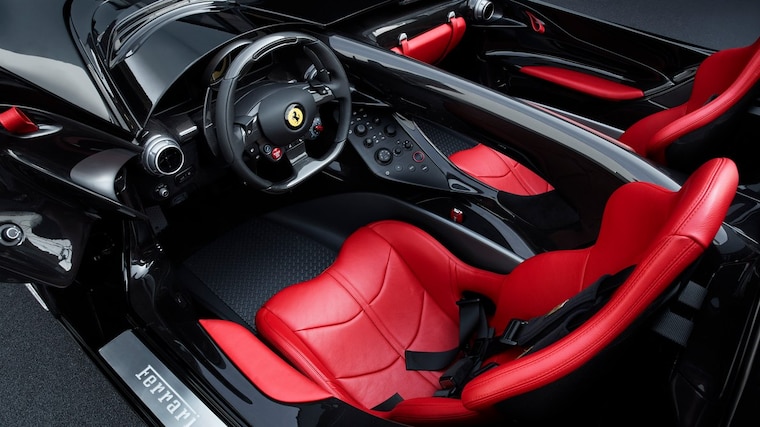 Ferrari won't say officially until the Paris Motor Show, but we think $2 million a pop is a pretty safe bet. A bargain, too, when compared to a limited edition like, say, the F60 America, which went for $2.5 million and was essentially just an F12 with the roof hacked off. Though Ferrari did only build 10. But hey, back to the Monzas. You get a free leather-wrapped carbon-fiber helmet plus other clothing! Not the worst deal ever.

Yes—Ferrari now consists of four pillars: Sport, which is made up of 488 and 812 (as well as an upcoming mid-engine supercar); GT, which consists of Portofino, Lusso, and the upcoming SUV-ish vehicle, now called Purosangue; Special Series, including cars like Pista and the previous F12 TdF; and the new pillar, Icona, which for now only has the new Monza in its stable. Ferrari would not announce the cadence of offerings but did say that going forward, Special Series and Icona will make up about 5 percent of the company's sales volume each. Sport cars will be 50 percent, and GT machines will be the remaining 40 percent. Until the Purosangue shows up in 2021 for the 2022 model year and changes everything.

Ferrari will bring out 15 new products from 2019 through 2022. And by 2022, 60 percent of Ferraris will be hybrids. We'll see two flavors of the mid-engine Ferrari: a replacement for the 488 and a supercar above that—but not a hypercar.