Toyota’s most affordable Supra has an inline-four, but it looks pretty much like the top-of-the-line 3.0 A91 model.

The fifth generation Supra has already received more than enough criticism for collaborating with BMW and sharing much of the same DNA as the Z4. Well, if you're a Mk4 Supra purists, chances are you were filled with rage once again as last week when Toyota USA announced they'll be offering a turbocharged 2.0-liter four-cylinder option to live alongside the 3.0-liter inline-six. A four-cylinder Supra? Are you serious? A Supra was meant to have the roar of six, not the purr of a four banger, right? Well, after attending Toyota's press conference of the A91 Supra at Daytona International Raceway, I was able to dive a little deeper into the new 2.0, sit in on an informative roundtable with Supra chief engineer Tatsuya Tada, and also snap some real photos of the first 2.0-liter Supras on American soil (since first photos are from the official press release). I'm still not sold on the four-cylinder Supra, especially as a 3.0 A90 Launch Edition owner myself, but what I learned from the Toyota team and Tada-san made some sense. It'll just be a question of whether the American market will feel the same way. 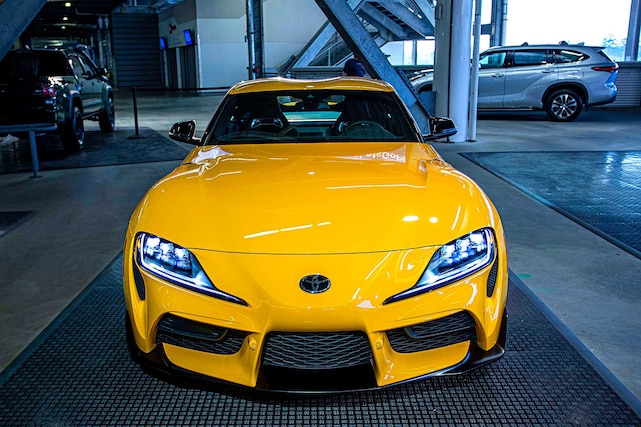 Pop the hood and the four-cylinder engine bay doesn't look too much different except a different engine cover (four painted lines instead of six) and more space in front. The 2.0-liter inline-four is a powertrain shared with the BMW Z4 and recognized as the B48. Features a single twin-scroll turbo, direction injection and continuously variable valve timing. Horsepower is rated 255hp at 5,000 to 6,500 rpm, while torque is 295 lb-ft at 1,550 to 4,400rpm. We will not be getting the 194hp iteration that's available in Japan. The same eight-speed ZF automatic from the inline-six model is used in the four-cylinder. Lastly, Toyota estimates its 0-60mph is 5 seconds flat.

Associated downgrades with the 2.0 model

Aside from the smaller engine, the four-cylinder Supra will be stripped of its active diff and active suspension. The front brakes have also shrunk - the rotors going from 348mm to 330mm, and the calipers changing from a four-piston Brembo setup to single-pistons. Inside, the radio is affected with a basic four speaker system coming as standard, as well as manual seats. 18-inch cast wheels are equipped as opposed to the 19-inch forged ones offered in the inline-six, and if you're looking close enough, you'll notice the exhaust tips are slightly a smaller diameter. 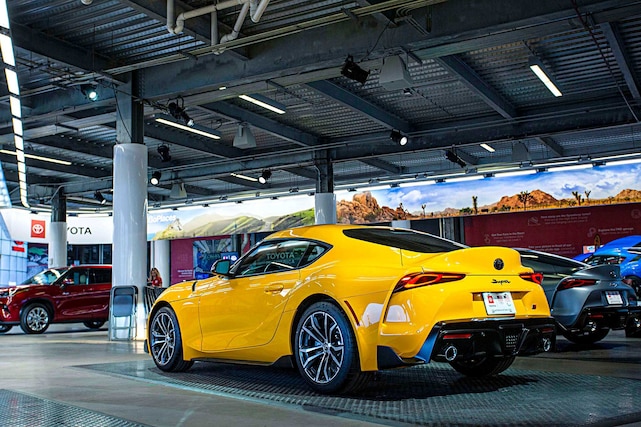 What the Editors Thought

I can't recall the last time a newly released vehicle has carried as much disdain as Toyota's new gen. Supra. From the lack of manual option to the BMW collaboration, it's almost like Toyota asked what enthusiasts would like the most and then did the opposite. Word about the 4-cylinder option hitting U.S. shores will surely add fuel to the Bavarian fire. We saw a similar effect when Ford launched a turbo-4 Mustang and the domestic world turned upside down. In similar fashion, Toyota's announcement will undoubtedly cause an uproar but the weirdo, nerdy car guy inside my head is wondering if there's a level of potential being ignored here. Sure, it's missing that set of additional cylinders that the Supra has long been known for but in terms of power producing potential and all-out tuneability, could the 4-cylinder put up a fight? Most in the U.S. will ignore this model's improved balance and lighter weight and instead opt to focus solely on horsepower numbers. Others will tell you that the car doesn't have the potential to make 4-digit power numbers like the 20-plus year-old 2JZ and that's fair, but keep in mind the market that Toyota is aiming toward with this 4-cylinder model certainly isn't the hardcore race crowd or the local stoplight grand prix champion. As you view the comments on social media that demand AWD, 500+hp and an inherent ability to make fully built 2JZ-type numbers, remember that not every buyer is after that goal.

It pleases me to no end that this car has been so unnecessarily divisive - while Toyota is obviously looking to grow the Supra brand and heritage, and generally keep lovers of sports cars happy, so many (let's face it, Mk4) "purists" would be content going back in time and doing things the old way (only in 2020 could such a tiny minority of enthusiasts carry so much weight). I'm honestly more intrigued about what Supra Chief Engineer Tetsuya Tada has gone on the record to say about the A91's automatic transmission and how a manual will likely never be in the cards for this platform. When an OEM as big as Toyota says stick shifts are no longer viable, for any of their cars, you can bet the gearbox's days are numbered.