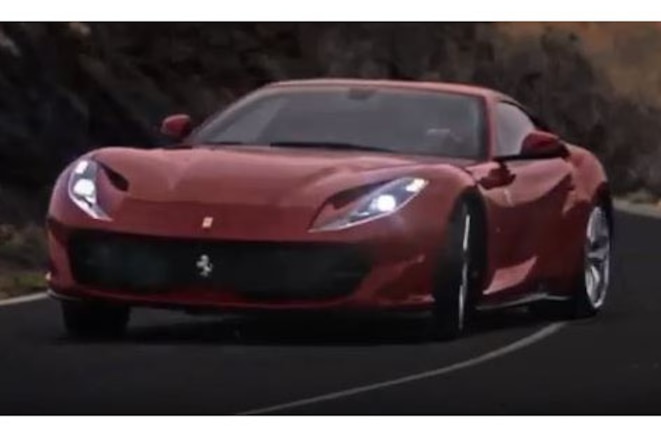 After appearing at the Geneva Motor Show last week, the Ferrari 812 Superfast makesits video debut on the automaker's YouTube channel. Now, we can finally hear how that engine sounds.

Normally, we aren't fans of the histrionics that go into car commercials. Yet, this Ferrari video has it all: the dramatic music, the dark and lonely road, a guy that looks like Clive Owen (wait, is that Clive Owen?), and even explosions of water that appear as the supercar passes through the road. Somehow, the theatrics work given the type of car that's featured.

Living up to its name, the Superfast boasts a top speed of more than 211 mph and an estimated 0-62 mph time of 2.9 seconds. It comes equipped with Ferrari's most powerful engine ever: a mid-front-mounted 6.5-liter V-12 that produces 789 hp and 530 lb-ft of torque. A whopping 80 percent of that torque is available at 3,500 rpm, improving the car's response even at low revs.

The introduction of the Ferrari 812 Superfast coincides with Ferrari's 70th anniversary, a topic that was celebrated in another recent YouTube video the automaker released.In that video, Ferrari celebrated the 125 S that started it all.

Now enough of the preamble. Watch the video of the Ferrari 812 Superfast below and judge that engine sound for yourself.