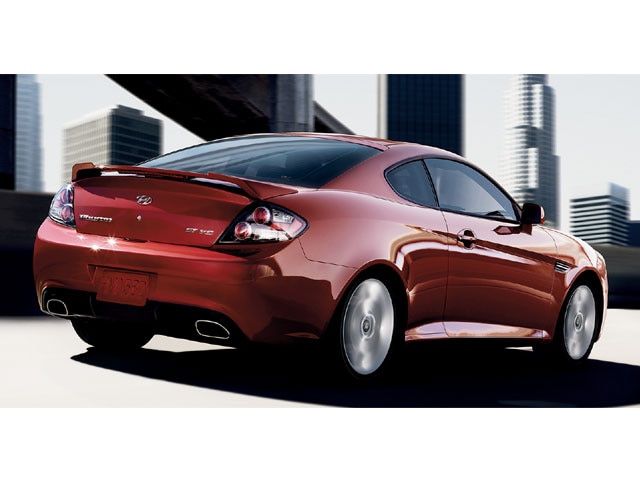 Not to be outdone by their sales competitor, Hyundai has also decided to dive head-first into a U.S. drifting program and future Time Attack participation. Unknown to the public, Hyundai marketing executives and product planners have been quietly attending local drift competitions, polling youth and talking to local tuner shops. 2nr readers may not have paid much attention to the Hyundai Genesis concept car that debuted in April, because it looked like a Lexus sedan, but there are BIG plans for the new rear-wheel-drive platform (code-named BH) that underpins Genesis-namely, a modified platform with a shortened wheelbase to be used for a new coupe to replace the outgoing Tiburon. The Pininfarina-designed Tiburon was pleasant to look at, but a big 2.7L V6 that only put out 172 hp failed to inspire buyers who would rather shell out the same money for an Acura RSX. The '08 replacement is rumored to be a formidable opponent to the upcoming '08 Nissan 350Z, with similar overall dimensions. Powertrain specifics for the Tiburon replacement are still in question, with rumors abound that the V8 from Genesis could find its way under the hood of this (approximately) 3,200-lb coupe. There are also rumblings of a turbocharged V6, as Hyundai (through its partnership with Chrysler and Mitsubishi) uses many of the same parts found in the 2.0L four-cylinder "world engine" found in the Caliber and Lancer.

Mitsubishi has commissioned two California tuning shops to build two converted rear-wheel-drive vehicles to begin its tentative foray in drifting. The two Lancer Evolutions being built were last seen in the The Fast and The Furious 3: Tokyo Drift, and have very mild modifications since they were only movie-ready. The vehicles will compete in NOPI Drift and debut at a yet to be announced Formula D event. The success of the two-car team is contingent on Mitsubishi's future commitment to a full-fledged effort in drifting with a new Lancer Evolution X.

Word out of Japan is that Nissan will be bringing over the JDM Cube to the United States for 2009 as a Scion competitor. The current generation Cube (which obviously looks exactly like it sounds) is powered by the same 1.5L HR engine found in the subcompact Tiida (known as Versa in the states) and has a four-wheel-drive option. The next generation model, which will likely come in late 2008 for the '09 model year, will use the Versa's current MR18DE with CVT. In Nissan-speak, that translates to a 1.8L inline four mated to a continuously variable transmission. Current horsepower is rated at 122.

Lexus Lf-A Spotted Testing AT nurburgringRumored V10 Engine Goes Head to Head With 2009 Acura NSXFollowing in the grand tradition of luxury automakers, the time has come for Lexus, the top selling luxury import brand in America, to debut its very own supercar. The LF-A, which first debuted at the Detroit Auto Show two years ago, brings a much-needed sports car into the product lineup. Spy videos have recently emerged on the internet of the vehicle testing at Nurburgring, and those in the know say that a well-tuned ear can easily distinguish the difference between a V8 and a V10 engine and there's no doubt, that's a V10 under the hood. It makes perfect sense, especially since Acura announced in January that their NSX replacement supercar would feature a V10 engine.

The vehicle is expected to produce at least 500 hp, putting it in striking distance of the Europeans, and will likely be mated to a sequential transmission gearbox. Top speed will be close to 200 mph. Of course, the price is expected to surpass well into six figures.

Hybridsupra Enters24hour RaceToyota has made no secret of its plans to incorporate its hybrid powertrain into motorsports. Last year Toyota Team SARD (Sigma Automotive Racing Development) entered a race-prepped Lexus GS450h in the Tokachi 24 Hour Race in Hokkaido, and finished 4th in its class and 17th overall. This year, SARD will be reviving its famed JGTC Supra but breathing new life into it with a hybridized GT-spec 4,480 cc 3UZ-FE V8 producing 480 hp and 376 lb-ft of torque.

Like a conventional hybrid, such as a Toyota Prius, the race-spec car will use regenerative braking, which recharges the lithium battery. But unlike the little eco-friendly sedan, this car will feature a pair of 10kW in-wheel motors up front and a 150kW motor in the rear. It will weigh approximately 2,300 pounds.

Hondaownerssouthern CaliforniarejoiceA feel good story for those who can't live without their front-wheel-drive vehicles: For the past five months, the Southern California Honda Dealers Association has been dispatching logoed employees to pump gas at gas stations, assist with carrying groceries at the supermarket and hand out popcorn at movie theaters. At one local gas station, customers looked on helplessly as Honda owners were treated to $40 worth of free gas and complimentary window washings. The reason? Just for owning a Honda. The campaign of goodwill is tied in to a current marketing ploy to emphasize customer service and connect that with purchasing a Honda.

Pikes peakRhys Millen To Compete AtFormula Drift pro driver and motorsports standout Rhys Millen will run the Pikes Peak International Hill Climb for his 15th time, this time taking the Red Bull Pontiac Solstice GXP to compete in the newly formed Time Attack Class. Millen is a six-time winner at the world's most treacherous rally course, and holds two records. Unlike other classes that allow for nearly unlimited vehicle modifications, the Time Attack Class is specifically for production-based, two-wheel-drive modified street cars and is a clear nod to the popularity of sport compact cars. Millen's vehicle uses a modified 2.4L ECOTECH engine that produces 550 hp.

Pikes Peak is the world's highest auto race, starting at 9,400 feet and finishing well above 14,110 feet. With 156 turns and 12.42 miles of dirt and pavement and little railing to protect drivers, it is not for the faint of heart.

Redemption At Last For Owning Boring, But Fuel Efficient and Reliable, Cars

Import Tuner
Time Capsule 1985 Honda Civic Hatchback
You don’t find many older Hondas in the sort of condition that this 1985 Civic 1500S was found in and, if you do, and you’re immediately hit with throwback vibes and rich memories of piloting the same sort of chassis during “spirited driving encounters” on the streets 30-or-so years prior, then you don’t let it
Rodrez – Apr 15, 2021

Import Tuner
Rotary-powered Suzuki Samurai
That a Suzuki Samurai is being featured by Super Street shouldn’t come as a complete shock to some of our long-time fans who know we love capturing something unique. Sure, it’s not a common occurrence and in fact, I can’t recall ever having featured one in the past, but this example, owned and built by
Rodrez – Apr 9, 2021

Check out the 2003 Hyundai Tiburon that features a combination of decent handling, good power, a great transmission, and a rear 3/4 view somewhere between Mercedes' CLK and Ferrari's 456M. - Sport Compact Car Magazine

Ricky takes Hyundai's new Tiburon for a spin and is pleasantly surprised. Check out his thoughts in Super Street Magazine.