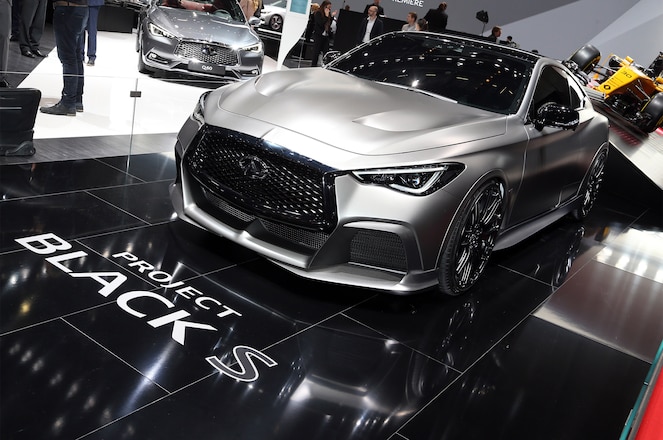 A ton of lip service gets paid to translating racing technology to road cars, and there were high hopes that when racing's premier league introduced kinetic energy recovery systems (KERS), our Priuses and Volts might be joined by uber-cool green performers. It hasn't happened yet—at least not for folks shopping in the sub-million-dollar market. Well, the Renault-Nissan Alliance aims to put its F1 budget money where premium brand Infiniti's hungry mouth is by introducing a fire-breathing Q60 range-topper featuring a two-motor performance hybrid drivetrain developed in conjunction with the Renault Sport Formula 1 team and using the exact same strategy behind the two motor/generators that boost this season's R.S.17 F1 race car. If/when it does, it will likely be the first production car to feature electric exhaust-energy recovery. 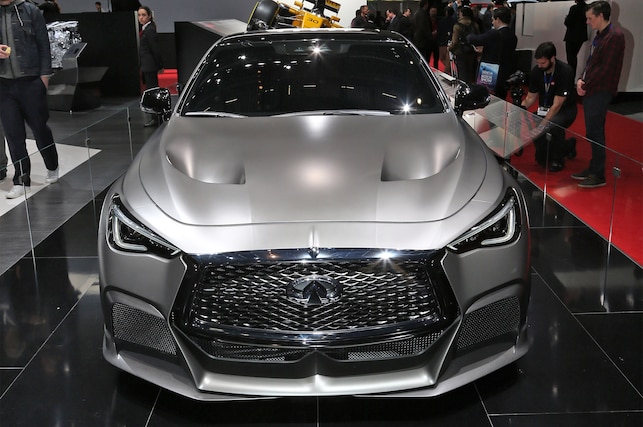 That's right. The two motors on this car don't go where everyone else puts them. The traction motor/generator mounts to the end of transmission, powering the rear wheels directly. The other motor/generator attaches to the turbocharger, helping spool it up instantly to eliminate turbo lag at low engine speeds. Then at high revs, when the exhaust is barging through that turbine at full whack anyway, it works as a generator by siphoning off a bit of electricity and sending it to the battery. I asked Tommaso Volpe, Infiniti's director of global product strategy and motorsport, how much energy could be recovered or what a rough ratio might be for kinetic to turbine energy recovery. He declined to get specific—even on said ratios for the F1 car. 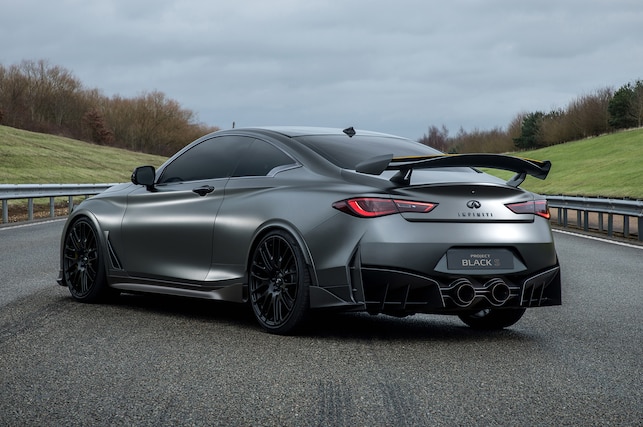 Not that knowing such specifics of how the F1 car works would translate very directly, as no parts are shared at all between the race car and the road car. (This is a good thing—F1 powertrain durability cycles are several orders of magnitude lower than those of any reasonable road car.) What is shared is the philosophy and to a lesser degree the sophisticated control strategy that tells the electrons where to go and what to do when entering and leaving the battery. (That battery is said to use similar lithium-ion chemistry to that employed on Infiniti's Direct Response Hybrid system). Volpe did say that the engine-control computer required to orchestrate such electronic coming and going via these motors will need to be much bigger and more powerful than anything the Alliance currently has on the road. No solid estimates of power and torque were provided, but the 400-hp twin-turbo V-6 will carry over virtually unchanged from the Red Sport 400 model. The hybrid gear will need to add at least 25 percent to that, or it's not worth doing. So figure 500 hp minimum.

Volpe says the size of the battery and the ideal strategy for this road car has not yet been settled upon. "You could design a car to go as fast as possible for three laps [of a given track] and then slow down, or it could last for 10 laps, or 300 laps. What is important is that we provide the driver some control over this strategy." He pointed out that F1 drivers have such control, as they operate the cars very differently during qualifying—one or two sand-bagging laps to juice up the batteries then one or two hot-as-possible laps to get the number. Optimizing the car for a record-setting lap of the Nrburgring would be difficult and would likely require a bigger battery than what the average back-road-storming, weekend-track-day owner would ever need. But you can expect to see some sort of driver setting for short-duration max power delivery on the order of a push-to-pass function at a minimum. 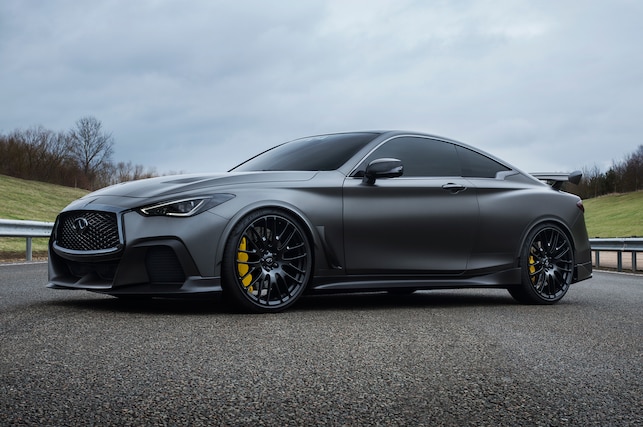 The rest of what you see in the concept car being unveiled this week in Geneva is a best-guess launching point from which the serious development work can progress. Infiniti's executive design director, Alfonso Albaisa, walked me around the Project Black S and the R.S.17 to point out design influences. Besides the Sirius yellow accents on the Q60's calipers and the rear edge of its wing, the road car's deeply sculpted forms that frame the grille were inspired by the vertical air deflectors just aft of the front wheels; the racer's carbon-fiber ground plane inspired the road car's front splitter and body side rocker extensions, and the racer's many whiskers and flicks inspired the forms in the fender air extractors aft of the front wheels. The rear diffuser and wing aim to significantly increase rear downforce, and they might indeed do the job as presented. But Albaisa acknowledges that to date these forms have only been subjected to rudimentary computational-fluid-dynamic analysis. Real wind-tunnel work might render the final pieces unrecognizable.

The concept wears matte gray paint and 21-inch forged wheels wrapped in 245/35R21 Pirelli P Zero tires all around, and it features a lowered suspension. It also employs a slick-looking center-outlet titanium exhaust system, but all such details will likely be revised during what we're told should be a two-year minimum gestation period for this beast. When it does arrive, look for pricing competitive with similar AMG and M offerings. 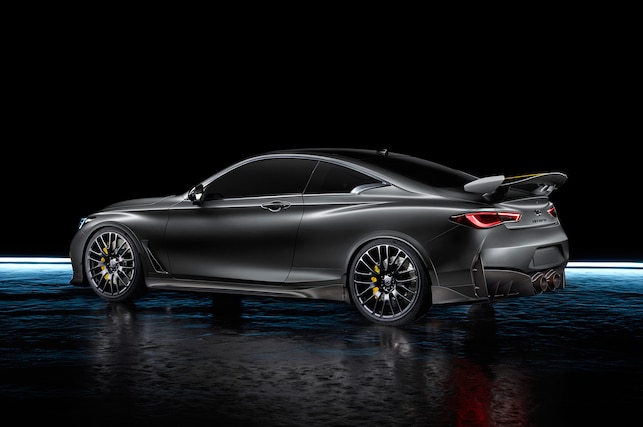 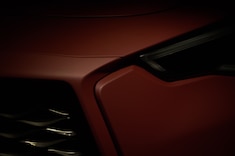 With the help of AMS Performance, Infiniti has squeaked out more horsepower and more torque from the Q60.