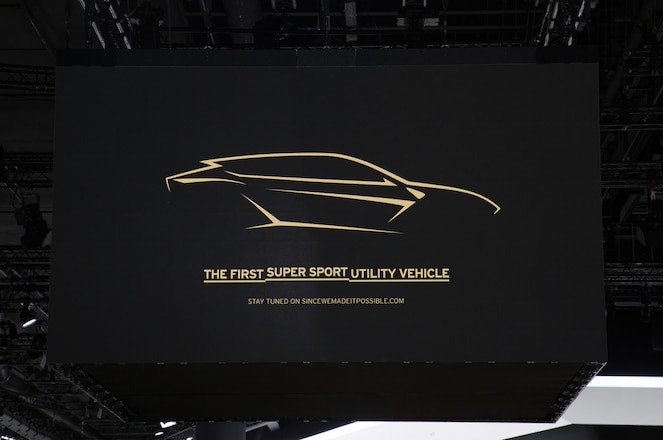 It was more than five years ago that Lamborghini introduced the Urus concept. So it's about time the automaker set a date for the reveal of the production SUV.

The Lamborghini Urus will debut on December 4 in Sant'Agata Bolognese, Italy. Ahead of the event, Lamborghini revealed a teaser, although the concept Urus probably gives us a better idea of the final model's design. We've seen prototypes running around with a familiar raked roof and vent-happy front end.

Expect the standard Urus to feature a twin-turbo V-8 engine packing 650 hp. A plug-in hybrid version should arrive a year after the regular model. The SUV is expected to more than double Lamborghini's annual sales, and production of the SUV could hit 3,500 units a year by 2019.

Lamborghini isn't giving much else away, but promises the SUV will have "the distinctive dynamic design DNA of a Lamborghini super sports car."

Of course, it's too early for Lamborghini to announce prices. But we suspect the model will start somewhere around $200,000 here in the U.S.

According to previous reports, the Urus will go on sale in Europe by the second quarter of 2018 before hitting the U.S. market in the third quarter.

Watch the video below for a teaser of the Urus and a glimpse at Lambo's original SUV, the LM002.