Rides on next-gen platform and is powered by Skyactiv-X 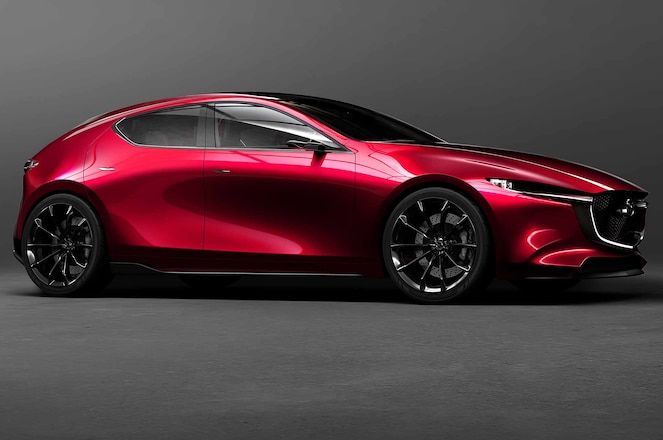 Mazda unveiled the Kai Concept at the 2017 Tokyo auto show, and the show car previews the design of the next-generation Mazda3 hatchback. Along with the Vision Coupe Concept, the Kai Concept hints at the next evolution of Mazda's Kodo design language. Some elements of Kodo 2.0 can already be found on the second-generation CX-5 crossover.

Mazda says that Kai literally translates to "the pioneer," hinting that the next Mazda3 will be the first to utilize the latest Skyactiv platform, the new Skyactiv-X compression-ignition engine, and the newest evolution of its design ethos. Some of the key design elements of the newest version of Mazda's design language include a wide three-dimensional deconstructed grille, thin headlights with chrome strips that connect to the lower part of the grille, and a cab-rearward design featuring a long hood and a swooping roofline that gives the Kai Concept a coupe-like silhouette. 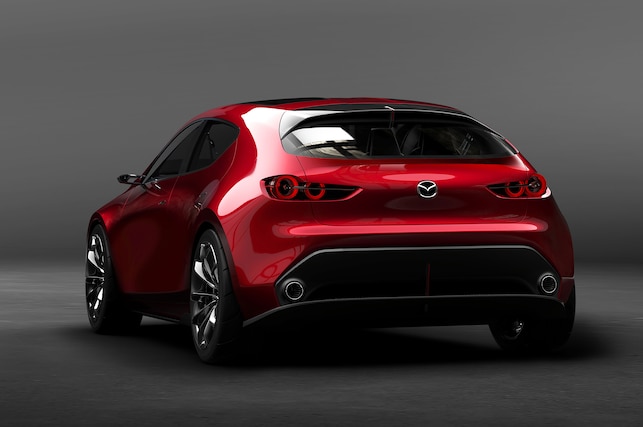 Designers did away with character lines and replaced them with punctuated surfaces that have constantly changing reflections. This was done in an effort to simplify the car's design while keeping it emotional and eye-catching. The Kai Concept's rear end is more rounded than the current Mazda3's and it features a thicker C-pillar. Its taillights are clearly inspired by the RX-Vision Concept, featuring two round LED clusters. There's a blacked out roof spoiler above the rear window that features a thin LED light strip. Lower in the rear fascia are split dual exhausts integrated into the diffuser. Inside, Mazda has designed the cabin with a driver-centric layout and continued with the same minimalist theme, with the main gauge cluster placed directly in front of the driver.

The Kai Concept rides on the latest iteration of Mazda's Skyactiv platform and measures 174 inches long, 73 inches wide, 54.1 inches tall, and has a 108.3-inch wheelbase. This makes it 1.6 inches shorter, 2.7 inches wider, and 3.2 inches lower than the current-generation Mazda3, with a wheelbase 2 inches longer. Powering the Kai Concept is a variant of Mazda's upcoming Skyactiv-X engine that uses spark plugs to initiate compression ignition. It is expected to deliver between 10-30 percent more torque and 20-30 percent better fuel economy than the current Skyactiv-G engines.