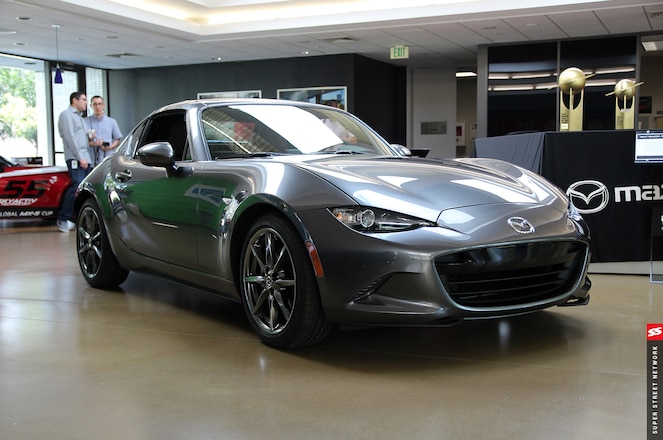 Weeks after Mazda made waves back east with its introduction of the MX-5 RF at the 2016 New York International Auto Show, we got word the concept would be spending a few days at Mazda North America Operations (MNAO) before getting crated up and shipped back to Japan. It just so happens those headquarters in Irvine, Calif., are a stone’s throw from our offices in Santa Ana, and when reps came calling to see if we wanted to check out the fastback version of the fourth generation Miata (“ND” in chassis speak), they didn’t need to ask twice. We were practically banging down their front door when the day arrived to spend time with the RF.

As in pictures, the MX-5 RF is a stunner in person, oozing speed and athleticism and class and sexiness all in one look. MNAO design director Julien Montousse gave the assembled press the nickel tour around the design of the car, and we got to see the retractable hardtop in action, taking just shy of 13 seconds for it to get tucked away. Only the roof and rear window collapse into the back half of the car, and if we heard right the stowed top sacrifices nothing in the way of trunk volume. Furthermore, with the exception of a 5mm increase in the height of the roof, MX-5 RF maintains the same overall length, width, and wheelbase as the soft-top model. 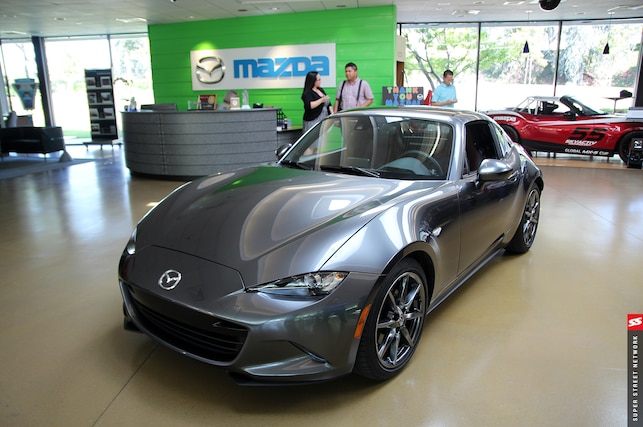 In North America, the 2017 MX-5 RF will rock standard a Skyactiv-G 2.0-liter inline-4, which produces 155hp and 148 lb.-ft. of torque in the soft-top variant. We’re expecting the RF to come standard with a six-speed manual gearbox, while a six-speed automatic should be an option. Beside the folding hardtop, Machine Gray body coloring (like on Mazda’s CX-9), Auburn-colored Nappa leather seats, and gray stitching throughout the cabin are all unique to the car. While it will be known as the MX-5 Miata RF – the “RF” standing for “retractable fastback” – there will be no badging with the RF letters. 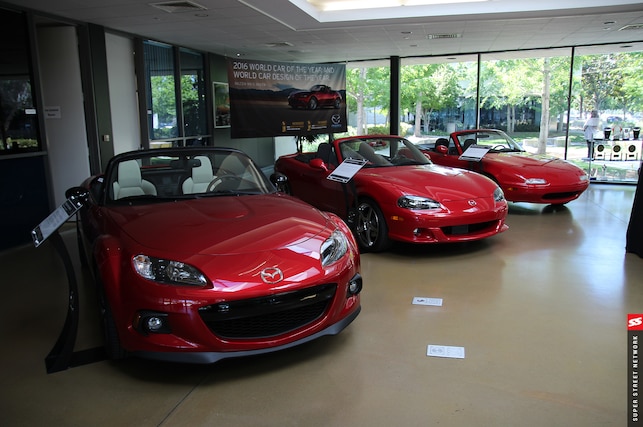 In addition to the MX-5 RF display, MNAO had set up a trio of Miata it pulled out of its 75-car heritage collection, namely first through third generation examples of the roadster. There was a first gen. with VIN number 15, which was one of three cars revealed at the 1989 Chicago Auto Show where the Miata made its global debut; a second gen. 2004 Mazdaspeed MX-5, we’re told the 750,000th Miata ever built; and a third gen., which is one of the last 25th anniversary edition versions. Number zero of 100, the NC MX-5 boasts Soul Red paint, almond leather, and a power retractable hardtop roof. Finally, Mazda had one of its Global MX-5 Cup cars among the mix, a turnkey racecar you can buy from Mazda specifically designed for the 2016 MX-5 one-make series.

We can’t wait to hear when the car goes on sale in North America. Dip into the gallery to see the 2017 Mazda MX-5 Miata RF from all angles. 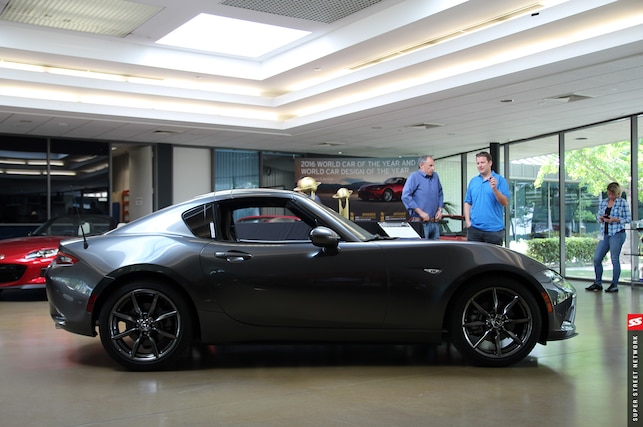