The race car concept - now downloadable and playable in Gran Turismo Sport on PS4 - is a screamer. 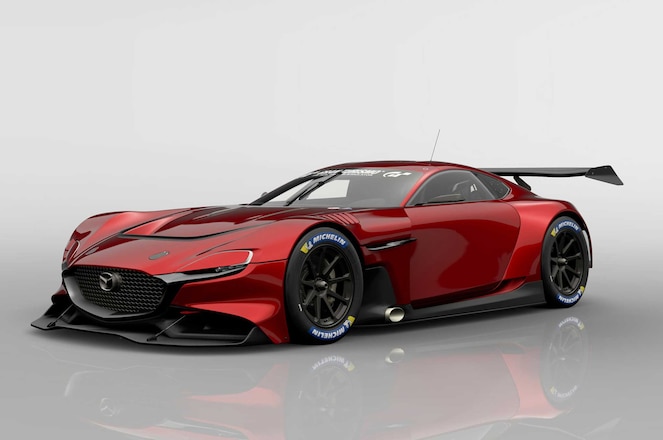 The Mazda RX-Vision concept is just too good a design to exist merely as a static object, a concept car without a future out on the road. Its long nose and dramatically swept-back cabin are simply begging to be viewed in motion. If you've been waiting for the day this low-slung sculpture on wheels becomes fire-breathing, rotary-powered, roadgoing thing, that day is here. Well, virtually at least. The Mazda RX-Vision GT3 Concept is now downloadable and playable in Gran Turismo Sport on PS4, and it is awesome.

The Mazda RX-Vision GT3 Concept takes the already-hot RX-Vision's original design and reimagines it as a full-blown race car (hence the "GT3" in the name). The fenders now walk that fine line between cartoonishly wide and GT racer flared wheel perfection. The RX-Vision was low to begin with, but the GT3 version takes it to the very edge of realistic ground clearance with a large carbon-fiber front splitter, a rear diffuser that hangs millimeters above the tarmac, and a gigantic rear wing that in theory squats everything down even further. It's glorious, and we wish it was real.

This RX-Vision might be in-game only, but a recent patent filing could hint that a real-life successor to the RX-7 and RX-8 sports cars are on their way. The patent details a front-engine, rear-drive car powered by a Wankel rotary (among other possible combustion engines) and supplemented by a complex hybrid system comprised of in-wheel electric motors up front, a supercapacitor, another electric motor behind the engine, and a small lithium-ion battery pack. It's a crazy idea, but if Mazda was considering putting such a drivetrain into production we imagine it would appear first in a flagship supercar like the on-again, off-again RX-9.

From the Editors of Super Street: After posting the wild video of David Mazzei's absolutely rowdy 1,000hp, F1 car-sounding, 4-rotor FD3S RX-7 on the dyno just a couple weeks ago, we were kinda stoked to see game developers get both the look and sounds of the virtual RX-Vision Concept correct (or that's what it would sound like if we brought it to life). It's brilliant marketing, and while it's not quite the same as getting the real thing from Mazda, we'll take it.

Whatever Mazda is planning, for now you can at least see the RX-Vision in action in Gran Turismo Sport and dream of what could be. The RX-Vision GT3 Concept is available for download starting today.