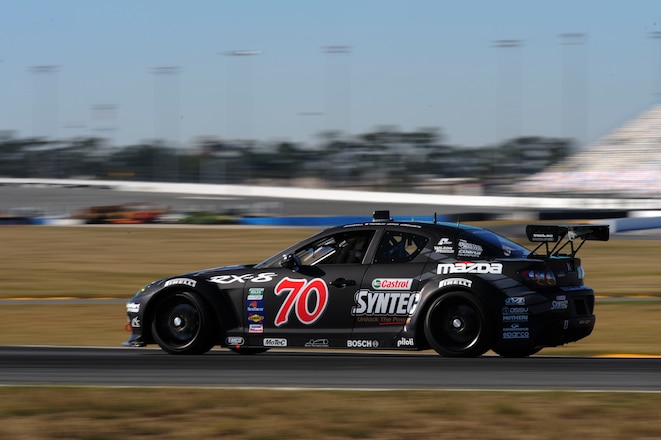 January 31, 2010 (Daytona Beach, Fla.) - With 22 class wins in the annual Rolex 24 at Daytona, expectations were high in the Mazda camp. The key is in total preparation and maintaining focus for 24 hours under extreme pressure. The 2010 race covered all of the highs and lows of racing. The Mazda cars swept the top three positions in qualifying before running into a variety of minor problems and old fashioned bad luck in the early hours. Perseverance by the Castrol Syntec SpeedSource RX-8 #70 team of Sylvain Tremblay, David Haskell, Nick Ham, and Jonathan Bomarito resulted in a come from behind win.

The SpeedSource team started the race in third place, but lost a lap when a caution flag came out after they had pitted. They lost another six laps after being hit by a Daytona Prototype (DP) car approximately 8 hours into the race. The team spent the next ten hours methodically moving up the charts until taking the lead at lap 563 in the 20th hour. They held the lead to the end, completing 707 laps of the 3.56 mile Daytona circuit for a total distance of over 2,500 miles.

"The SpeedSource team lived up to the MAZDASPEED spirit of 'The Will To Never Give Up'. Thanks to the entire team from drivers to the shop guys who built the cars, to the support crew. As soon as the checker flag dropped, we were flooded with e-mails, phone calls, text messages, and twitters congratulating the team. The RX-8 rotary power was flawless, and our bad luck in the early hours was countered by others having issues later in the race. Even when SpeedSource took the lead on lap 563 there was no celebration - just a resetting of the deck with a race still to win."

"Everyone at Mazda in North America. and Japan is proud of our association with the Castrol Syntec SpeedSource team. This is their second win at Daytona and the 23rd for Mazda and is dedicated our dealers and 9,000 club racers. They are the heart and soul of our operation. Now that our season has begun we are looking forward to a year-long battle for the Grand-Am GT Manufacturers Championship, " noted Robert Davis, Senior Vice President, Product Development and Quality, and the man responsible for Mazda's North American motorsports operations under the MAZDASPEED Motorsports Development banner.

In addition to the winning Castrol Syntec RX-8, Mazda was represented by a strong line-up of teams. These teams will allow Mazda to launch their most aggressive challenge for the Grand-Am GT manufacturers championship.

43 Team Sahlen RX-8
Drivers: Joe Nonnamaker/Wayne Nonnamaker/Will Nonnamaker/Joe Sahlen
Qualified: 14th Finished: 7th
Notes: A solid run by the Nonnamakers and Sahlen family team. They were in a head-to-head battle with the #40 RX-8 in the closing laps missing 6th place by less than three seconds.

In addition to the Rolex 24 Hour, the Daytona weekend was also the season opening race for the Continental Tire Challenge Series. This was the first ever professional race for the 2010 MAZDASPEED3.

About Mazda: Mazda is the brand of choice for road-racers across North America. More than 9,000 grassroots racers compete in various classes with the Sports Car Club of America (SCCA) and the National Auto Sport Association (NASA). Racers who are years away from earning a driver's license can now begin a professional motorsports careers in the Mazda family. A driver can begin in karts and progress through the Skip Barber series, Club Racing Formula Mazda, professional Star Mazda and finally to Formula Atlantic, all with Mazda. No other car company has ever connected the dots this way.

Celebrating its 40th Anniversary in the United States in 2010, Mazda North American Operations is headquartered in Irvine, Calif. and oversees the sales, marketing, parts and customer service support of Mazda vehicles in the United States, Canada and Mexico through nearly 900 dealers. Operations in Canada are managed by Mazda Canada, Inc., located in Ontario; and in Mexico by Mazda Motor de Mexico in Mexico City. 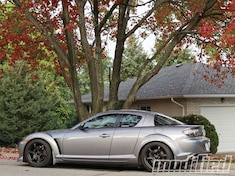